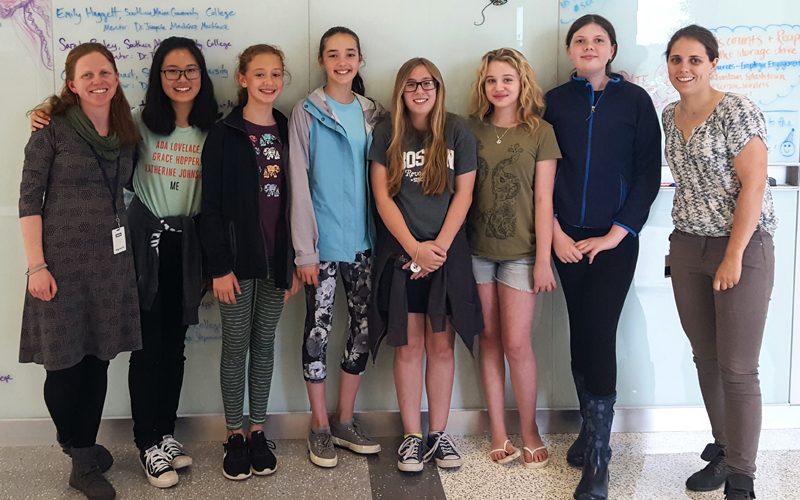 The Girls Who Code Club and their facilitators tour Bigelow Laboratory for Ocean Sciences.

Girls Who Code is a nationwide nonprofit that has a single mission: to close the gender gap in technology. After just six years, the organization has reached almost 90,000 girls in 50 states. Girls Who Code clubs focus on providing a friendly, encouraging, and supportive space for sixth- through 12th-grade girls to learn about computer science. The curriculum goes beyond learning how to code, and teaches the girls about teamwork, problem solving, and the process of designing, building, and testing a product. This is achieved through a computer science impact project, which is conceived, planned, and developed by the girls themselves.

The Midcoast Maine Girls Who Code Club, targeted at girls in grades six through eight, chose to build an advice-based website to help and encourage girls their age with problems they might face from bullying, fighting with friends, and relationships. The girls learned computer programming through the stories and a friendly “chatbot” they developed for their website with the assistance of their club facilitators, Julia Brown and Catherine Mitchell, of Bigelow Laboratory for Ocean Sciences, and Wendy Liang, a junior at Lincoln Academy.

Mitchell said, “In one of the first weeks, the girls brainstormed different ideas for their CS impact project, but quickly decided on the advice-based website. They have had lots of discussions on what form this website would take, what they would include on the website, and what each person would be responsible for. It has been great to see the girls work together throughout this process and grow together as a group.”

For the final meeting, the club had an outing to Bigelow Laboratory for Ocean Sciences. The girls had a tour of the facility, where they got to see the high-performance computers and server room, and met with scientists who use coding or build websites. After the tour, the girls presented their website to a small group of scientists and showed them the different stories they had created throughout the year.

Go to midcoastgirlswhocode.site to see what the girls have developed. The club is taking a well-deserved break for the summer, but more details will follow about the club starting up again in the fall for sixth- through eighth– grade girls across the region. For any more information, feel free to contact the club facilitators through the website.