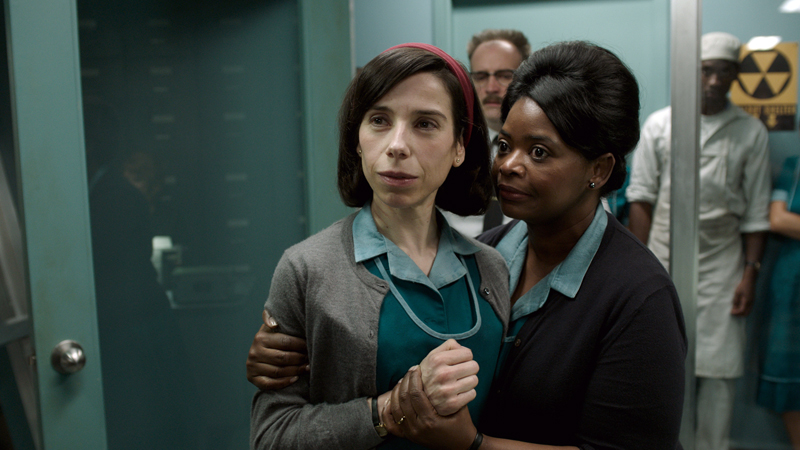 Sally Hawkins and Octavia Spencer star in “The Shape of Water.”

The Academy Awards take place this Sunday evening – and the nominees for Best Picture and other categories continue this week at Lincoln Theater. Will last week’s “Three Billboards” take home the grand prize? Or might this week’s “The Shape of Water?”

Steven Spielberg directs Meryl Streep and Tom Hanks in “The Post,” a thrilling drama about the unlikely partnership between The Washington Post’s Katharine Graham (Streep), the first female publisher of a major American newspaper, and editor Ben Bradlee (Hanks), as they race to catch up with The New York Times to expose a massive cover-up of government secrets that spanned three decades and four U.S. Presidents.

The two must overcome their differences as they risk their careers – and their very freedom – to help bring long-buried truths to light. “The Post” marks the first time Meryl Streep, Tom Hanks, and Steven Spielberg have collaborated on a project. Final screening Thursday, March 1 at 2 p.m.

Bob Marley takes to the stage in “Over 18 Only,” A Community Energy Fund of Lincoln County Winter Awareness Celebration.

Bob Marley, a Maine and beyond favorite, has toured extensively. He has been a guest on late-night television shows hosted by everyone from David Letterman and Jay Leno to Conan O’Brien and Craig Ferguson.

He also had his own Comedy Central special, and has appeared in several movies, including “The Boondock Saints.”

Season One of the theater’s Classic Film Club concludes with this multiple award-winner in which an ex-prize fighter turned longshoreman struggles to stand up to his corrupt union bosses.

Nominated for 13 Oscars! From master story teller, Guillermo del Toro, comes The Shape of Water – an other-worldly fairy tale, set against the backdrop of Cold War era America circa 1962. In the hidden high-security government laboratory where she works, lonely Elisa (Sally Hawkins, seen recently in the film Maudie) is trapped in a life of isolation.

Very few ballets can properly depict the Bolshoi’s overflowing energy and fiery passion as can Alexei Ratmansky’s captivating revival of Vasily Vainonen’s The Flames of Paris.

With powerful virtuosity and some of the most stunning pas de deux, the Bolshoi Ballet displays an exuberance almost too enormous for the Moscow stage and captured live that day. Playing Sunday, March 4 at 1 p.m. Tickets: $25/$23/$5.

Alan Magee has received awards for his painting from the American Academy and Institute of Arts and Letters and the National Academy of Design. Several television documentaries have been made about his work including the Maine PBS production, “Alan Magee, Visions of Darkness and Light,” and “Maine Masters: Alan Magee. “

Magee has been interviewed on Voice of America Radio, Monitor Radio in New York, WHYY in Philadelphia, Pacifica Radio in San Francisco, and on WERU in Maine. Thursday, March 8 at 7 p.m. Free.

Movie tickets are $8 and $6. Event ticket prices vary. For more information, go to lcct.org, call the box office at 563-3424, drop by at 2 Theater St. from 10 a.m. to 1 p.m. Tuesday-Thursday, or email info@lcct.org. Like Lincoln Theater on Facebook. Go to lcct.org to sign up for Lincoln Theater’s weekly email blast.