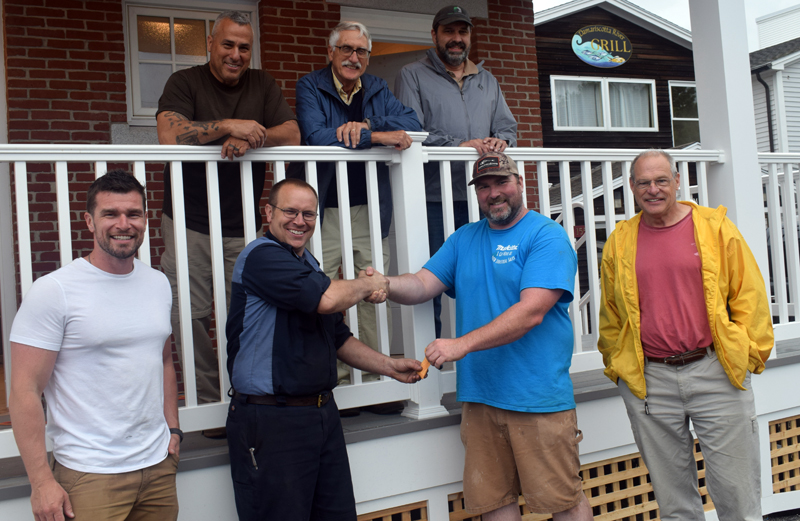 The long-awaited public restrooms in downtown Damariscotta opened right on schedule and just in time for the Independence Day fireworks show in the municipal parking lot on Sunday, July 4.

The keys to the newly built structure were given to town officials by the contractor, Rockport-based Phi Builders + Architects, on Friday, July 2 and the restrooms were opened to the public the next day.

Charlie Frattini, general contracting manager for Phi Builders, said on Friday that is was challenging for the construction crew to meet the deadline originally set when the project started last November, mainly because of supply issues.

“We’ve overcome a lot of challenges to get this open. They were challenges out of our control,” Frattini said. “My guys, they worked tirelessly to get this thing done. They were here until 7 or 8 o’clock at night for the last week.”

He said the sinks and toilet partitions are temporary due to supply delays, but updates will take place when the permanent parts arrive.

Damariscotta Town Manager Matt Lutkus said the restrooms have seen steady use since opening on Saturday. The hours of operation will be from 7 a.m. to 9 p.m. for the foreseeable future to gauge if adjustments need to be made to the schedule.

The Damariscotta Public Works Department will maintain the restrooms. One hour per day has been budgeted for this purpose. Lutkus said the town is currently looking for a seasonal employee to work in the public works department.

The completion of the restrooms mostly wraps up the first portion of the town’s overall waterfront improvement project, which also includes the replacement of sewer lines underneath the municipal parking lot.

The only work left to be done for the first portion of the project is paving on private property next to Cupacity, which will be performed by Topsham-based Crooker Construction LLC next week.

The remainder of the $4 million-plus project includes plans to raise and rebuild the parking lot, drainage improvements, and a flood protection system, all of which are still in the design phase. This work will start next spring at the earliest, Lutkus said.

The U.S. Economic Development Administration awarded the town a $3 million grant in April 2020 to cover the majority of the cost of the total project. The town is contributing $1,127,000, largely from donations.

The town is currently waiting for approval from the federal agency for a change order to lower the height of the flood wall from 5 feet to 3 feet.

Lutkus said that although the restrooms cost approximately $734,500 for the purchase of the land, design and engineering, and the actual construction, only $161,000 of that came from property tax dollars approved at annual and special town meetings. The balance was funded through $335,200 in donations and $238,300 in state and federal grant money.

Lutkus said he has been working towards the construction of public restrooms in town since the beginning of his tenure as town manager in 2012. This work included raising funds, applying for grants, and engaging in a public design process.

Lutkus said the chamber offered to pay for the restrooms if the town would maintain them, but the town did not agree.

An editorial in the Aug. 25, 1994 edition of The Lincoln County News agreed with the need, saying that the municipal parking lot is the “logical spot” for public restrooms.

“The Damariscotta Region Chamber of Commerce has completed its work and committee members have made recommendations to the town. A cooperative effort is needed for a common goal — make tourists feel important enough to provide them with a ‘comfort station,’” the editorial, titled “Making Tourists Comfortable,” said.

In 2016, the town began accumulating seed money in capital reserve accounts for the eventual waterfront project and restroom construction, through town meetings and donations.

At the 2016 annual town meeting, voters approved $11,000 for capital reserves and then approved $60,000 for the waterfront project as part of a bond issue at a special town meeting in November 2016.

Lutkus said the town was then able to leverage those funds to be awarded state and federal grant money, which allowed for the completion of the project.

The purchase of the land where the restrooms currently sit, which was previously home to a barbershop, was approved by town voters in March 2018.

The town then received bids for the restroom construction in November 2018, but all bids were significantly higher than the $300,000 the town had set aside at the time for the project.

A contract was then awarded to Damariscotta-based Medomak Construction Inc. not to exceed $373,000 in April 2019, but a performance bond could not be secured and the contractor had to pull out of the deal.

Lutkus said that the year-long delay for the restroom construction actually worked in the town’s favor, as it was then able to receive the U.S. Economic Development Administration grant that helped fund the project. In addition, the restrooms would have likely had to be closed in 2020 due to the COVID-19 pandemic.

“It worked out for several good reasons,” Lutkus said.

He also said that the town was fortunate to receive a low bid from a “solid company” in Phi Builders when the final construction contract was signed in September 2020.

The original approved contract amount is $546,991.50 and the total estimated construction cost comes out to $576,500 with five change orders, two of which included sewer project-related expenses.