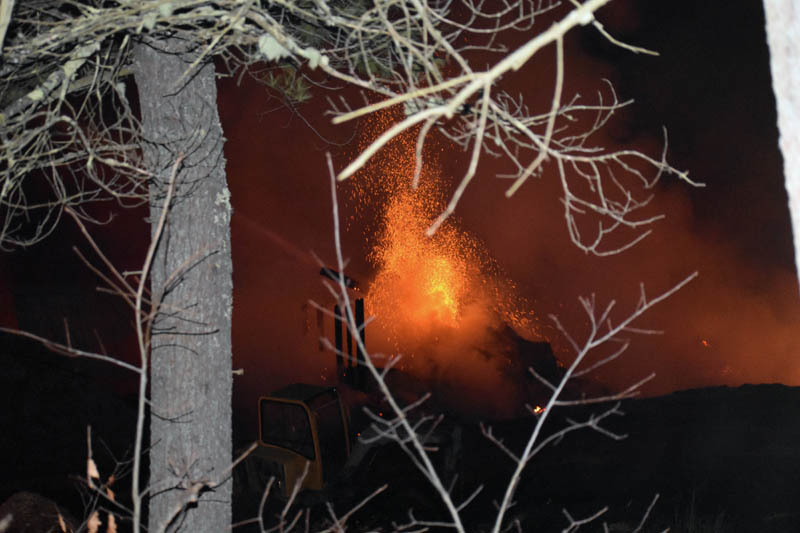 Fire destroyed a sawmill at N.C. Hunt Lumber in Jefferson early Saturday, March 30. The business will rebuild and hopes to have a new sawmill in operation in four months, though it will lay off 17 employees in the interim.

There were no injuries, according to Jefferson Fire Chief Walter Morris. Emergency medical services checked out an Alna firefighter for an unknown medical condition, but he was not taken to a hospital.

N.C. Hunt employees had repaired machinery inside the sawmill with welding torches Friday afternoon “and apparently a spark from those repairs started the fire hours later,” McCausland said in an email Sunday.

Morris believes the fire started earlier in the day.

“Someone thought they saw smoke in or near the walls, didn’t call the fire department, but was concerned enough that they had an employee stay late, posted a fire watch until about 9 p.m., by which point they hadn’t seen anything and left,” he said.

Anyone in a similar situation should contact the fire department immediately to investigate, according to Morris.

“We should have been called right away. We have tools, thermal-imaging cameras, we can quickly use,” Morris said. 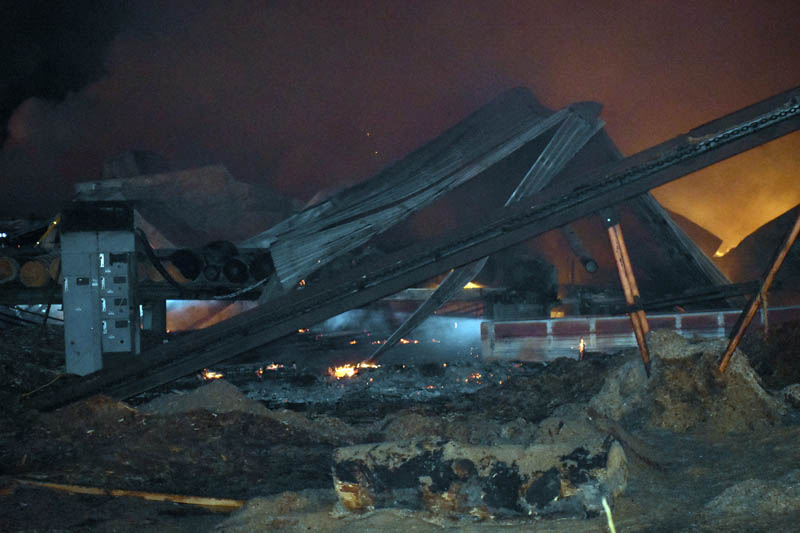 “Initial firefighting efforts were focused on preventing the spread of the fire to the many adjacent buildings, including the retail store, buildings containing high-voltage electrical equipment, a recently constructed dry kiln building, and several large lumber storage buildings,” Morris said.

As of 1:30 a.m. Saturday, the fire was “contained but not extinguished,” Capt. Chris Rigaud, of the Jefferson Fire Department, said at the time.

Crews were attacking the fire from multiple sides, with teams on the north and south ends of the scene, Rigaud said. A ladder truck from the Damariscotta Fire Department was providing the “master stream” for firefighting efforts.

A tanker shuttle was set up to draw water from Clary Lake and bring it to three portable tanks at the scene. Ten trucks made about 100 trips, Morris said.

“This required a tremendous amount of coordination and demonstrated that the devotion to training and preparation of all of our local firefighters paid off,” Morris said.

The sprawling N.C. Hunt complex at 200 South Clary Road includes a retail store, which remains open. The fire will not interrupt the business’s operations at its Damariscotta store or its off-site work, which includes earthwork and transportation.

N.C. Hunt Inc. was the 13th-largest private employer in Lincoln County as of the second quarter of 2018, according to the Maine Department of Labor.

According to Rob Hunt, president and co-owner of N.C. Hunt Lumber Inc., the fire did not burn accessory buildings as initially reported. He said the mill was a very large structure.

The Lincoln County Sheriff’s Office shut down Route 215 during the response. 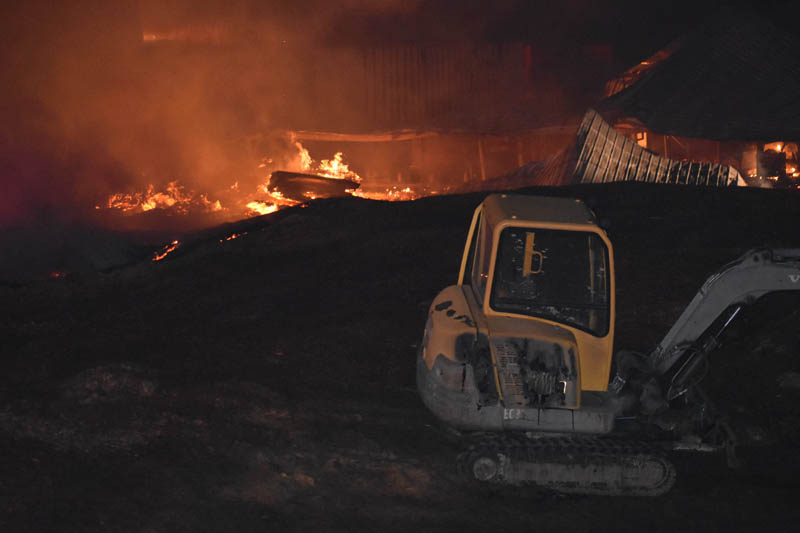 A total of 10 fire departments responded to the scene. Assisting Jefferson were crews from Alna, Chelsea, Damariscotta, Newcastle, Nobleboro, Pittston, Somerville, Waldoboro, and Whitefield, as well as the Lincoln County Firefighter Strike Team, the Lincoln County Hazmat Decon Strike Team, the Maine Department of Environmental Protection, and the Maine State Fire Marshal’s Office. The Bristol, Edgecomb, and Wiscasset fire departments were dispatched to provide coverage for towns at the scene.

According to Morris, the firefighter strike team was dispatched late Saturday morning to assist as crews worked to overhaul hot spots and completely extinguish the blaze.

“The strike team helped us rotate firefighters in and out and give firefighters a break, a chance to get coffee or something to eat. They were of tremendous assistance, helped us to put up all the hose lines and get everything cleaned up,” Morris said.

According to Morris, the hazmat decon team was dispatched late in the morning as well to assist with the cleanup of lubricant oil from machinery.

“There was some oil that spilled from some of the machinery. We did put pads down to contain it and pick it up, and used all the booms we had, so we called the hazmat team for additional pads,” Morris said.

DEP “assisted us with the cleanup and made sure all proper precautions were taken,” Morris said.

Morris expressed gratitude to all departments.

“I cannot emphasize enough our thanks to the outstanding efforts of our volunteer firefighters and first responders in Jefferson and all of our neighboring mutual aid communities,” he said. 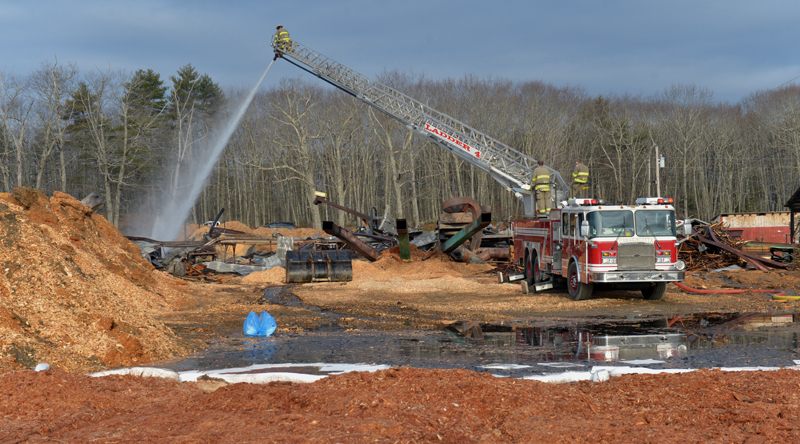 According to Hunt, the sawmill employed 30 people and 17 will be laid off as a result of the fire.

“We are trying to keep some people on, around a third to two-thirds of the crew, about 12 people to continue to run the planer mill and dry kiln,” Hunt said.

The company will help connect employees who are laid off with government programs that provide quick unemployment benefits.

“We normally have almost 80 people on the payroll and it’s going to be down to 54-55 for a while, but our goal is trying to get back to where we were,” Hunt said.

Hunt said the next step for the company is to clean up the site.

He said the company has fire insurance and will have enough to start over.

“We’re very thankful. The firefighters were incredible. We were fortunate that most of the damage to inventory and other equipment was contained 99 percent to the mill,” Hunt said. 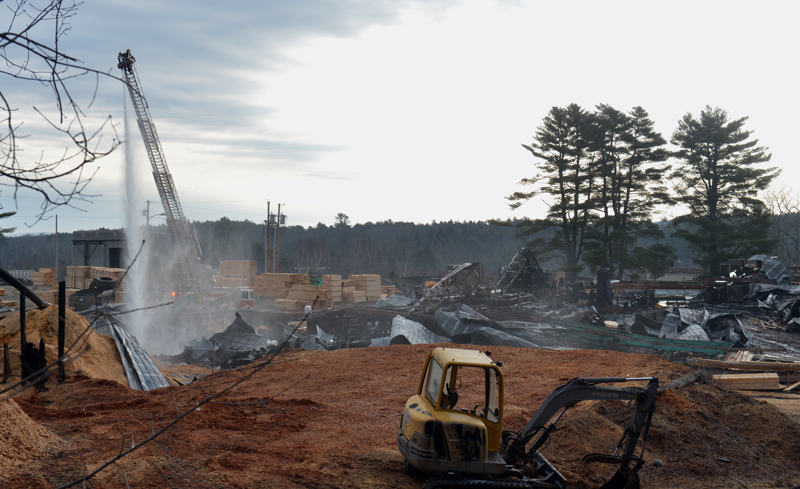 The Damariscotta ladder truck continues work at the scene of the N.C. Hunt Lumber fire in Jefferson on Saturday, March 30. (Paula Roberts photo)

Hunt said the goal is to have a new sawmill in operation on the property in about four months.

He expressed appreciation for support from the community.

“There has been a huge outreach from businesses in the community. It’s been incredible. I’m very humble to receive the support we have,” Hunt said.

Hunt said firefighters asked him what his plans were when he was at the fire scene early Saturday morning.

“We do trucking, earthwork, and have the two retail yards. We are very blessed to be diversified and that helps in surviving something like this,” Hunt said.

As the business proceeds with the rebuild, it will have to make a determination regarding three-phase electric power.

The closest three-phase electric power is at the Whitefield Superette, on Mills Road in North Whitefield.

“It would cost about $1 million … We’re working with (Central Maine Power Co.) and the government to see if there are any grants,” Hunt said. “We are trying to do that for the long term. It impacts on what we could do for the number of jobs here moving forward.”