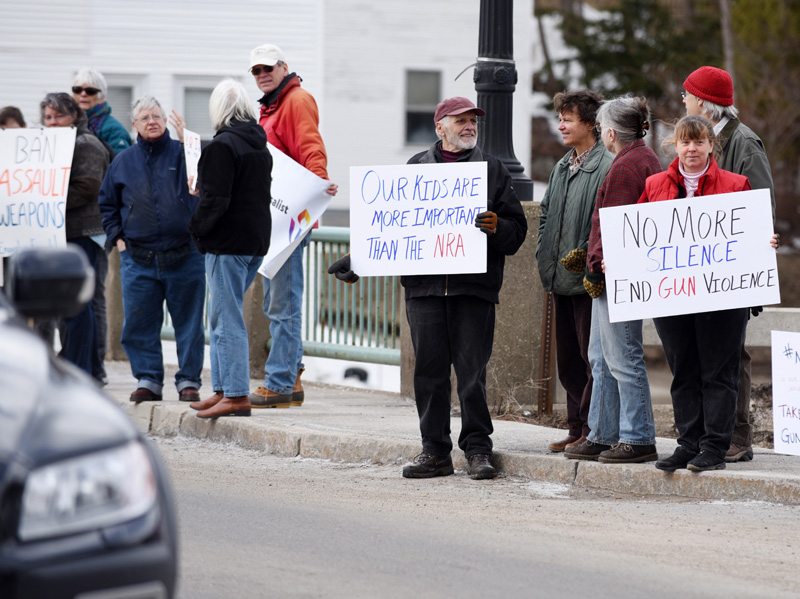 A crowd of people lined the Damariscotta-Newcastle Bridge from noon to 1:30 p.m., Saturday, March 24 as part of the nationwide March for Our Lives, an effort to prevent school shootings.

“It’s not about not wanting people to have guns … I do believe in the right to own guns, just not the ones specifically designed to kill people,” Caroline Bond, of Jefferson, said.

The national movement’s website reads, “March For Our Lives is created by, inspired by, and led by students across the country who will no longer risk their lives waiting for someone else to take action to stop the epidemic of mass school shootings that has become all too familiar.

“In the tragic wake of the 17 lives brutally cut short in Florida, politicians are telling us that now is not the time to talk about guns. March For Our Lives believes the time is now.”

“People are really stirred up,” Nathaniel Wing, of Boothbay, a member of Indivisible-Boothbay, said.

More than 800 marches took place Saturday, including one in Washington, D.C., according to the movement’s website.

Marchers on the Damariscotta-Newcastle bridge waved signs while many passersby honked their car horns and waved back or gave thumbs-up.