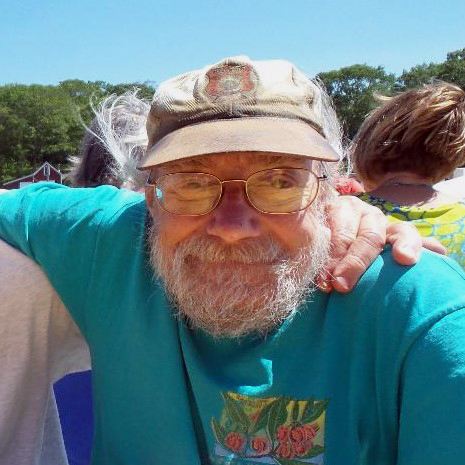 Mike Krepner, “legendary” histographer (his term for historian and geographer) and creative intellectual, died at his friend-built home in Waldoboro, on Nov. 7, four days short of his 70th birthday. His wife Ellie found him staring out at the garden, kale that he had just picked for his “Lucky Hand Ramen Soup Helper” on the counter and their dog, Nagy Kutya Tanc Farkas (Big Dog, Dancing Wolf), howling at his feet. He was a lucky man.

Mike leaves behind a trail of people who love him dearly, who will miss his witty repartee, their “irreverent and uproarious” conversations, his wild and true stories of guiding, hiking, botanizing and canoeing throughout his beloved world. Born in Baltimore, Md., friendships formed through the University of Maryland Terrapin Trail Club led to the formation of Native Trails, Inc. with Ron Canter and lifelong friend and kith brother, Randy Mardres. Native Trails was dedicated to researching and preserving pre-industrial travel routes. One of their major projects, and his pride and joy, was the Northern Forest Canoe Trail. Mike referred to Native Trails as the architect of the NFCT and Rob Center and Kay Henry as the contractors who took the design and made it into the popular 740-mile water trail it is today. Rob and Kay made his dream come true within his lifetime. He would emphasize that he didn’t want people to view it as a “through trail” but as one you would take to understand how history and geography (his term-histography) define the land use.

Mike came to Maine in the late ’70s with his college friends Andrew and Jean Benson and former wife, Marilyn Morrison. He was a Master Maine Guide, helped with Penobscot Riverkeepers and led many ocean-going canoe trips for AMC and Mountain Workshop. While not at the stern of a canoe, he was running his business Igas Island Company, creating designs and sewing backpacks, map cases and all manner of travelling gear utilizing solar power. While he sewed, he would listen to Maine Public Radio and over a thousand CDs and LPs of a stunning variety of ethnic, folk, classical and world music along with the howling of his dogs, several of whom were members of MPBN. Such was Mike’s humorous wit and view on life.

After his traumatic divorce, his visit to Hawaii in the ’80s, where his kith brother William Kramer and wife, Joan and daughter Anu lived, was a turning point in his life. He cherished his time in Hawaii and friendships formed there led to interesting travel and work opportunities throughout the world.

Mike enjoyed custom work, designing gear to meet a particular need such as caribou carrying slings for the Maine Caribou Project and hammered dulcimer carrying cases (how he first met his current wife in 1985). He could also be seen in his Borealis yurt at artisan craft shows or around his “craft fair wokfires” from Maryland to Maine where his “cantankerous wit, warm and hearty laugh and generous heart” won him many true friends who stayed in touch through the best and worst of times.

Mike had several near misses with death due to a disease, alcoholism, and a unique, creative mind that never shut off. After the last near miss on his birthday two years ago, he changed his ways and life was full again with botanizing road trips, mushroom foraging, delectable and creative meals, long talks with treasured friends and family and many happy trips around the world thanks to Google Earth.

To abide by Mike’s wishes, there will be no memorial service. Instead, a celebration of the many adventures he had with the people he loved will be held at Larchenburg on Fri., Dec. 21.

If desired, memorial gifts may be made in his name to one of the following three non-profits which enriched his life: Waldoboro Public Library, 958 Main St., Waldoboro, ME 04572; Maine Public Radio, 323 Marginal Way, Portland, ME 04104; or Northern Forest Canoe Trail, P.O. Box 565, Waitsville, VT 05673.

Condolences may be shared at hallfuneralhomes.com