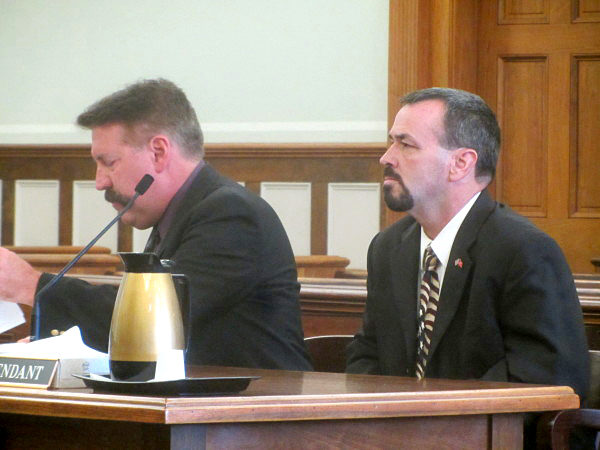 The veteran Lincoln County deputy sheriff indicted earlier this month on three counts of sexual abuse and 19 other charges has pleaded not guilty to all charges.

Kenneth L. Hatch III, 46, of Whitefield, said “not guilty” 22 times as Justice William Stokes asked his plea to each indictment. Hach is accused of sexually abusing three girls, including one who was 6 years old.

After the hearing, Hatch’s attorney, Richard Elliott, of Boothbay Harbor, questioned the credibility of his client’s alleged victims. Assistant Attorney General John Risler responded that the state has evidence to support the charges that have been filed.

During the hearing Tuesday, Aug. 23, Stokes agreed to a defense request to allow Hatch to be in the presence of his sister’s two children during a family gathering Saturday, Aug. 27, where Hatch’s son will be returning home from a tour in the military. Risler initially opposed amending the conditions of Hatch’s bail, but agreed to let him go to the Saturday event provided other adults supervise the children at all times.

Elliott said during the hearing that the defense will challenge the three unlawful sexual contact charges against Hatch, arguing that they are beyond the statute of limitations.

Hatch was arrested in June and initially charged with two counts of sexual abuse involving one girl. He was immediately placed on paid administrative leave.

Brackett said Hatch will remain on unpaid leave until an internal department investigation is completed after the Maine attorney general’s criminal investigation.

Hatch was indicted on 11 counts of sexual abuse of a minor, three counts of unlawful sexual contact, and eight counts of aggravated furnishing of marijuana. The drug counts allege that he gave marijuana to two of his alleged victims.

The earliest of Hatch’s alleged assaults was in September 1999. It allegedly involved a girl who was less than 14 years old at the time. The alleged offenses against another girl, who was 14 or 15 years old, occurred in 2001 and 2002, according to the indictments.

The assaults that resulted in Hatch’s arrest in June began in 2004 when the victim was 6 years old, according to the prosecutor. The indictments allege that Hatch assaulted the same girl and gave her marijuana in 2013 and 2014, when she was a teenager.

In an affidavit filed in June in the Lincoln County courthouse, Detective Peter Lizanecz. of the Maine Attorney General’s Office, wrote that the teenager told Augusta police in May that when she was 14, Hatch offered her marijuana in exchange for sex in the back seat of his cruiser.

She also alleged that Hatch gave her cigarettes, alcohol, money, and more marijuana during other incidents of abuse in the cruiser during the next two to three years.

Hatch is next scheduled to appear in the Knox County court on Oct. 27.