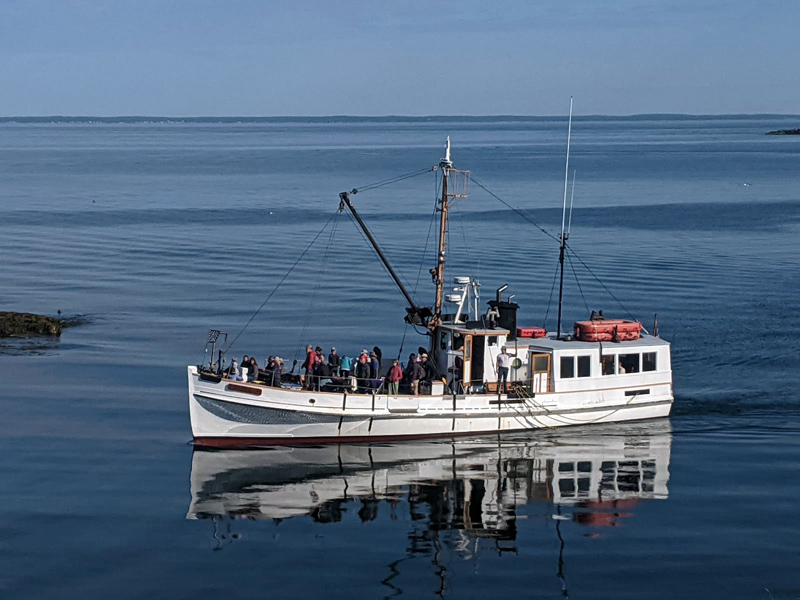 The world’s second-largest retailer has chosen a Maine island community to illustrate delivery off the beaten path.

Amazon this month released a mini-documentary about Monhegan Island on its website and YouTube channel. The producers filmed at Monhegan Island over the summer and begin their story at Port Clyde with packages loading onto the WWII-era Laura B, run by Monhegan Boat Line, on their way to the island 10 miles off the coast of Maine.

A voiceover explains “there are no paved roads and no car ferries travel to the rocky island. About 70 people live here year-round, and most of them get around the one-square-mile island on foot or by golf cart.”

Discussing the role the ferry service fulfills for the islanders, Monhegan Boat Line owner Andy Barstow quotes his father, who always said, “We deliver everything but babies.” The Monhegan ferry service has been run by the Barstow family for 45 years.

From there, locals share their lifestyle takes a bit of hardiness, which is eased by the fact that Amazon somehow delivers packages not just to the loading dock but to their doorstep, thanks to the ferry service they have come to count on, as well as the on-island delivery service offered by Angela Iannacelli.

Iannacelli, who has been delivering packages on the island for eight years, said “the Laura B is part of a lifeline for us” and helps make it possible to live and work on the island.

At the end of the video, Amazon announces that it donated $25,000 to the Monhegan Island Sustainability Community Association, which provides affordable housing so people can live and work on the island year-round.

Monhegan Boat Line has provided year-round ferry and mail service to Monhegan Island for nearly 100 years. During the summer, the Laura B and Elizabeth Ann offer three trips daily, as well as puffin/nature, lighthouse, and puffin/sunset cruises.

Built in 1943, the 65-foot Laura B is rigged as a heavy-duty work boat. Originally designated a U.S. Army T-57, she spent World War II in the Pacific, where she served as a patrol boat and carried troops and supplies. She came under fire during those days, and carried two 50-caliber machine guns on deck.

This rugged vessel was brought to Maine in 1946, and spent the next few years transporting lobsters from Vinalhaven to Boston and New York City. For the past half century, the beloved Laura B has been ferrying passengers, freight, and mail between Port Clyde and Monhegan Island.

A prominent marine surveyor has described her as the best-maintained wooden vessel on the Eastern Seaboard.