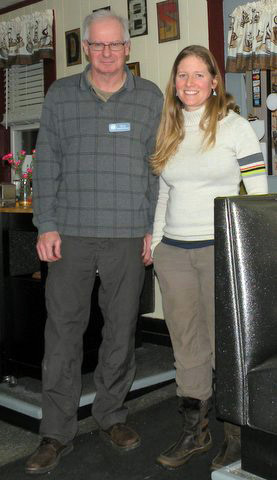 Claire Enterline, chair of the Bristol Mills Dam Advisory Committee, spoke to the Bristol Area Lions Club at their Feb. 5 meeting. Enterline holds a bachelor’s degree in environmental science from Boston University and a master’s degree in zoology focusing on fish behavior from the University of New Hampshire.

Enterline was employed as a diadromous fish (migratory between salt and fresh waters) biologist with the Maine Department of Marine Resources from 2007 to 2015, and was part of the staff that made assessments of the fishway in the Bristol Mills dam in 2012 to 2015.

As a Bristol Mills resident, Enterline did volunteer fish counts as well as enjoyed canoeing on the Pemaquid River up to the northern most point of Pemaquid Pond and back. She is very well aware of the unique habitat upstream from Ellingwood Park.

The Bristol Mills Dam Advisory Committee was formed in December 2016, at the request of the Bristol selectmen, to oversee the process of a feasibility study by Wright-Pierce Engineering to present various options for the future of the dam and fish passage at the site and important functions of the dam: maintaining water levels, and providing a firefighting water supply and swimming area.

After the completion of the first draft of the study, twenty members of the Bristol Fire and Rescue, as concerned citizens, urged leaders in a signed statement to maintain the current location of the Bristol Mills Dam, which was submitted to the selectmen on Nov. 13, by the Town Administrator.

At a public hearing on Tuesday, Jan. 30, residents voiced support for the repair of the Bristol Mills Dam and fish ladders as well as the ecosystem of the Pemaquid River. At the close of the informative meeting, Selectman Paul Yates took a non-binding straw poll on three options: repair, partial removal, or complete removal of the dam to see what the residents favored. The vote was 84 for repair, 24 for removal, and one for partial removal.

The next meeting of the Bristol Area Lions Club is the annual Speak Out on Monday, Mar. 5 at 6 p.m. in the fellowship hall of New Harbor Methodist Church, catered by Deb’s Bristol Diner. The meal will be veggie lasagna, salad, and garlic bread, followed by cookies and coffee. Student contestants and one family member or friend will be dinner guests sponsored by members of the club.

Members of the debate team from Lincoln Academy will be speaking on a topic of their choice for approximately five minutes using a minimum of notes. Points will be deducted for excessive reading. At the conclusion of each talk the contestant will be asked two questions to test their knowledge of the subject. A panel of three judges will score each contestant.

Cash prizes will be awarded to first, second, and third place. The winner will go on to the regional competition at Lincoln Academy, and that winner to the state competition at the Samoset Resort in Rockport at the end of April.

To make dinner reservations, please call Herb Watson at 677-6191. To learn more about the Bristol Area Lions Club, serving Bristol and South Bristol, call Walt Johansson at 677-2584, go to bristolarealionsclub.org, or like the club on Facebook.

(Editor’s note: An earlier version of this submitted item, online and on page 11 of the Feb. 22 print edition, misstated the results of the Jan. 30 straw poll.)