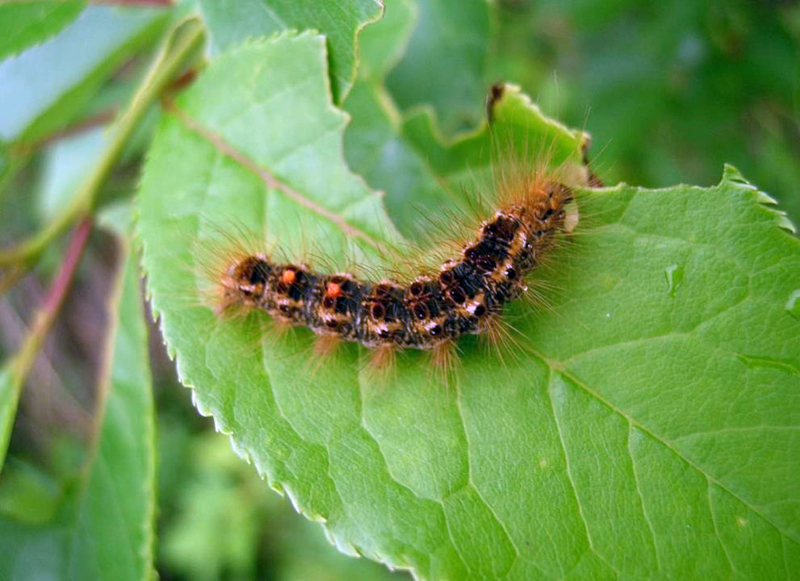 Browntail moth caterpillars can be identified by the two distinctive orange dots at the tail end and white tufts along the sides.

Browntail moths are a growing concern for many in the local community due to their human and environmental impacts. As caterpillars, these insects have tiny toxic hairs that break off and can cause skin rashes similar to poison ivy as well as breathing trouble for some individuals.

Fruit trees, oaks, and other hardwoods are hosts to several stages of the moth’s life cycle, including the overwintering webs found on the ends of branches. The caterpillars defoliate these hardwood trees, impacting the health of the trees as well. Schmeelk presented on the history of the moth in Maine, its lifecycle, identification, management, and how to protect oneself and one’s trees from these potentially harmful insects.

While it may seem that the browntail moth is a new problem, Schmeelk explained that in fact the moth was introduced to Maine over 100 years ago from Europe and since then has had various periods of population growth and collapse, but has always maintained a presence in the state.

In fact, in the early 1900s, towns paid bounties for winter webs, tens of thousands of which were clipped, many by local children. There was a concerted and multifaceted effort during that time to eradicate the invasive insect but it was ultimately unsuccessful.

Since 2015, the forest service has noted an increase in the presence of browntail moths throughout the state, particularly along the coast, but also moving westward. Schmeelk cautioned that moths are often transported unintentionally on people’s cars and this is extending their range to western parts of the state as well.

April through early July are the months with the highest risk of exposure to the caterpillars’ toxic hairs. During this time period, it is recommended that people, especially those with sensitivity, avoid heavily infected areas. There are precautions that individuals can take to avoid or mitigate health concerns, including dressing appropriately, washing exposed skin, and even using poison oak wipes before venturing out.

Winter web-clipping is likely the most effective way to control and manage these insects within a limited range, such as in backyards. Chemical treatments are also available, and options can be discussed with a licensed arborist. A list of licensed arborists who deal with browntail moths can be found on the forest service website.

Following the presentation, many in the audience shared questions, experiences, and concerns about health and tree damage that the moths are causing locally. Schmeelk suggested that citizens can work with their towns develop plans for addressing these concerns within the community.

For those who were unable to attend the lecture, the full presentation is available courtesy of BRTV on the Boothbay Region Land Trust website, at bbrlt.org. To see a list of upcoming events, including public lectures, go to the website and click on the “Events” tab.