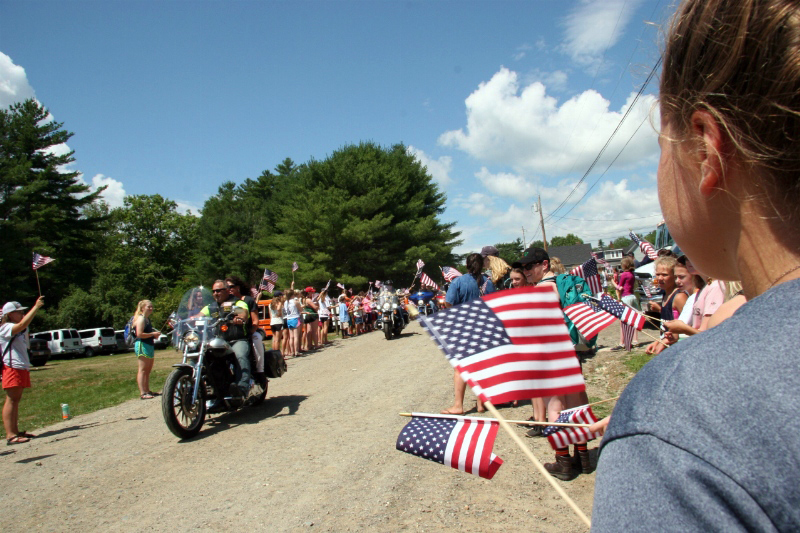 The Combat Veterans Motorcycle Association announces the seventh annual benefit rally Burgers, Bikes & Rods to support Kieve-Wavus Veterans Camp on Saturday, July 29. The ride will begin at L-A Harley-Davidson in Lewiston and will run through Sabattus and Gardiner on Route 126. It will last approximately 1 1/2 hours before ending at Wavus Camps on Damariscotta Lake in Jefferson just before noon.

The Combat Veterans Motorcycle Association is a group of veterans whose mission is to support veterans or their families. Members are veterans of all branches of the military who have deployed in wars ranging from Vietnam, the Gulf War, Iraq, and Afghanistan. The Combat Veterans Motorcycle Association is not a motorcycle club but rather a tax-exempt nonprofit 501(c)(19) that raises money for a number of veteran-related causes.

Over the past nine years, the Kieve-Wavus Veterans Camp has completed numerous, incredible week-long and weekend programs for veterans from the Iraq and Afghanistan wars, Vietnam, and even a special week for female veterans only. These free veterans camp programs gave veterans a chance to relax, reflect, reconnect, and have fun with their families on Damariscotta Lake and Camp Kieve’s Nobleboro campus, and the Wavus campus in Jefferson as well.

During these weeks, Kieve-Wavus’ Leadership School staff and volunteers brought veteran guests a broad range of physical, creative, and healing activities such as rock climbing, snowshoeing, pottery and jewelry making, yoga, and massage. Some activities, such as PTSD-focused acupuncture, were offered specifically with veterans in mind. Personal services such as massage, foot reflexology, haircuts, and manicures proved to be very therapeutic as well.

L-A Harley-Davidson owner John Story said, “I feel very strongly about all the servicemen and (service)women that serve our country. They risk it all and are too soon forgotten and we should all do whatever we can to honor their service to our nation.”

In addition to lakeside relaxing after the ride, there will also be a cookout with hamburgers and hot dogs at Wavus Camps on Damariscotta Lake. Kieve-Wavus Education’s executive director said, “We are very honored to provide our week-long programs for veterans and their families to relax and reconnect with their families and are also very excited to host these veterans at our camp after the ride.”

Ride coordinator Steve Rendall said the ride will be open to anyone with a 500cc motorcycle or above.  Combat Veterans Motorcycle Association membership is comprised of full members — those with verified combat service — and supporter members — those who have noncombat military service and have a sincere dedication to helping veterans. Auxiliary members are those who are spouses of full or support members. Members are from all 50 states, Korea, and Germany, with many members still in the U.S. armed forces and many serving in combat areas now.

The riders will be welcomed by hundreds of flag-waving campers from both Kieve and Wavus at the Wavus campus on Route 213 in Jefferson at approximately 11:30 a.m. to noon.