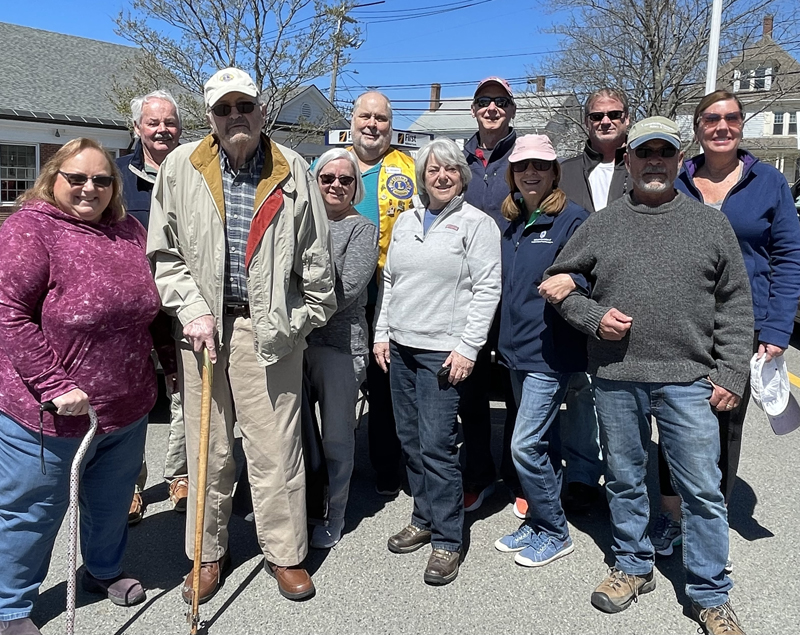 On Sunday afternoon April 24, 15 Lions and friends gathered at the parking lot of the Damariscotta branch of the First National Bank to take part in the 16th annual Walter Gallant Memorial Walk for Diabetes.

After a two-year hiatus, the Damariscotta-Newcastle Lions Club was pleased to be able to hold the 2.5 mile walk through the Twin Villages. The goal of the walk was to raise awareness of, and funds for, diabetes-related programs and services in the greater Damariscotta area. This year, the club raised $,1500 which will to be donated to Lincoln Health- Miles Campus for Diabetes education and out-reach.

The walk honors the memory of Lion Walter Gallant, a past district governor (1966-1967) who was a long-time Damariscotta resident and a diabetic himself. He dedicated himself to serving those in need through his work in his Lions Club, as a community leader and as a volunteer fireman.

Diabetes affects a number of community members, and it is reported that 8.3% of the adult population in Maine have been diagnosed with diabetes. Additionally, it is estimated that just over 3% of Maine adults have it, but are unaware. Medical costs and loss of productivity due to diabetes has been estimated to be over $300 billion.

Diabetes is the nation’s seventh-leading cause of death and accounts for nearly 88,000 deaths annually. Those with diabetes are twice as likely to have heart disease or a stroke as those without it. It is also a leading cause of kidney failure, non-traumatic lower-limb amputation, and blindness among adults.

The Lions of the Damariscotta-Newcastle Lions Club would like to thank individual donors, as well as their sponsors Bar Harbor Bank, The Penalty Box, Supplies Unlimited, who donated printing, and Main Street Grocery, for their donation of cases of water to keep the walkers hydrated.