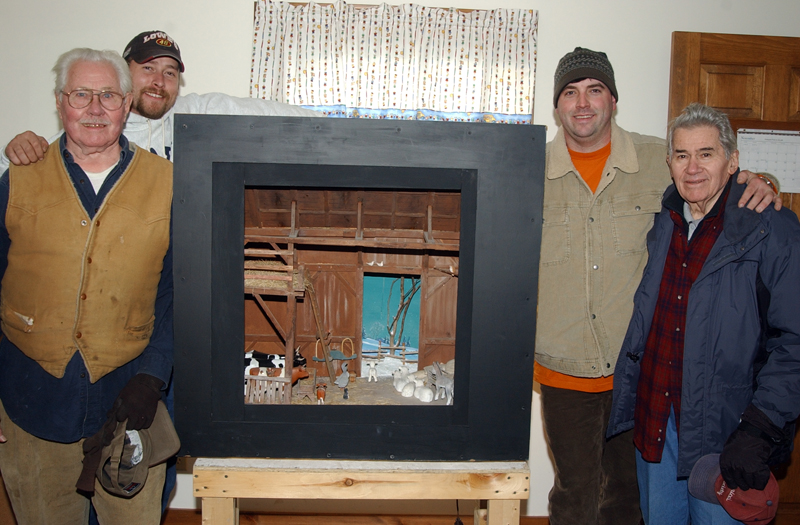 McClure “Mac,” Darryl, Justin, and Richard “Dick” Day with Jake Day’s barn diorama, which was installed in the Day ancestral home in Damariscotta. (Paula Roberts photo, LCN file)The Maurice “Jake” Day Christmas dioramas are once again on display this holiday season at the Milling Around in Newcastle. They will be lit from sunset until 9 p.m.

Viewing Jake Day’s dioramas has been a holiday tradition for multiple generations. Day was born in Damariscotta on July 2, 1892. He loved his native state of Maine. From the coast to the rugged mountains of northern Maine, Day drew the inspiration for his many artistic talents from the solace and beauty of nature. An avid photographer, Day tramped into the north woods and photographed every aspect of nature. The beauty of Maine resonates in his painting of the coastline and the woods. It is the animals of the woods and sky that inspired Day’s whimsical animated creatures that he is so famous for.

Day was recognized as a leader in photography, which often became inspirations for his paintings. He showed slideshows of his photographs and artwork throughout Maine and beyond from the 1950s to the 1970s. His theme was simple – slow down, look, appreciate and protect Maine’s precious natural resources.

While Day painted lovely seascapes and scenic mountains and streams, he is best known for his imaginative paintings, including animated animals with human characteristics often posed in comical situations. A hollow wooden stump was quite often the centering piece of the painting, with forest animals busy at work on a printing press, drilling a tooth, or working on a car, depending on who the customer was. 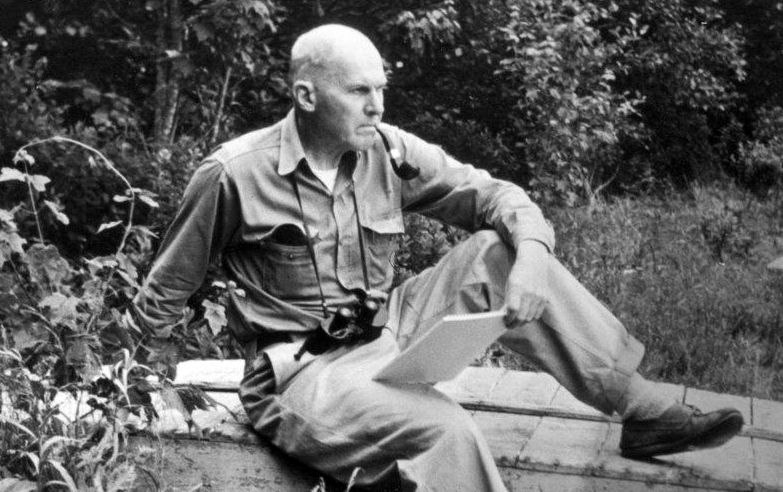 Day graduated from Lincoln Academy in 1910, where his artistic talent began to blossom. He attended Massachusetts Normal Art School (Massachusetts College of Art) for one year, then transferred to the School of the Museum of Fine Arts in Boston, graduating in 1914. He received a Cummings Traveling Scholarship, but was unable to use it due to WWI.

Day served in Battery A First Massachusetts Field Artillery at Fort Bliss, El Paso, Texas on the Mexican border, and later in the Naval Camouflage Department of the Emergency Fleet corps in New Orleans.

After the war he became a well known illustrator for children’s book authors, including Henry Beston. He designed covers and illustrations for several magazines, including Ford Times, Outdoor Life, House Beautiful, Home and Garden, and Atlantic Monthly. Many of his cover designs were recognized with awards.

He did commercial work for National Audubon Society and National Wildlife. Later, he drew editorial cartoons for the Maine Sunday Telegram. His cartoons poked fun of topics ranging from politics to preserving Maine’s lifestyle and protecting the environment.

Day moved his family, including wife Bea and sons McClure (Mac) and Richard (Dick) to California in 1935. While living in California with his young family, Day exhibited in Laguna Beach in a show of imaginative paintings of humanized animals. His paintings drew the attention of Harman-Ising Studio. That job led to employment at MGM, Walt Disney Studios, and Hanna-Barbera. 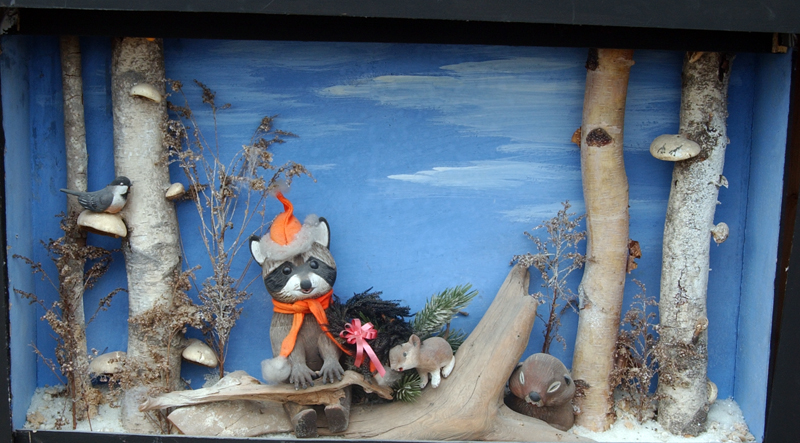 Jake Day Christmas dioramas are once again on display at Milling Around in Newcastle. (Paula Roberts photo, LCN file)

When Disney became interested in the story of Bambi, it was Day who suggested they use a whitetail deer from Maine. He was sent to the Katahdin area to photograph the flora and fauna, first in black-and-white and then in color. He also made arrangements with the commissioner of Inland Fisheries and Game to have two fawns, as well as a variety of small animals, shipped to California to use as models. Day worked for Disney and MGM from 1938 to 1944.

The production of “Bambi” took almost six years, not only because drawing a full-length cartoon movie is labor intensive, but also because of a strike, WWII, and a threatened boycott by the pro-hunting movement.

Day became homesick for his native state, so returned to his Damariscotta ancestral home built by his great-grandfather in the 1790s. That historic house is now owned by his grandson Daniel and wife Sandy Day.

Day carved animal and figurines out of balsa wood for his two sons for Christmas. The boys so enjoyed their new toys, and because there were few gift shops in Maine featuring Maine crafts, the Day family opened “The Whittle Shop” which featured carved birds, animals and miniature wooden scenes of the Maine coast artistically mounted on driftwood. The Whittle Shop was located between the Damariscotta Baptist Church and the Damariscotta Information Bureau, where Main Street is now located. 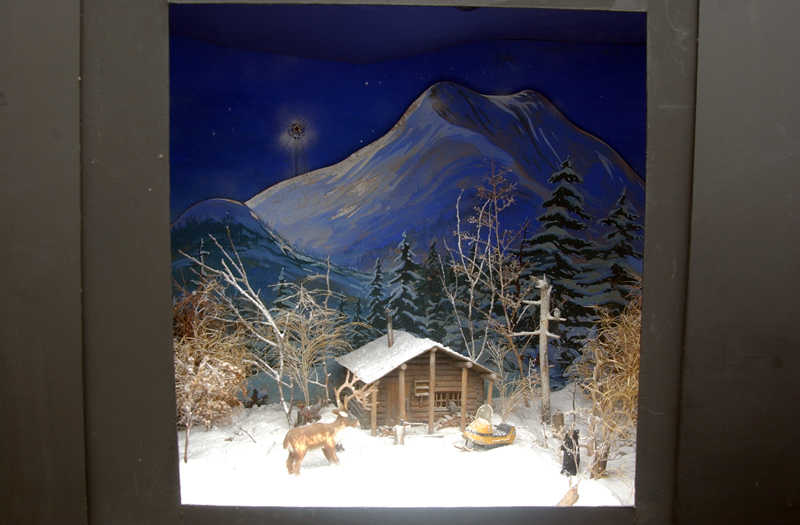 Day was a pioneer in the use of driftwood. His carved chickadees perched on driftwood quickly became his signature carving.

Day used his wood carvings to produce a gift to everyone in the community with his window dioramas. Day made the dioramas to amuse his children at Christmas, He put them on display in the windows of the family’s ancestral home on Bristol Road in Damariscotta for all to enjoy.

The dioramas feature whimsical forest animals singing carols, a fantasy castle, Santa’s boots coming down the chimney, a moving toy Christmas train, a cabin in the woods, and a manger scene with the star of Bethlehem. The animals and characters in the scenes are intricately carved out of wood.

Each year, for over 60 years, hundreds of people have traveled from near and far to catch a peak at his magical Christmas creations. They have become a big part of Christmas tradition from many generations, from Lincoln County and beyond. 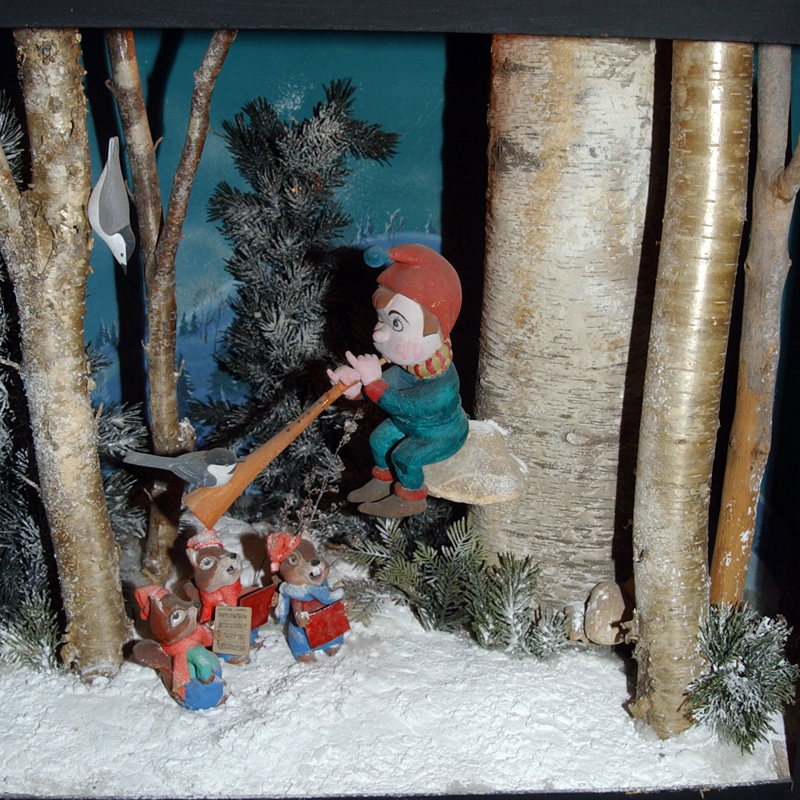 After Day’s death in 1983, the dioramas were given to the Farnsworth Museum in Rockland, where they were displayed at Christmas for many years. They fell into disrepair and were no longer put on display. In 1998, the Jake Day Diorama Preservation Society was formed and the window dioramas were returned to Damariscotta for the Christmas season.

They were repaired by members of the Day family, including sons Mac and Dick, and by Chris Roberts. They were put on display in merchant windows in downtown Damariscotta for a couple of years, before being moved to the Day family homestead. For the past couple of years they have been displayed at Milling Around in Newcastle.

Jake Day’s grandson Dan and wife Sandy, and great-grandsons Justin, Darryl and Matt, joined by members of the Roberts family, install the dioramas for display every December.