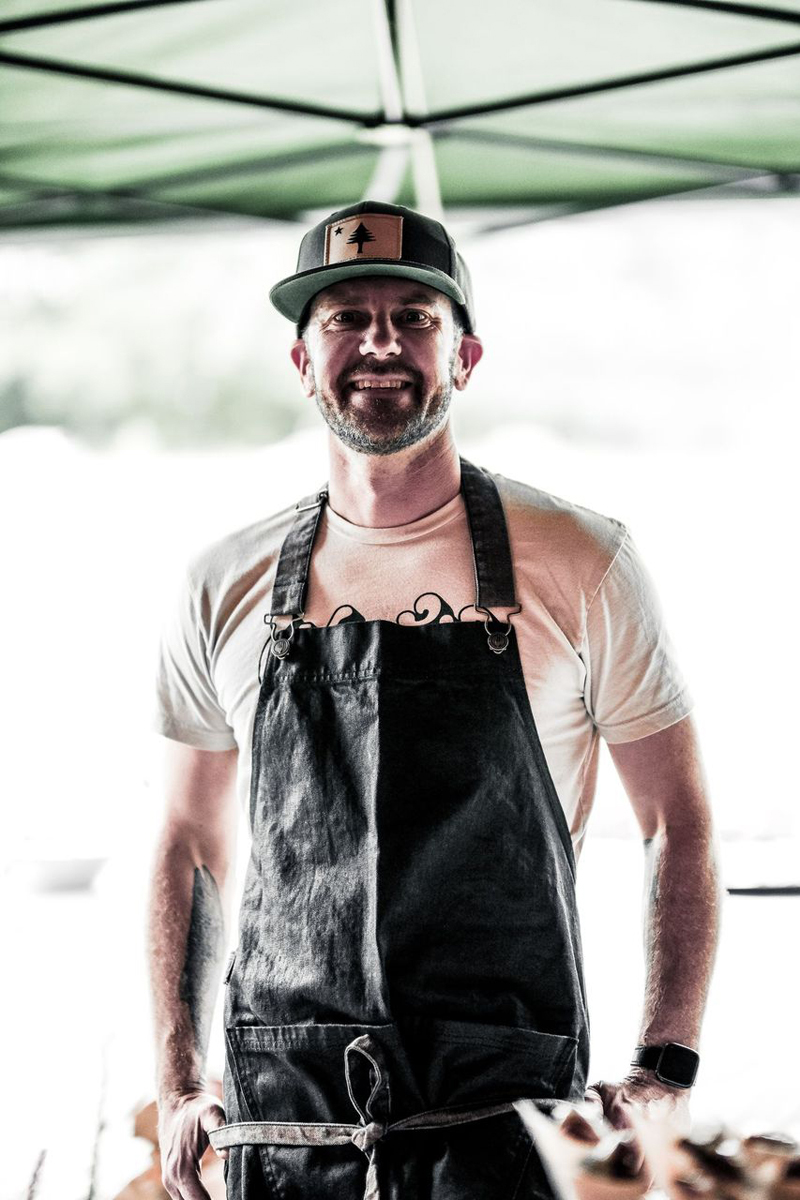 Tops’l Farm Chef Ken Burkett has always “kinda cooked.” He’s worked in kitchens most of his life, starting out as a dishwasher, then prep cook, then line cook at a series of “turn ‘n burn burger joints.”

But as chef at Tops’l Farm, Burkett likes to keep the food clean, light, and fresh in both ingredients and philosophy. He calls his menus unassuming – just a basic description of what’s to come.

“But there’s so much more behind it,” he said.

A one-year stay in North Carolina was a game changer for him. A sous chef at a restaurant he worked at in Carrboro insisted he try a braised tuna dish, but Burkett was not interested; “I grew up a very picky eater,” he said.

The tuna was a revelation. It showed Burkett the power and potential of freshly made local ingredients. He began looking at his career through a more professional lens, and when he returned home to North Conway, N.H., he was no longer satisfied with the restaurant work of his past.

Burkett’s professional career as a chef began in Portland where, inspired by his older brother, also a chef, he joined the culinary arts program at Southern Maine Community College.

A five-year tenure culminating in his position as executive sous chef at nationally acclaimed restaurant Grace taught him what he needed to know, gave him the ability to cook the way he wanted, and set him up to succeed at Tops’l Farm.

Burkett’s approach to food reflects a combination of all those culinary influences. He loves home cooking as much as he loves fine dining.

The four season dinners at Waldoboro’s Tops’l Farm reflect a critical aspect of the farm’s mission as described on its website: “We believe in dressing for the temps, lighting huge fires, and gathering outside in ALL of Maine’s weather.”

Burkett is currently at work on the menu for this winter’s raclette dinner, an experience that combines the Swiss tradition of a melted cheese meal with a cocktail hour, fresh oysters, and a variety of seasonal, locally sourced accompaniments all served at the 83-acre property on the banks of the Medomak River.

Burkett plans to source the oysters from Community Shellfish in Bremen. He is tapping Morse’s Sauerkraut in Waldoboro for the three kinds of charcuterie he plans to feature, “one a prosciutto for sure,” he said. Pickles and jams are being prepared “and dilly beans are a must.”

Burkett is fermenting garlic in some of the 60 pounds of unfiltered honey he sourced locally to create a compound butter and he is considering a play on bananas and cream for the dessert course.

Tops’l starts the four-season series in late December/early January with the raclette meals.

Spring brings in a sugar shack menu, built from the bounty of sap from Maine maples. Farm owner and visionary Sarah Pike calls it “our celebration of mud season,” when people begin to emerge from their homes.

Summer’s meal, an ode to fishing culture and the bounty of river and ocean, is hosted on the banks of the Medomak.

Fall’s challenge is the wild game menu that Burkett pulled off so successfully earlier this year. Pike said she sees it as an opportunity to bring a new audience to Maine’s tradition of hunting with dishes that can feature moose, bear, wild turkey and wild hare sourced from local hunters with help from the Maine Department of Inland Fisheries and Wildlife.

According to Burkett, a friend and fellow chef who had prepared a wild game dinner at Tops’l connected him to Pike several years ago. He stayed in contact and wound up as a guest chef, cooking one of the wild game dinners himself.

Burkett did most of the prep out of his Portland apartment, traveling to Waldoboro to complete the meal. The experience of cooking the dinner on an open fire at the farm’s riverside yurt was transformational. Burkett saw Tops’l as an opportunity to be in on building something different and exciting.

“Everything they were doing was too great not to have food done specifically all in house,” he said. Inspired by Pike’s vision he joined the team at the farm as its full-time chef in the spring of 2020.

Burkett calls a meal at Tops’l an immersive experience, like a large dinner party with guests mingling at the fire pits in winter, children running in the fields in the summer. The pandemic interrupted the flow of the seasonal dinners, but Pike and Burkett were determined to bring them back.

Burkett said this year’s wild game menu was devised on “a wing and a hope and a prayer” with minimal staff and no dependable source for the proteins. Nevertheless tickets sold out in four hours – before he even had time to decide on the menu or know what game might be available. But it all came together in the end. And that meal set the stage for the next offering.

The upcoming raclette dinners are one way Tops’l Farm keeps a year-round presence, and a year-round staff. But it has the potential to be more. Burkett looks forward to expanding on the event, finding ways to leverage local food products to build his menu, supporting the local economy.

Burkett’s menus are inspired by the offerings at local markets and by bouncing ideas off everyone who passes through the farm’s kitchen. The kitchen at Tops’l is a central hub where staff often congregates and food is a popular topic.

For the last river meal Burkett said he was inspired by a staff member to devise a “Medomak River wild weed salad” made with fresh fruit, clover and flowers foraged from within five miles of the farm. The salad showcased Burkett’s ability to work with available ingredients, to keep the composition of dishes simple and technique driven.

A year-round presence allows Tops’l to build on its seasonal success as a wedding venue, camping site, and event space. Pike and Burkett want to bring more of the Tops’l experience to the local community with innovations like winter camping, open barn dinners, movie nights, and community farming. They want to continue to work with local providers and businesses like Odd Alewives, Morse’s Sauerkraut, and Community Shellfish to build Waldoboro into a community that has the ability to draw visitors off the beaten path of the Route One corridor to see all that the area has to offer.

“Our favorite thing is to surprise and delight,” Pike said. “It’s our joy to welcome people here.”

The winter raclette series kicks off on Dec. 18 and will be offered for both lunch and dinner seatings most Saturdays through February, with the possibility of adding Friday night seatings based on demand.

The raclette dinners will start in the open air, weather permitting, with fresh oysters and beverages, and perhaps a round of hammerschlagen. Hammerschlagen is a traditional German competitive game in which players attempt to drive a nail into a tree stump in the fewest possible strokes.

Eventually diners will move inside the spacious barn to enjoy a meal based on the classic Swiss raclette model: Slices of cheese melted and draped over potatoes, fresh baguettes, fresh vegetables and an array of charcuterie.  The barn seats 150, but Pike said seatings are limited to 50.

For more information, to reserve a table, or to sign up for the Tops’l Farm newsletter for advanced notice of events, including the four seasons dinner series, go to  topslfarm.com/winter-raclette.