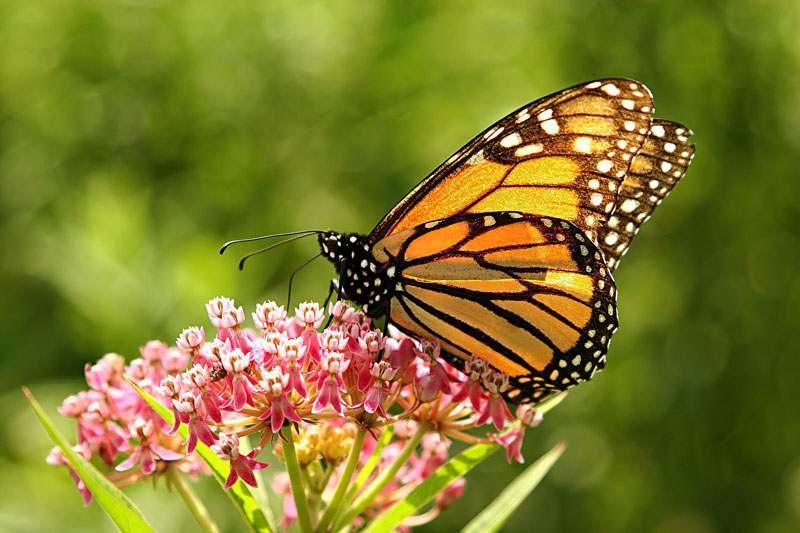 One of the most easily recognized butterflies in Maine, the Monarch Butterfly has been added to the International Union for the Conservation of Natures endangered species list. (Photo courtesy Pixaby)

The eastern monarch butterfly is certainly one of the most easily recognized butterflies in Maine. For many of us, this remarkable creature’s story of its annual migration to Mexico each fall is, in itself, phenomenal. For pretty much all of us, watching a monarch flutter among the summer flowers is a beautiful sight.

Unfortunately, this year, the International Union for the Conservation of Nature placed the monarch on its endangered list. Here are a few suggestions for how we can help the species fight for its survival.

Each fall all the eastern monarchs migrate to the Oyamel Fir Forests in the mountains of central Mexico. Sensing the shortening day length and cooler temperatures the monarchs begin their migration out of Maine in September, reaching the peak by the middle of the month. They return in June, seeking milkweed to lay their eggs on.

Common Milkweed, the only thing that monarchs eat, contains a nasty toxin called cardenolide that can make any other creature vomit and, should they ingest enough, cause their hearts to beat out of control. Monarchs have evolved to resist the toxin which allows the butterflies to repel predators by storing the toxins in their bodies.

Birds tend to find out the hard way which insects are unpalatable, by trial and error. Once a bird learns an insect that is bright yellow, orange, or red is likely to have a terrible taste they will probably steer clear of all of them.

The monarch butterfly’s decline has been caused by many factors, including deforestation of overwintering grounds, toxic weedkilling practices causing milkweed habitat loss, and mortality during the autumn migration. Climate change, which can cause unusual temperature swings is also a major contributor to their decline.

The introduction of GMO corn and soybeans with the overuse of Glyphosates (commonly found in products like Roundup) to control weeds in large industry farming is also a contributor to the decline. Urban sprawl, which has claimed natural habitat areas for business and residential purposes, is causing massive decimation along the migratory routes.

What can we homeowners in Maine do for the monarch? If you own a field that you mow every year that has Common Milkweed and other wildflowers in it that are still blooming, try not to mow it till end of September. Plant milkweed by collecting some pods from an area where they are abundant. Just remember you will need to have a large quantity of seed.

In nature less than 5% of the seeds that are dispersed germinate and grow to adulthood. Growing milkweed from seed is an inexpensive way to produce a lot of plants to support more monarchs in your landscape.

Plant some seeds outside in a large pot and let them grow all summer together as juveniles. In September they can be separated into smaller clumps and repotted or shared with others. Alternatively, seeds can be started indoors in plug trays and transplanted to the garden in mid to late spring.

First-year plants will not bloom until the second summer, but the young foliage will still provide food and egg-laying sites for the monarchs. You can also broadcast milkweed seed in a prepared bed or in an existing meadow. Butterfly Milkweed and Swamp Milkweed are also widely available in the nursery trade.

Remember: monarchs are nectar feeders so creating a Butterfly Garden for the monarch and other butterfly species involves planning your garden to attract, retain, and encourage butterfly populations to visit. You should select a variety of nectar-producing plants (butterfly food plants) with the goal of providing flowers in bloom throughout the season. This will encourage a continuous succession of new visitors to your butterfly garden.

For the enthusiasts who wish to help send the butterflies off to Mexico fully nourished right now, there are plant varieties available at nurseries that will help: Salvia, Lantana, Sedum, and Aster bloom nicely into autumn. Each small effort can combine to make a big difference.

(David Brown owns Safeyard Organics, an organic tick and mosquito spray service that works to protect pollinators. He may be reached at 333-0681.)