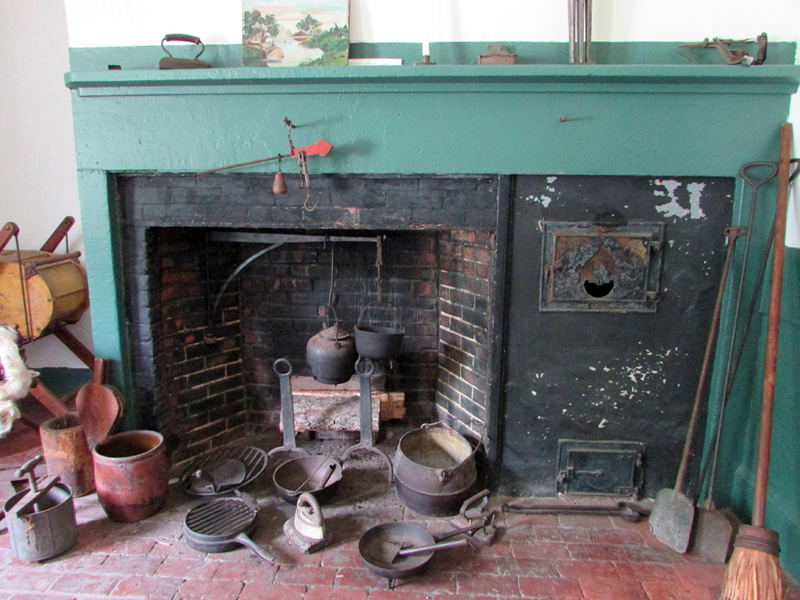 The cooking fireplace in the kitchen of the 1838 jailers house at the 1811 Old Jail and Museum in Wiscasset. (Photo courtesy Lincoln County Historical Association)

The Lincoln County Historical Association works with local schools to advance the historical heritage of Lincoln County and Maine. In this effort, the organization’s education director has developed two booklets that provide educators and their students with an overview of historical data in an interdisciplinary manner: “Settlement during the War Years — 17th & 18th Century Challenges in MidCoast Maine,” and “The 1800s — A Century of Highs and Lows.”

One topic that is common to both booklets is food, a subject that is inescapable in a discussion of settlement and change. Research in this area uncovers many interesting facts. A significant addition to the culinary options of Americans, sadly not invented in Maine, but down the road in Boston, was the jelly bean. Invented by William Schrafft in 1861, the new candy was promoted as the perfect gift to send to Union soldiers fighting in the Civil War. If one wishes to celebrate this wonderful event in a special way, April 22 is National Jelly Bean Day.

Closer to home, the 1800s saw a number of agricultural-related advancements. The Portland food processor, Winslow and Co., patented a method of canning corn in 1862 that enabled Maine to support the Union troops during the Civil War. With this valuable process in hand, Winslow won the contract to supply canned corn to the Union army at the same time that it marketed the product to hundreds of households.

The appearance of the refrigerated railroad car in 1867 revolutionized the transportation of food. This invention enabled Maine dairy farmers to open up new markets because they could ship their butter, cheese and milk long distances without fear of spoilage.

The Sandy River Cheese Co., established in 1871, was the first cheese factory in Maine. The Maine Dairymen’s Association was formed in 1874, signaling a rise in specialized farming. Cheese making was no longer an individual, small production undertaking, and this had an impact for every family. Macaroni and cheese, served as a gourmet dish by President Thomas Jefferson at the White House in 1802, was now available to all.

After the Civil War Aroostook County took the lead in the production of Maine potato, a food that satisfied the market for food, starch, and seed.

This brief look at 19th-century advances is further detailed in “The 1800s – A Century of Highs and Lows.” Both of the booklets are available free to educators (including home schooling families) at no charge. To access the files, email Louise Miller at lchamaine1954@gmail.com.

Lincoln County Historical Association is a nonprofit organization that provides stewardship for the 1754 Chapman-Hall House in Damariscotta, the 1811 Old Jail and Museum in Wiscasset, and the 1761 Pownalborough Court House in Dresden. For more information, go to lincolncountyhistory.org or find the association on Facebook.