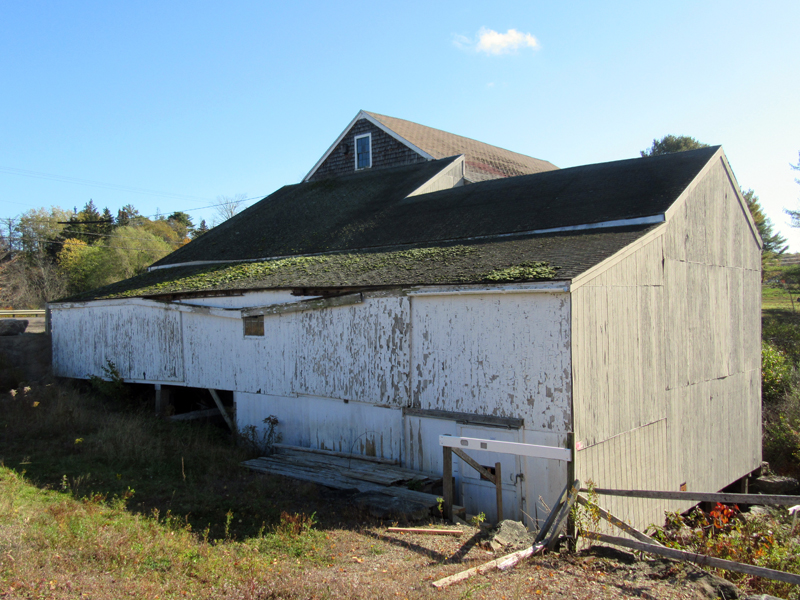 The one-story shed, a later addition to the mill at Pemaquid Falls, will be kept under the restoration plan accepted by the Old Bristol Historical Society, at least until future decisions are made about how much space is needed for exhibits in the planned museum. The rest of the exterior will be restored to the way it looked in old photos circa 1910.

Recommendations for preservation of the mill at Pemaquid Falls and for use of the building as a museum have been drafted by a seven-member subcommittee of volunteers with varied professional expertise and accepted by the board of the Old Bristol Historical Society at its meeting last week.

Old Bristol Historical Society Co-President Robert Ives stressed to the board that the projected two-year to three-year timetable for the project, at a cost estimated at from $300,000 to $600,000 depending on the type of exhibits and equipment installed, will depend on fundraising progress. Initial work will concentrate on stabilization of the building and its foundation, and on exterior renovation.

The planning group included two architects, two building restoration experts, an employee of historical museums, a project management specialist, and a college professor. They met weekly in August and September to develop the plan, and made a 2-hour interim presentation to key Mill Committee members before making the final presentation to the society’s board.

The group was chaired by Mark Ziarnik, who will continue as project manager. Members were Nancy Evans, Fred Gumkowski, Alexandra Jansen, Roger Panek, George Parker, and Chuck Rand. All are members of the Mill Committee.

The historical society hopes to take over legal responsibility for the mill and the adjacent former Hammond Lumber retail store, now called the Bristol History Center, from Coastal Rivers Conservation Trust next month. In the interim, Mill Committee Chair Phil Averill reported to the Old Bristol Historical Society board that he has been meeting with potential contractors to develop scope-of-work documents. He is also seeking a volunteer to serve as clerk of the works.

The exterior of the mill will be restored to its 1910 appearance, the approximate date of the oldest photo of the mill the society has found. However, the plan proposes to keep the one-story shed addition at the north end of the mill, which does not appear in the earliest photo, at least until future decisions are made about how much interior space will be needed for museum displays.

“The mill has undergone numerous modifications over its life,” the plan document states. “All are part of the mill’s story, and thus have potential historic value.” The plan notes that to retain the later northern addition will require repair of its foundation.

The planning group’s report stresses the need to maintain coordination of various plan elements as the project proceeds, such as integrating design work for the mill and its exhibits with plans for the Bristol History Center, and with planning of educational programs.

The plan recommends that toilets compliant with the Americans with Disabilities Act be constructed in the Bristol History Center to accommodate mill visitors. Architect and Mill Committee member George Parker is preparing drawings, Averill told the board. The existing septic system, installed in 2005 to accommodate six employees (90 gallons per day of effluent), cannot be expanded because of soil limitations at the site, its designer, Ken Cotton, told the planning group.

The report also includes recommendations for later work to make the mill safe for visitors, to include ADA-compliant ramps, trip-proof flooring, compliance with Life Safety Code requirements, and new electrical service and lighting.

A parallel priority should be restoration of the system of belt-driven pulleys and gears, which powered the mill machinery, the report states. The presence of the surviving millworks and antique equipment is a major reason to preserve the mill. The report recommends the equipment be electrically powered, as it was after electricity reached Pemaquid Falls in the early 1930s. An antique electric motor used there is still in the basement.

Contributions to help restore the mill at Pemaquid Falls may be mailed to OBHS, P.O. Box 87, Bristol ME 04539 with “mill” written on the memo line of the check.