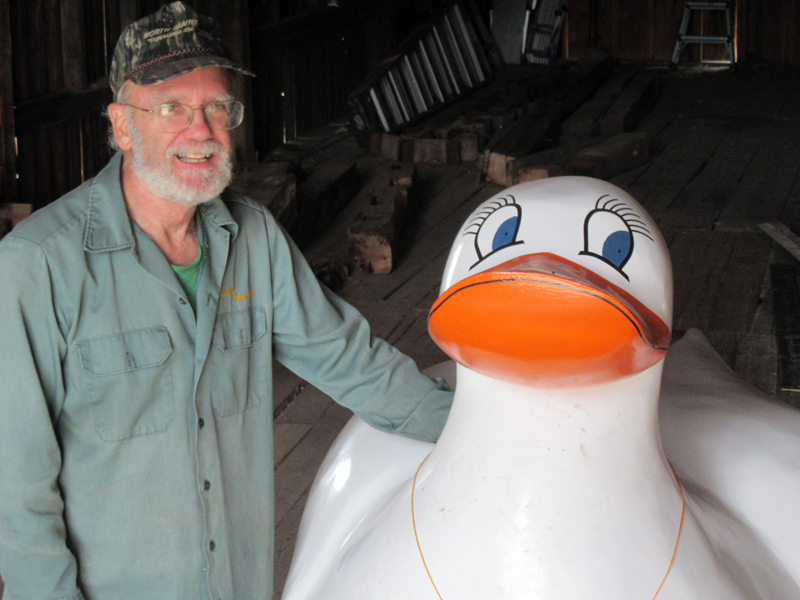 Pemaquacky, symbol of the Rubber Ducky Race, is welcomed to her new quarters by Phil Averill, race co-ordinator.

The Rubber Ducky Race will be revived by the Old Bristol Historical Society, which will hold the popular fund-raising event on Sunday, July 25, at noon on the Pemaquid River across Route 130 from the Society’s Pemaquid Falls campus.

The ducky race was run by the Pemaquid Watershed Association for 13 years before PWA merged with the Damariscotta River Association to form the Coastal Rivers Conservation Trust in 2019.

The public is invited to sponsor one or more numbered rubber duckies ($5 per ducky; $25 for a six-quack), with cash prizes awarded for the 10 fastest duckies and the last place finisher, the Pokey Ducky.

Ducky sponsorships can be purchased at the Ellingwood Park Information Center next to the public kayak launch in Bristol Mills, from 9 a.m. to 4 p.m. on Monday through Friday, Saturday from 10 a.m. to 1 p.m. and on Sunday from 9 a.m. to 2:30 p.m. at the Old Bristol Historical Society campus at 2089 Bristol Road in Pemaquid Falls.

Later in the month ducky sponsorships will also be sold on various dates outside of Main Street Grocery and Sherman’s Bookstore in Damariscotta and C.E. Reilly & Sons in New Harbor.

The competing duckies will race from above the small falls to the finish line above Route 130. Ducky dumpers will release all duckies at the same time by dumping them out of their storage barrels.

The ducky dumpers will follow the racing duckies in a boat to free any duckies caught up on the sides of the river. Two race officials will record the numbers of the winning 10 first finishers.

The prizes will be awarded on the spot to winning sponsors attending the race, and checks will be mailed to those not present. Prize amounts are $100 for first place, $75 for second, $50 third, and $25 for fourth through tenth places. The ducky dumper boat will determine which ducky finishes last. The sponsor of the Pokey Ducky will win $100.

A team of six ducky wranglers, both on shore and in kayaks, will collect the duckies using dip nets after they pass the finish line.

Bristol folk singer Jan Bacon will provide ducky-themed music and announcements from the finish line, as she did when PWA sponsored the race.

Bangor Savings Bank is the corporate sponsor for the event. Amanda Pendleton, customer service specialist at its New Harbor branch, will be chief judge for the race.

Margaret Brown, owner of The Art of Antiquing in Round Pond, has offered the public access to the property behind her warehouse across Route 130 from the Old Bristol Historical Society campus to view the race. Jeanne Rottner, a long-time member of the historical society, has given permission for the ducky dumpers to cross her land to reach the starting point of the race above the small falls.