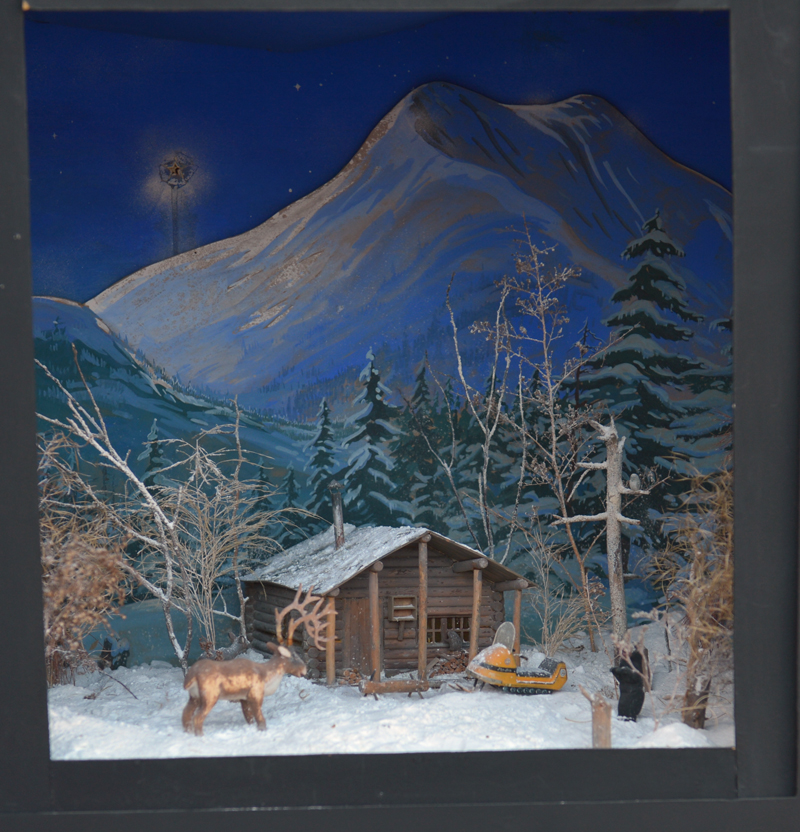 A cabin in the woods scene is one of Jake Day’s dioramas on display at Milling Around in Newcastle through Jan. 5.

Maurice “Jake” Day’s Christmas dioramas are on display at Milling Around, at 67 Main St. in Newcastle, through Jan. 5. They will be lit from sunset until 9 p.m.

Viewing the windows has become a holiday tradition for people of all ages for more than seven decades.

Day was born in Damariscotta on July 2, 1892. He loved his native state of Maine. From the coast to the rugged mountains of northern Maine, Day drew the inspiration for his many artistic talents from the solace and beauty of nature. An avid photographer, Day tramped into the north woods and photographed every aspect of nature. The beauty of Maine resonates in his painting of the coastline and the woods. It is the animals of the woods and sky that inspired Day’s whimsical animated creatures that he is so famous for.

Day also drew inspiration for his humanistic woods creatures from his experiences summering on a houseboat on Damariscotta Lake with his family.

Day was recognized as a leader in photography, which often became inspirations for his paintings. He showed slide shows of his photographs and artwork throughout Maine and beyond from the 1950s to the 1970s. His theme was simple: slow down, look, appreciate, and protect Maine’s precious natural resources.

There was no bah-humbug in the Day household, as Jake Day used his artistic talents to delight all the children and adults in the neighborhood with fairy-tale Christmas windows. For many years, Day created the whimsical dioramas and displayed them in the windows of his ancestral home on Bristol Road in Damariscotta. 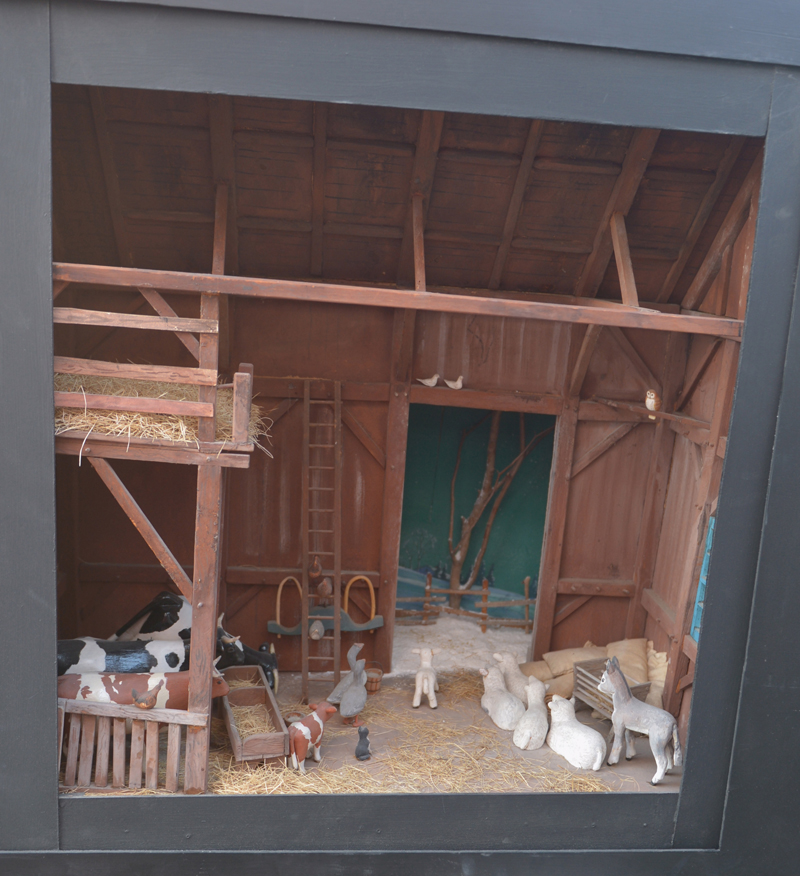 Maurice “Jake” Day’s barn-scene diorama is on display at Milling Around in Newcastle.

Day entered Damariscotta’s Christmas decoration contest in the mid-1940s with his first diorama of an old Eskimo village. That started a Christmas tradition in the Day household that has extended 70-plus years. It took Day 10-14 days to make and set up each diorama.

Day filled the ground floor windows of the Day homestead with his lit fairy-tale creations. He carved woodland creatures out of balsam wood and incorporated them into his Christmas windows, and quite often made new ones using parts of older ones. Each diorama is enclosed in a shadow box, some extending six feet into the interior room.

Steps were built outside, so even the smallest of children could witness the magic of the Christmas season in Day’s creation.

A barn scene, a train (problems with derailment), carolers, sliders, three bears, a manger scene, a log cabin, an enchanted castle — the dioramas were displayed for years at the Day homestead.

The barn diorama was inspired by the poem ‘The Barn,” written by Elizabeth Coatsworth.

After his death, the dioramas were given to the Farnsworth Art Museum in Rockland, who displayed them outside for several years. The dioramas were in a state of disrepair, when in 1998, they came back to the family and the newly established Jake Day Preservation Society. His sons, Mac and Dick, along with Chris Roberts, lovingly restored the dioramas. They were displayed in downtown businesses for a couple of years before moving back to their original locale at the Day house.

Jake Day prints are available for sale at Milling Around.