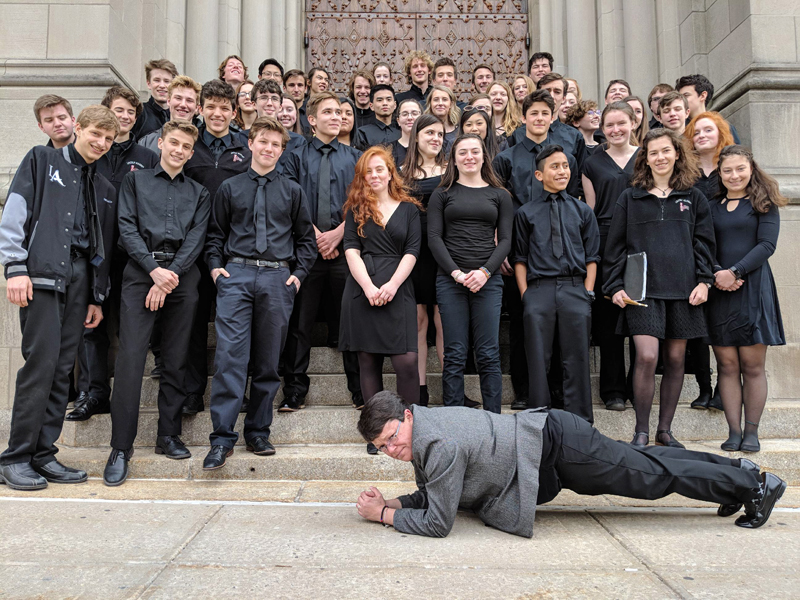 The Lincoln Academy Wind Ensemble on the steps of Riverside Church in New York City, with band director Liz Matta showing off her plank.

At the festival, the students played pieces they have been working on throughout the year for judges, a panel made up of music professors, directors, and composers from universities and orchestras around the U.S. After listening to their performances, the judges awarded Gold ratings — meaning they met the festival’s highest standard — to both groups. 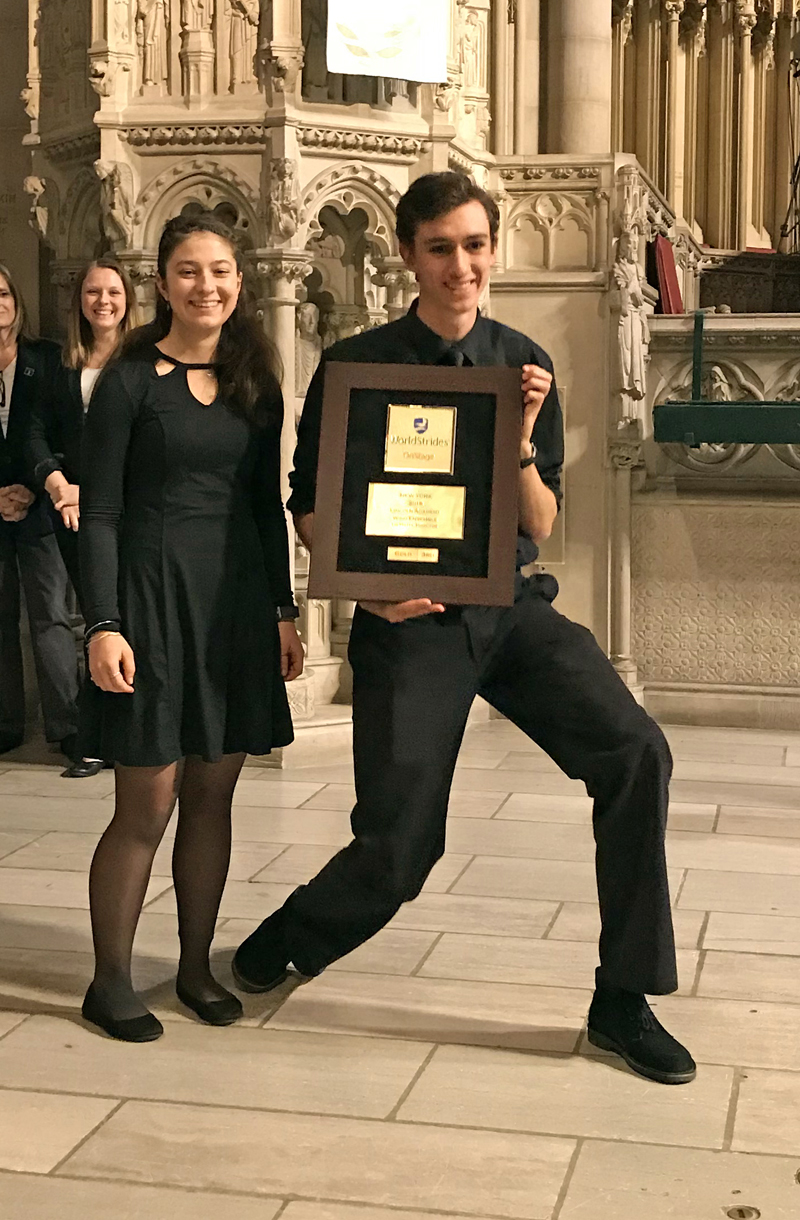 “The highlight of this trip is always the festival itself,” said Lincoln Academy band teacher Liz Matta, who organizes the trip every two years. “For students to put together a year’s worth of music and take their show on the road is a huge challenge. When these judges, who are watching hundreds of other student musicians perform during the weekend, give us a Gold rating, and even more importantly, specific feedback on our performance, it really means something to all of us.”

Sophomore French horn player Quinn Straus found the festival judges’ feedback to be constructive and affirming, saying “it helped me learn to play better as a musician. It was a good experience to get feedback from professionals who have been doing music their whole lives. They could point out little mistakes we were making that we didn’t even realize we were making, because they have been doing this for so long … They said things that encouraged us to keep playing music.”

While in New York, the students also attended a performance of the New York Philharmonic Orchestra, enjoyed an evening of jazz at Birdland, took a dinner-dance cruise on the Circle Line, saw “Hello, Dolly!” on Broadway, and visited the reflecting pools at the 9/11 Memorial.

“My band teacher in high school took us on a trip to this type of festival every year (New York, Philadelphia/Gettysburg, Montreal/Quebec, and Washington, D.C.), and those trips changed my life,” said Matta. “I will keep running this trip as long as possible, because I know how important this kind of experience can be for students. Seeing the City with their peers, performing in this incredible space, and experiencing these world-class shows — there is nothing like it.”

“Alternating years with the band gives us a nice rhythm in the LA music program,” said Preston. “Taking students to New York is expensive, and doing it once every two years is about the right pace. We will be ready to go in April of 2019!”

“New York was really fun,” said sophomore trumpet player Toby Seidel. “It was cool getting to play music that was so polished, since we have been playing it for so long.”

Galen Daly-O’Donnell, a sophomore saxophone player, agrees: “New York is a very musical place. There are so many opportunities to see great music there: the Philharmonic Orchestra, Broadway, the jazz scene. It is incredible to be able to be in that environment playing your music.”