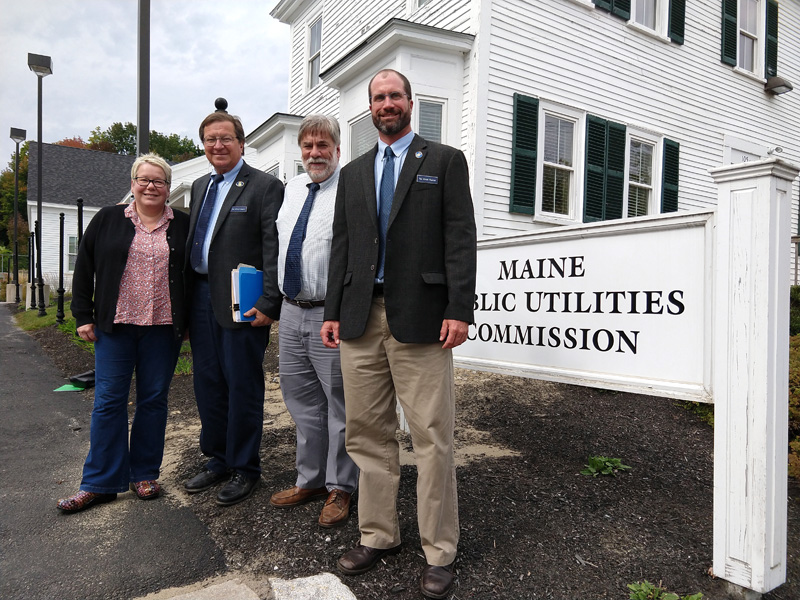 Four members of the Maine House of Representatives met with Public Utilities Chairman Phil Bartlett on Monday, Sept. 23 to demand that Central Maine Power be held fully accountable for the billing and metering errors that have cost individual customers thousands of dollars in overcharges since the utility rolled out its error-prone “smart” system in late 2017.

The meeting was arranged by Rep. Jeffrey Evangelos, I-Friendship. Also attending the meeting were Reps. William Pluecker, I-Warren; Charlotte Warren, D-Hallowell; and Thom Harnett, D-Gardiner. The group was joined by PUC General Counsel Mitch Tannenbaum, who has served the PUC in a legal capacity for 34 years.

Evangelos asked for the meeting subsequent to his testimony delivered to the PUC on July 22 at the PUC headquarters in Hallowell, where he demanded that the PUC force CMP to provide full customer refunds. Evangelos stated that he “was alarmed at news reports that indicated the PUC staff had taken the position that the billing issues were all weather-related. That’s absolute nonsense — 100,000 Mainers are not lying and our group is determined that Maine ratepayers receive justice.”

Warren pressed Bartlett on the billing and metering errors. “What am I supposed to tell my constituents who are calling me and who are out hundreds or thousands of dollars due to the billing errors? What are you going to do to make these people whole?” said Warren.

Bartlett responded that the first thing he wanted the legislators to do was “have their constituents call the PUC’s Consumer Assistance Division at 1-800-452-4699 and file a complaint, get their name on the list for further investigation. This will allow the customer to pay only what they had been paying before the billing and metering errors emerged in 2017-2018.”

Bartlett also indicated that, of the 4,000 formal complaints the PUC had received, all but 1,243 had been resolved.

Bartlett admitted that many people had not received refunds but that the investigation is ongoing. He stated that “it will be 60-90 days out before the PUC commissioners finish their investigation.”

Tannenbaum agreed with Pluecker, stating that “the worst part of this billing error situation was that Maine people have lost their faith in CMP and it will be difficult to repair the damage.”

Harnett asked Bartlett about the status of the CMP rate increase under consideration by the PUC: “Seriously, you’re not going to approve a rate increase for CMP while this billing error investigation is going on?”

Bartlett replied, “No, there will be no action on any rate increase until the billing error case is fully resolved.”

Harnett also pressed Bartlett about the cost of the billing errors, demanding that “Maine ratepayers should not bear the cost of making people whole, that CMP should be held solely accountable for their errors.”

Evangelos agreed, telling Bartlett that “the cost of these CMP errors be treated like any major mistake in the corporate world, which is a charge against earnings. We’re not going to allow CMP’s customers to pay a penny for CMP’s mistakes.”

Bartlett agreed with the legislators, stating, “We’re not going to allow ratepayers to pay for these mistakes.”

Bartlett responded, “Yes, it is very likely that any rate increase consideration would have to be balanced against the billing and metering system problems as well as deficiencies in customer service.”

The four legislators raised serious concerns about the recent findings of PUC staff that concluded the problems were all weather-related. The legislators pointed out that public advocate Barry Hobbins produced a study conducted by the Portland firm Berry Dunn, the largest certified public accounting and management consulting firm in Northern New England, that contradicted the PUC’s staff findings and confirmed that the billing and metering problems were real and were caused by various technical factors that allowed for inaccurate bills to customers.

In response, Bartlett stated that while his staff had issued such a report, the three PUC commissioners had not taken a position on it and are working with Hobbins to resolve the dispute.

The legislators also expressed deep concerns about the foreign ownership of CMP. “It’s so easy from the corporate desks in Spain to get away with this mess,” Evangelos said. “The whole country went wild on a merger and acquisition spree and now we have a corporation that is unaccountable for their actions. This never happened when CMP was a locally owned utility.”

PUC attorney Tannenbaum agreed. “I’ve been here 34 years and it is certainly true that things have changed a lot since the foreign acquisition of CMP.”

Warren summed up the feelings of the four legislators, especially when it came to senior citizens sitting at home on a limited fixed income. “In some of these cases, these billing errors amount to 50% of a person’s monthly Social Security check. It’s a disgrace,” she said.

The four legislators plan on continuing their discussions with the PUC and will be receiving information from Hobbins as the investigation continues. In the meantime, the legislators urged their constituents to call the 800 number and file a complaint if their bill was affected by the metering and billing errors.

(Clarification: An earlier version of this submitted article online and on page 4B of the Oct. 3 print edition quoted Maine Public Utilities Commission Chair Phil Bartlett as saying the PUC has resolved all but 1,243 of 96,000 complaints about Central Maine Power Co. billing errors. While ratepayer advocates claim upward of 96,000 billing errors, the PUC has received only 4,000 formal complaints, according to PUC Administrative Director Harry Lanphear.)