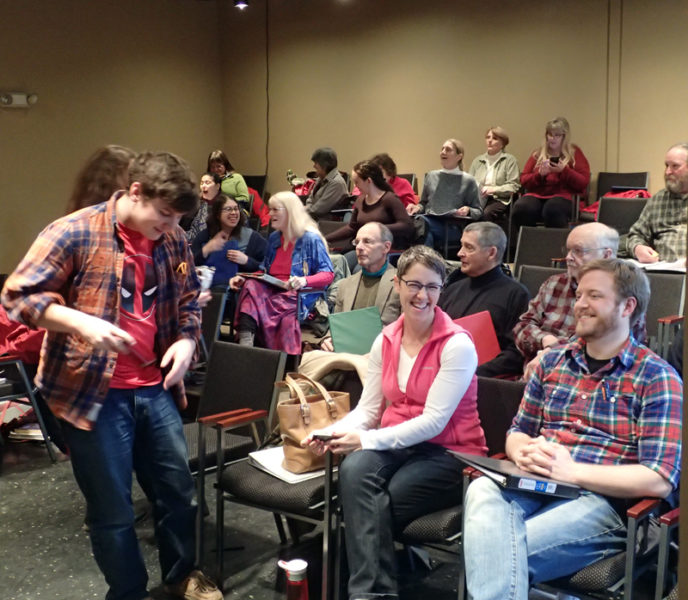 Front row from left: Roosevelt Bishop, Victoria Hamilton, and Joel Biron enjoy some fun with members of The Spit Spot Singers at a recent rehearsal.

LCCT, the resident theater company at Damariscotta’s Lincoln Theater, is pleased to announce the company of its upcoming production of “Mary Poppins – In Concert,” which takes to the Lincoln Theater stage on the weekend of March 17. Joining the chorale of 30 vocalists, known as The Spit Spot Singers, and accompanied by a full orchestra, The Poppins Pops, will be soloists from across Midcoast Maine, including Victoria Hamilton, of Wiscasset, as Mary Poppins; Roosevelt Bishop, of Southport, as Bert; Joel Biron, of Topsham, as Mr. Banks; Emily Mirabile, of Boothbay, as Mrs. Banks; Emme Harris, of Southport, as Jane Banks; and Andrew Lyndaker, of Newcastle, as Michael Banks.

Based on the series of children’s books by P.L. Travers and the Disney film, “Mary Poppins” tells the story of the Banks family, who live in a big house in London on Cherry Lane. Things are not going well for the family. The children, Jane and Michael, are out of control and in need of a new nanny. They have their own ideas about what sort of caretaker they should have, while their parents — particularly Mr. Banks — are insistent on someone strict for the job. When a mysterious young woman, Mary Poppins, appears at their doorstep, the family finds that she is the answer to their prayers, but in a most peculiar way. Mary Poppins takes the children on many magical and memorable adventures, but Jane and Michael aren’t the only ones she has a profound effect upon. Even grown-ups can learn a lesson or two from the nanny who advises that “anything can happen if you let it.”

The production is conceived and directed by John Mulcahy. Performances are Friday, March 17 at 7:30 p.m.; Saturday, March 18 at 2 and 7:30 p.m.; and a final matinee performance at 2 p.m. on Sunday, March 19. The show is suitable for the entire family. tickets are $20 for adults, $18 for Lincoln Theater members, and $5 for youth age 18 and under. As many of these concerts in the past have been completely sold out, people are encouraged to get tickets early. They can be obtained by calling the box office at 563-3424 or visiting the theater office on 2 Theater St. in Damariscotta from 10 a.m. to 1 p.m., Tuesday-Thursday.