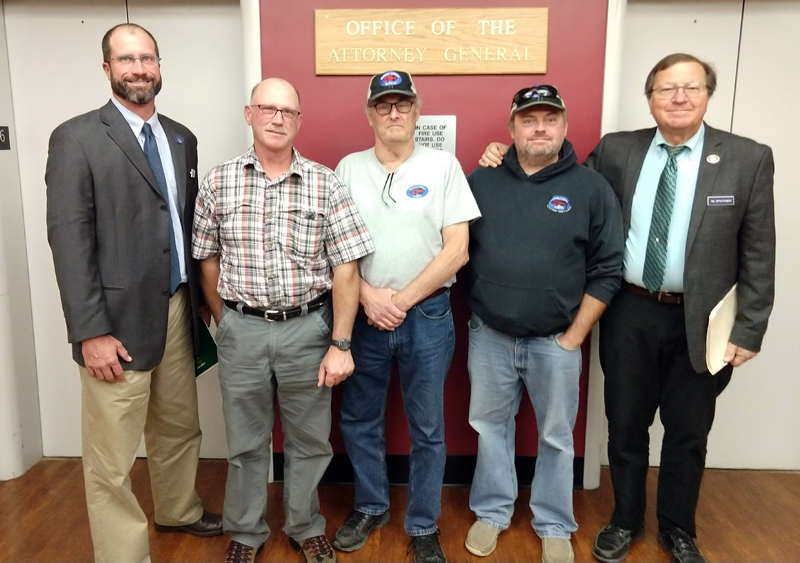 Two area legislators, Rep. Jeffrey Evangelos, I-Friendship, and Rep. Bill Pluecker, I-Warren, led a delegation to the Office of the Maine Attorney General to press the state’s attorney to provide a full range of legal representation for Maine’s lobster industry in the face what the representatives say are draconian and unjustified measures being promoted by National Oceanic and Atmospheric Administration to restrict lobster gear in reference to the right whale protection.

Maine Attorney General Aaron Frey and two staff attorneys who work in his office and who represent the Department of Marine Resources heard the presentation by the legislators on Wednesday, Sept. 18. Joining the legislators in pressing the case were Philip Bramhall, co-owner of Bramhall’s Lobster Wharf in Friendship; Carl Woodman of Owls Head; and Jeff Woodman, who owns and operates Mainely Lobster, out of Thomaston.

In a joint statement released after the meeting, Evangelos and Pluecker stated that “the attorney general and his staff listened to our concerns carefully. The staff explained that there is a two-track battle going on at the moment, one in federal court and one with the regulators.”

Bramhall impressed upon the state’s attorneys the importance of the lobster industry to the coastal economy, stating that “it’s not just the 4,500 lobstermen and -women going out to haul each day, you have to add in another 5,000-plus sternmen, and all the families and children dependent on the industry. Then add in all the other people and businesses dependent on the success of the fishery, from banks, to bait dealers, boat builders, trap companies, car and truck dealerships, and everyone else, (and) you’re talking easily 50,000 to 100,000 people.”

Jeff Woodman told the attorney general “that if NOAA succeeds in promulgating unreasonable gear restrictions, there would be an economic depression from Kittery to Eastport, followed by numerous bankruptcies.” Carl Woodman agreed, stating that “we all care about the right whale; we’ve been practicing conservation for 20 years. But where’s the evidence that Maine’s lobster industry has ever harmed a right whale? There is none. The vast majority of whale deaths are in Canada. Why should we be taking the hit for them?”

The attorney general and his staff told the group that they are on the case and are working carefully with Commissioner Pat Keliher, who is negotiating with NOAA as they develop their proposal.

Evangelos and Pluecker stated that they “wanted the attorney general’s office to promise they would go to court and intervene on behalf of the lobster industry.” In response to this request, the staff attorney, who also represents the Department of Marine Resources, stated that “in the event NOAA proposes draconian or unreasonable measures, I want you to know we’ve got your back and we plan on doing everything we can to assure that any proposed regulations are reasonable, and if they aren’t, all legal options are on the table.”

After the meeting, the lobstermen and the two legislators met. The lobstermen issued a statement, stating, “We’re very satisfied with the results of the meeting. We came up here to secure legal representation for our industry and we left confident that this is in fact the case.”