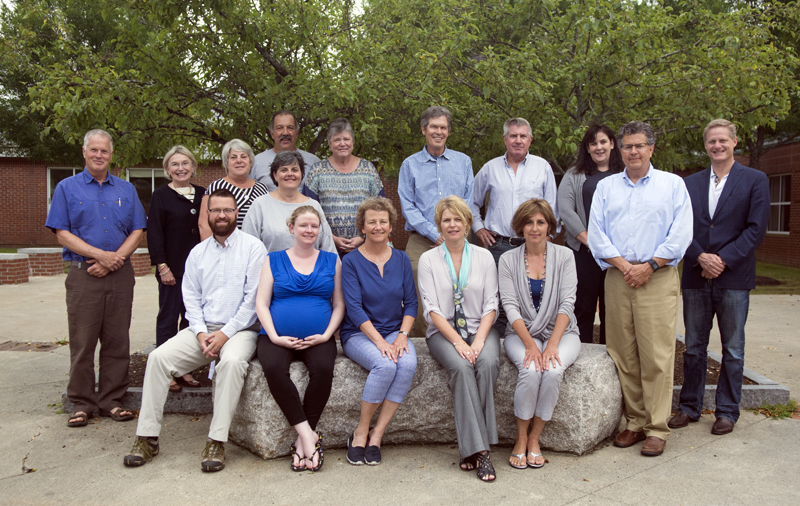 At its annual meeting July 18, the Lincoln Academy Board of Trustees welcomed four new members: two local residents, and two alumni who live in other cities but have strong ties to the Midcoast community. The four new board members are Betty Allen, of Newcastle; Paul Anderson, of Pemaquid; Judi Hilton, of Boston; and Chris Olson, of Chicago. Each new member will serve a three-year term, renewable for up to 12 years.

“I am pleased that the trustees have invited these four individuals to join them in carrying out their work in support of Lincoln Academy,” said Lincoln Academy Head of School David Sturdevant. “They are a talented and skilled group, and they bring a wealth of experience to the board. I look forward to working with them as we move forward.”

Betty Allen, of Newcastle, is a geologist with nearly 40 years experience in industry and academia. She worked in petroleum exploration and development for Shell Oil Co. and Methane Resources Group, a company she founded, before turning to more academic interests, teaching courses in geology and global energy at both Mount Holyoke College, where she got her undergraduate degree, and the University of Maine at Orono. She holds a doctorate in geology from University of Delaware.

“I am delighted and honored to join the Lincoln Academy Board of Trustees,” Allen said. “Although I am happily enjoying retirement here, I also feel it is a privilege to give my time to the school and community.”

Paul Anderson, of Bristol, is a retired business executive whose career has been focused principally in the energy sector. He served as CEO of BHP Billiton, Duke Energy, and PanEnergy. He currently serves as a non-executive director of BP PLC and BAE Systems PLC, both headquartered in London.

Prior to entering the energy sector in 1977, Paul was with Ford Motor Co. for eight years, including five years as a planning manager. A Richland, Wash. native, Paul earned a Bachelor of Science degree in mechanical engineering from the University of Washington and a Master of Business Administration degree from Stanford University.

Anderson served as global counselor for The Conference Board in New York, vice president and director of the Business Council of Australia, and as a member of the U.S. President’s Council of Advisors on Science and Technology. Locally, he serves on the board of the Lions Club and Pemaquid Watershed Association, and is a past board member of the Chocolate Church and Friends of Colonial Pemaquid. He and his wife, Kathy, live in Pemaquid. They have two adult daughters.

Judi Hilton, ‘91, recently retired from her position as chief operating officer of Cresa, a corporate real estate advisory firm with offices in Boston and other cities around the U.S. After graduating from Lincoln Academy, Hilton went on to study architectural engineering at Wentworth Institute of Technology, and later received her Master of Business Administration degree from Suffolk University.

As chief operating officer of Cresa, Hilton coordinated the day-to-day operating activities of the company through the development and implementation of organizational strategies, policies, and practices. Her responsibilities included the creation of programs to increase revenue and sales growth, as well as quarterly and annual financial goal and budget management. She lives in Boston but spends significant time in Jefferson, where she owns a home.

Chris Olson, ’83, is an investment manager in Chicago. After graduating from Lincoln Academy, he went on to further his post-high school education at Middlebury College, where he earned a bachelor’s degree in political science, and the University of Pennsylvania, where he received a Master of Business Administration degree at the Wharton School and a master’s degree in East Asian Studies at the School of Arts and Sciences.

Olson has spent time living abroad in Sweden, Taiwan, and Japan. He is currently a principal and portfolio manager for High Pointe Capital Management and is a chartered financial analyst. He serves as chair of the board for the Swedish Covenant Hospital in Chicago, where he lives with his wife, Charlene. Chris has two children who attended the Latin School of Chicago and are currently attending Princeton University.

“I am excited to have Judy, Betty, Chris, and Paul join our team,” said Lincoln Academy board Chair Chrissie Wajer. “Their breadth of knowledge and experience will be a great asset to the Board.”

The Lincoln Academy board meets monthly.