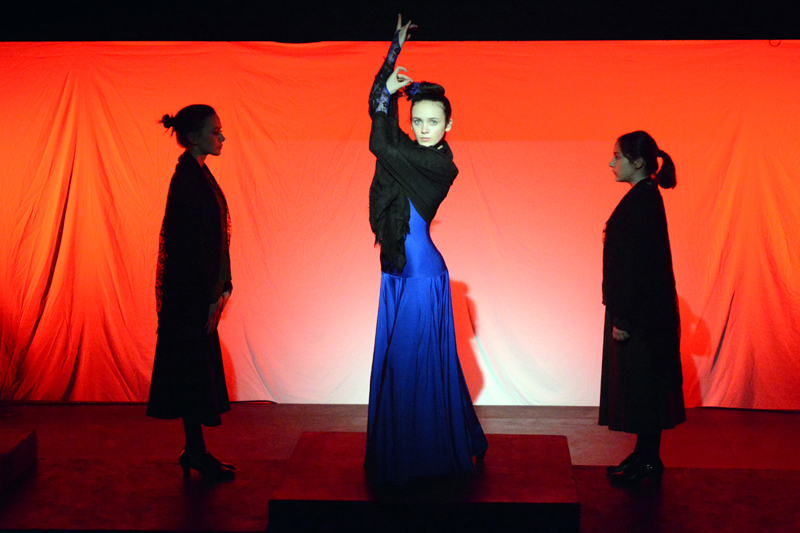 Lincoln Academy is the regional one-act champion for the 11th time in 12 years, despite moving from Class B to Class A this year. On Saturday, March 10, Lincoln Academy’s one-act play “Blood Wedding” earned first place in Class A at the regional one-act festival hosted by Medomak Valley High School in Waldoboro. The play will move on to the state drama festival later this month.

Lincoln Academy’s 2018 one-act play is a shortened version of “Blood Wedding,” by Federico Garcia Lorca, a modern dramatic work first performed in 1932. The original play, set in Spain, included strong dance and music from the flamenco tradition. This winter, Lincoln Academy students participated in workshops about flamenco culture, dance, music, and rhythm as part of the process of building an authentic version of Blood Wedding for the one-act competition.

“Our kids really hit the stage running at Saturday’s performance,” said Lincoln Academy theater teacher Griff Braley, who directs “Blood Wedding.” “They were clear and determined in their choices. When they all stepped forward together, an undeniable authenticity filled the stage and audience. This was one of the great factors at regionals. And, they were very well prepared due to strong work ethic and choices to prioritize this project in their lives.”

Two of the three judges at the regional festival awarded perfect scores to the cast.

“The best thing that can happen in a play is for judges to put down their pencils and experience it,” said Braley. “A few times in my career, including this one, I have gotten a completely blank score sheet back from a judge. That is a sign that they were in the play, not analyzing it. When we see that, we know we have succeeded.”

Nicholas Maiulis is a senior at LA who plays Leonardo in “Blood Wedding.” He said, “I’ve been in 11 plays since my freshman year — all of them have had powerful and successful moments, but last weekend’s performance of “Blood Wedding” stood out as perhaps the strongest performance by an entire ensemble. Everyone involved in this production brought their best work on Saturday, and I have been genuinely impressed with every single one of them. It’s been an honor to work with this cast and crew.”

Jaja Martin is the president of the Heartwood Regional Theater Company Board of Trustees and has attended many one-act festivals over the years. She was particularly impressed with Lincoln Academy’s performance this year, calling the play “larger than life.

“The curtain opened onto a stunning silhouetted tableau,” she said. “The attention to detail: expressive hands, authentic flamenco dancing, live guitar and cajon, and superb costuming made the play both professional and compelling. The actors gave life to their characters and wove a complex and beautifully executed story.”

The one-act cast and crew will move on to the Class A State Drama Festival, which will take place at Windham High School on March 23 and 24. At the festival, Lincoln Academy will compete with the other eight regional one-act winners from throughout the state. Audience members are encouraged to attend the festival, where each session includes productions by two or three schools. Information about the statewide festival is available at the Maine Drama Council’s Facebook page, facebook.com/medramafest.

The cast and crew will perform “Blood Wedding” for local audiences on Thursday, March 22 at 6 p.m. at the Parker B. Poe Theater. No reservations are required. An optional donation at the door will go to support the cast’s travel to the state festival.