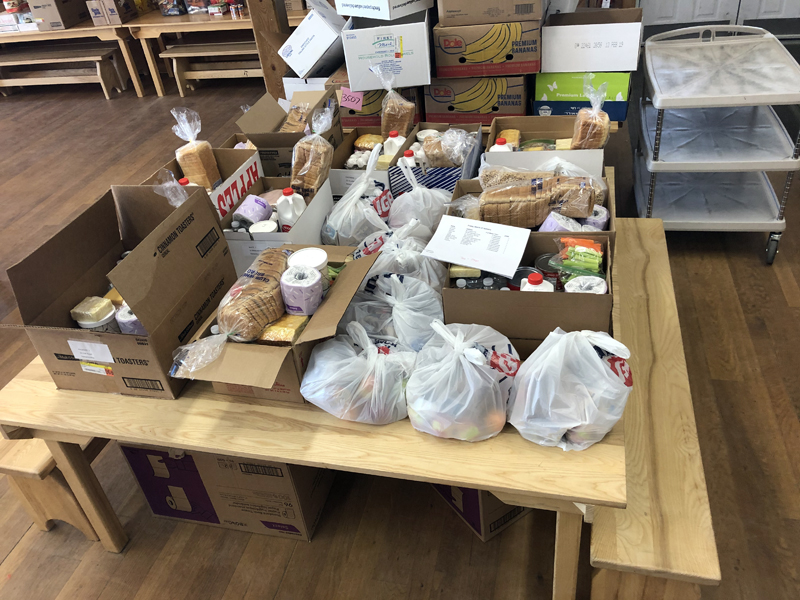 Many meals await delivery to Lincoln County families. The new Lincoln County Food Initiative is a collective of local businesses that are supporting residents during the COVID-19 pandemic.

In less than one month, an effort that started with a few dozen meals from the kitchen of Main Street Grocery in Damariscotta has grown into a multi-organization initiative that is delivering thousands of meals to Lincoln County residents. The project, now called The Lincoln County Food Initiative, or LCFI, describes itself as “an initiative to support Lincoln County Residents during the COVID-19 outbreak.”

The project started through an early response to the coronavirus outbreak by Jane Gravel, owner of Main Street Grocery. Gravel said that until a few weeks ago, grocery delivery was a very small part of her business. “We delivered on Fridays to certain people. It wasn’t a big number, but we took over a few delivery accounts when we bought Yellowfront grocery from the Pierces two and a half years ago.”

When Maine announced the first cases of COVID-19 in early March, all of that changed.

“We figured there would be people out there who didn’t want to come into the store, so we decided to deliver groceries to anyone who wanted to stay home,” continued Gravel. “Then I got a couple of calls from people asking for meals, so one day I cooked 35 meals in the deli after the store closed. I made Shepherd’s Pie, chili, macaroni and cheese, and delivered those. Then the phone started ringing.”

Gravel kept cooking, and she ran a free meal delivery service out of Main Street Grocery for almost three weeks. “We never charged anyone for a meal,” she said.

After the first week, Gravel got a call from Rick and Rosie Richards, owners of S. Fernald’s Country Store in Damariscotta.

“We decided to close Fernald’s after the first case [of COVID-19] was announced in Lincoln County,” said Rick. “Our bookkeeper asked what we would do with our perishable food, and suggested we donate it to Jane. We dropped off a bunch of deli meat and sandwich materials.”

“Rick and Rosie took one look at what I was doing, and they said, ‘We want to do more than donate deli meat’,” said Gravel. “They said they would try to pull together some money.”

“We posted that first food donation on our social media, and people seemed really supportive, so we decided to try a quick emergency fundraiser, and we raised $5,000 overnight through GoFundMe,” said Rick.

That $5,000 bought five pallets of food, but by the time it was delivered, the meal deliveries had outgrown Gravel’s small kitchen at Main Street Grocery. “I was asking for help anywhere I could find it,” Gravel said.

As food deliveries grew, so had the organizational needs behind the scenes. “I was trying to help a few people with food, not run a whole program,” said Gravel. So she and the Richards reached out to local organizations including the CLC YMCA, Healthy Lincoln County, the Ecumenical Food Pantry, Lincoln Academy, Kieve-Wavus, the Lincoln County Regional Planning Commission, as well as Representative Chloe Maxmin, who had already organized a phone bank to find out who needed help during the outbreak.

Mikael Andersson, Director of Food Services at Lincoln Academy, immediately offered to prepare meals. The food purchased by the online fundraiser was delivered to the LA Dining Commons, who prepared meals the week of March 19. Kieve-Wavus Education, Inc agreed to make the deliveries. After one week, Kieve-Wavus took over meal preparation as well.

“We were providing about 70 meals, three days a week for the program started by Main Street Grocery, plus delivering breakfast and lunch to 120 LA students,” said Andersson. “Meanwhile, Kieve-Wavus had staff available to prepare food as well as deliver it. It made sense for them to take over and for us to focus on LA families.”

Charlie Richardson, Director of Education and Operations at Kieve-Wavus, said that the new food program dovetails with his organization’s mission. “We realized we would not have any residential programming during the spring, so there was a void. In a normal year we would have had all of the AOS93 7th and 8th graders on our campus, so we reached out to schools first, but they have their own food programs for free and reduced-price lunches for students. We were looking for a way to stay mission-driven and continue to employ some of our people, and this opportunity came along.”

Currently Richardson and his team pick up food donations from restaurants, the Ecumenical Food Pantry, and other organizations, combine them with bulk food that they order through their supplier, and put together two deliveries a week to households in need. All purchased food is funded by donations to the Ecumenical Food Pantry, and each delivery includes a combination of prepared meals and groceries.

“We deliver on Tuesdays and Fridays,” said Richardson. “Friday’s delivery is 12 meals per family, Tuesday’s is nine meals. Friday’s delivery is Friday lunch through Tuesday breakfast. This week we got donations from Best Thai, who gave a bunch of fresh produce, and AOS93, who donated nine quarts of liquid eggs. We tailor our meals based on what comes through the door.”

Behind each delivery is a team of volunteers who ensures that people in need get services, volunteers stay safe, funds and food continue coming in, and everyone can communicate remotely since in-person meetings are impossible.

Jess Breithaupt of Healthy Lincoln County coordinates the group of partner organizations behind the effort.

“The group began meeting via Zoom on March 20,“ said Breithaupt. “In two weeks, we have made really impressive progress. We now have a hotline people can call and systems in place to respond to those calls and organize lists for food delivery. We also have a web page and online fundraising hosted by the Ecumenical Food Pantry, as well as new social media channels.”

As for Jane Gravel, she is happy the new system can handle the increasing demand for food delivery. She has her hands full with Main Street Grocery, which, including curbside pickups and delivery orders, marked its biggest sales day ever on Wednesday, April 1.