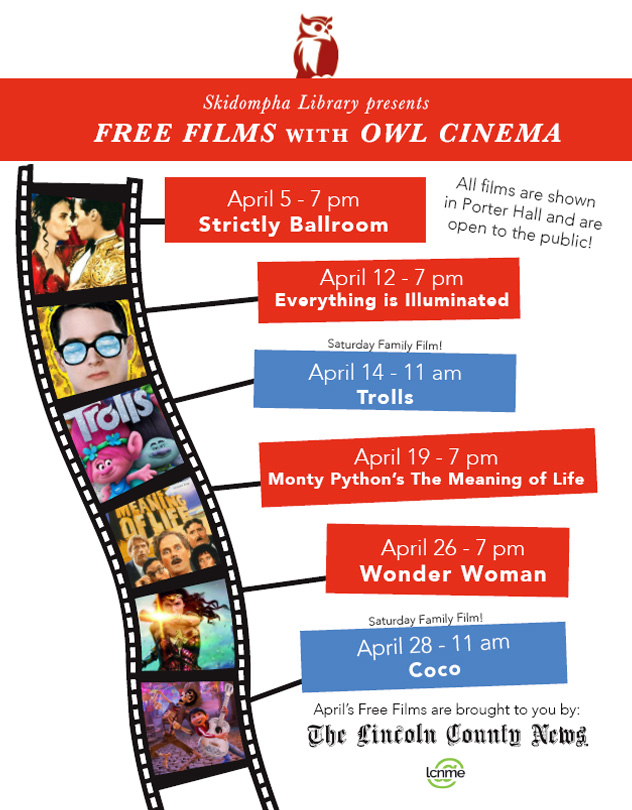 The Lincoln County News is proud to sponsor Skidompha Library’s Owl Cinema for the month of April.

Started in October 2017, Owl Cinema offers free movie showings to the community in the library’s Porter Hall. Movies are shown weekly on Thursday evenings and family films are shown every other Saturday.

“As a local business, we feel it is not only important, but necessary to support other local organizations,” Chris Roberts, publisher of The Lincoln County News, said. “Skidompha Library is an integral part of the community, and the film series is a great addition to its offerings.”

This month’s lineup consists of the following:

Thursday, April 5 at 7 p.m. – “Strictly Ballroom” (1992): This wildly offbeat comedy is about a male dancer (played by Paul Mercurio) who refuses to follow the accepted rules of ballroom dancing and creates his own style of choreography.

Thursday, April 12 at 7 p.m. – “Everything is Illuminated” (2005): This is the tale of a young man’s quest to find the woman who saved his grandfather in a small Ukrainian town that was wiped off the map by the Nazi invasion.

Saturday, April 14 at 11 a.m. – “Trolls” (2016): In this animated family film, an unlikely pair of trolls must embark on an adventure that takes them far beyond the only world they’ve ever known.

Thursday, April 19 at 7 p.m. – “Monty Python’s The Meaning of Life” (1983): Life’s questions are “answered” in a series of outrageous vignettes. This is the Monty Python crew at its funniest.

Thursday, April 26 at 7 p.m. – “Wonder Woman” (2017): An Amazon princess (Gal Gadot) finds her idyllic life on an island occupied only by female warriors interrupted when a pilot (Chris Pine) crash-lands nearby.

Saturday, April 28 at 11 a.m. – “Coco” (2017): Desperate to prove his musical talent, Miguel finds himself in the stunning and colorful Land of the Dead following a mysterious chain of events in this animated family movie.

All movies are free and open to the public. Popcorn is provided.

For more information or to sponsor Owl Cinema, contact Skidompha Library Director of Development and Communications Torie DeLisle at 563-1940.