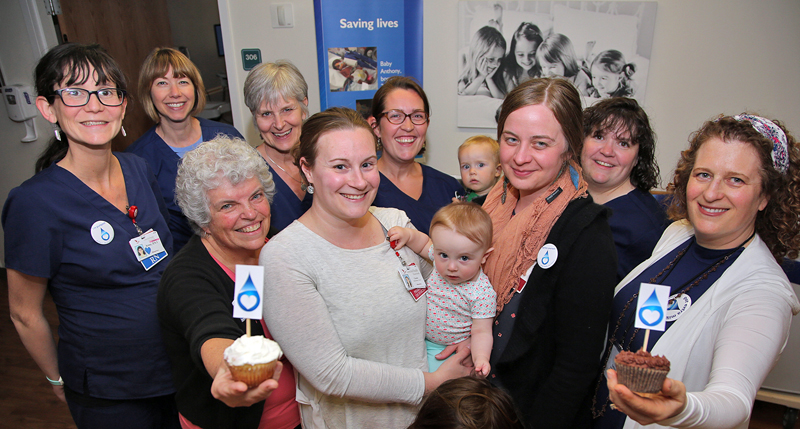 A milk depot is a community location where screened milk donors can drop off milk for shipment to a milk bank. The milk bank collects milk from mothers who have more milk than their babies need, and then screens, pasteurizes, and tests the milk, then dispenses it primarily to premature and sick babies whose mothers do not have enough milk for them. Human milk can be lifesaving for preterm infants.

“We are honored to be able to give back to the community in this new way,” said LincolnHealth Obstetrics Unit Manager Lynn Plumb. “The other two depots in Maine are in Portland and Yarmouth. LincolnHealth – Miles Maternity is now a convenient drop-off point for mothers throughout the Midcoast region and beyond.”

LincolnHealth Pharmacy Technician Cassie Balser has been donating milk to Mothers’ Milk Bank Northeast for several months and is excited to have a depot close to home. “I donate because I know there is a need in the community and I am blessed with producing enough milk to be able to help,” Balser said. “It is such a great feeling being able to help out not only the babies, but the mothers who wanted to provide breast milk for their babies but for some reason are not able to.”

Milk donor screening, modeled after blood donor screening, includes health history, physician approval, and a blood test. These are some of the many measures taken to ensure the safety of milk for the fragile premature and sick babies served by Mothers’ Milk Bank Northeast and the hospitals that use the milk. Milk from mothers who pass the screening is also pasteurized and tested by an independent lab to ensure safety before being dispensed to hospitals or families.

Human milk is especially protective against a life-threatening condition called necrotizing enterocolitis, which affects one in 10 of the smallest preterm infants. Human breast milk is estimated to lower the risk of this condition by 79 percent. It also lowers hospital costs by reducing costs for care and shortening hospital stays.

Donor milk is rapidly becoming the standard supplement to mother’s milk for preterm infants in neonatal intensive care units. In addition, an increasing number of community hospitals with regular and special care nurseries use donor milk when babies need a supplement to their mothers’ own milk. Currently, Maine Medical Center offers donor milk in its neonatal intensive care units and well-baby units, and several other Maine hospitals are expected to begin offering it soon.

Mothers who wish to donate milk can review guidelines on the milk bank website, milkbankne.org/donate, then contact a donor intake coordinator for screening at 617-527-6263 ext. 3 or donate@milkbankne.org. Approved donors can then drop off milk at LincolnHealth – Miles Maternity in Damariscotta. Call 563-4536 to schedule a time to drop off the milk.