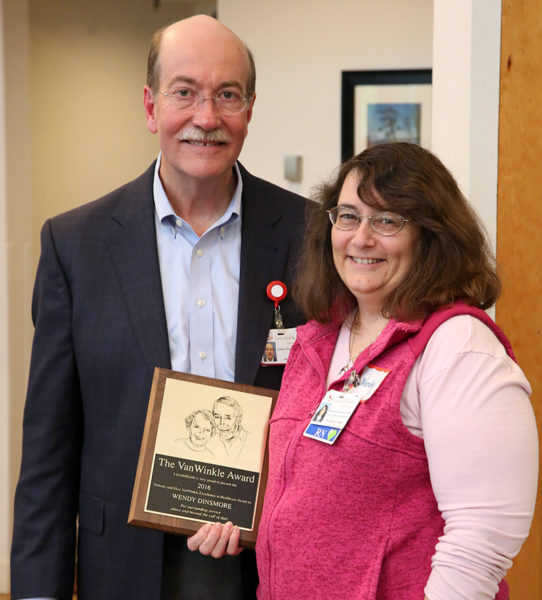 Registered nurse Wendy Dinsmore, a South Bristol native and current nurse manager at St. Andrews Village Retirement Community in Boothbay Harbor, didn’t always know that nursing was her calling — but everyone around her did. While working at a lumber yard and a Ford dealership, people began bringing injured employees to her to take care of. She wasn’t sure why, but they did, and she cared for them with a sense of tranquility.

After having countless people encourage her to become a caregiver, Dinsmore took a job as an evening housekeeper at Cove’s Edge in Damariscotta to see how she liked working in health care. While working, she convinced a nurse she admired to become accredited to teach a certified nursing assistant course. Soon after, Cove’s Edge hosted its very first CNA course and Dinsmore was the first accepted student. Her nursing career did not stop there.

Dinsmore became a registered nurse and earned her bachelor’s degree in nursing all while raising two children, Danny and Julie, with her husband, Tim. Over the past 26 years, Dinsmore has worked throughout what is now LincolnHealth in a variety of positions, from housekeeper to certified nursing assistant, registered nurse, teacher, minimum data-set coordinator, interim director of nursing, and now nurse manager.

To recognize her commitment throughout the years to her staff and residents, and the exceptional care she has provided, Dinsmore received the 2016 Webster and Elise Van Winkle Excellence in Health Care Award. This annual award is given to a LincolnHealth employee who most typifies the phrase “goes above and beyond.”

Dinsmore’s nomination was signed by 94 of her peers and included a series of testimonials demonstrating her acts of generosity and kindness, which happen daily. “Wendy cares for everyone she comes into contact with, and consistently goes above and beyond,” the nomination read. “If Wendy says she will do something, (the) residents know they can count on her.”

Upon receiving the Van Winkle award, Dinsmore’s father showed her a peer-nominated award that her grandmother, Mable Longe, received when she was a nurse — the first time Wendy had heard of this accomplishment by her grandmother. Dinsmore’s grandmother was the first of many who told her that she should become a nurse.

“I love working with the staff and residents. I really love seeing staff members do that one special little thing for residents,” said Dinsmore. “I always try to recognize those kind behaviors by giving out ‘goodie bags’ with a personal note acknowledging what they did.” Dinsmore’s simple gesture makes a big impact on the quality of care given to the residents and support provided to the staff.

It is safe to say that Dinsmore found her true calling in nursing. The residents, patients, and staff of LincolnHealth are glad she did.

For more information about health-care career opportunities at LincolnHealth, contact its human resources department at 563-4550.