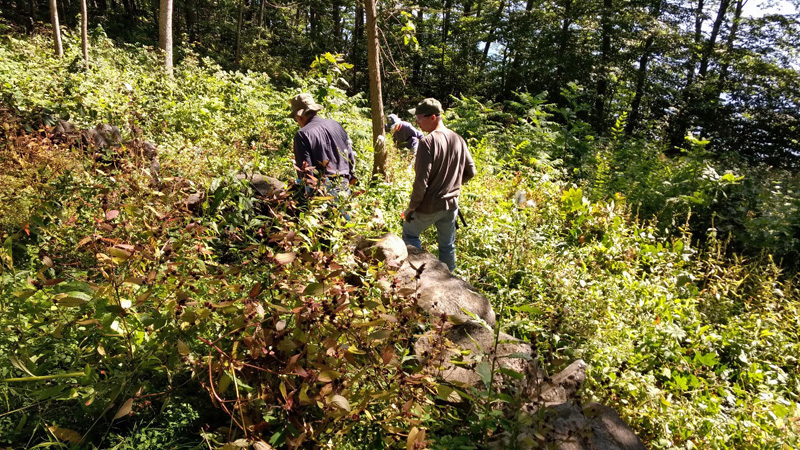 Several Newcastle Historical Society members as well local residents gave up their time on Sunday, Sept. 15 to help work on cemetery restoration at a historic burying ground on River Road.

The cemetery is the resting place of several early Newcastle settlers, including one of the earliest shipbuilders along the Damariscotta River, Nathaniel Bryant, who died in 1772 at the early age of 33. Paul and Nat Bryant and family, who operate Riverside Boat Co., are direct descendants of this early Bryant.

Other noteworthy names found in the cemetery include shipbuilder Col. George Barstow and family, and a large circular stone enclosure containing the Farley tomb. Barstow is a veteran of the American Revolutionary War.

As the brush is cleared, mapping and gravestone repairs will begin. The cemetery, which is on privately owned land, was established in the mid-1700s during conflicts between the Wabanakis and colonists. Specifically, in 1757, a massacre occurred at or near this location in which the Winslow garrison was ambushed and a woman named Mrs. Gray, married to a Winslow, and six, possibly nine, children were slain.

While none of the gravestones within the cemetery date to this tragic occurrence, there are numerous undressed fieldstones found in rows and in upright positions suggesting their use as grave markers. According to the president of the Newcastle Historical Society, Tim Dinsmore, it is quite possible that this tragic event resulted in the establishment of a burying ground at this location.

Anyone interested in helping with restoration and maintenance of this old Newcastle cemetery can email the Newcastle Historical Society at nhsmaine@gmail.com for more information.