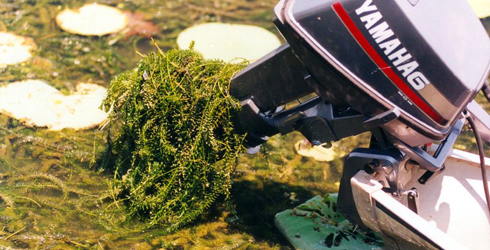 Hydrilla gets tangled in boat motors.

Thanks to hundreds of hours of volunteer time; public support from the towns of Jefferson, Nobleboro, and Newcastle; the Maine Department of Environmental Protection; and current and former staff of Midcoast Conservancy, the invasive plant Hydrilla was not found in Damariscotta Lake in 2017. This is the first year that no Hydrilla has been found in either infested location since it was first discovered in the lake in 2009.

The inlet Davis Stream in Jefferson has been without Hydrilla for three years now, but this is the first year no Hydrilla was found in Cranberry Cove on the west side of the lake.

Hydrilla was first found in Damariscotta Lake in 2009 by a trained volunteer. Since then, staff members from the Maine Department of Environmental Protection, the Maine Volunteer Lake Monitoring Program, Midcoast Conservancy, and many hundreds of volunteers have worked diligently each year to search for and remove any Hydrilla growing in the lake, while systematically searching the rest of the lake for potential infestations.

This success is a testament to the early detection and aggressive response to the invasive plant. As Hydrilla is the worst invasive aquatic plant in North America, and this is only the second Hydrilla infestation in Maine, the plant’s absence marks significant progress for the state as a whole. Damariscotta Lake further serves as a national example of how the plant can be managed.

While this is an exciting milestone, Damariscotta Lake is not yet considered absolutely free of Hydrilla. The real danger of this plant is that it grows tubers from its roots below the bottom sediment, which can remain there for years before sprouting again. Midcoast Conservancy staff and volunteers will continue to survey Damariscotta Lake for years to come to ensure any Hydrilla remains under control. Boaters will continue to see courtesy boat inspectors at boat ramps around the lake who help prevent any invasive plants or animals from entering the lake on boats or gear.

Midcoast Conservancy is extremely grateful for the incredible ongoing public support it has received from the towns of Jefferson, Nobleboro, and Newcastle to make this work possible. Its Hydrilla removal work and courtesy boat inspectors are funded in part by boater registration fees, which support invasive plant management throughout the state via the Maine Department of Environmental Protection and annual contributions from each town.