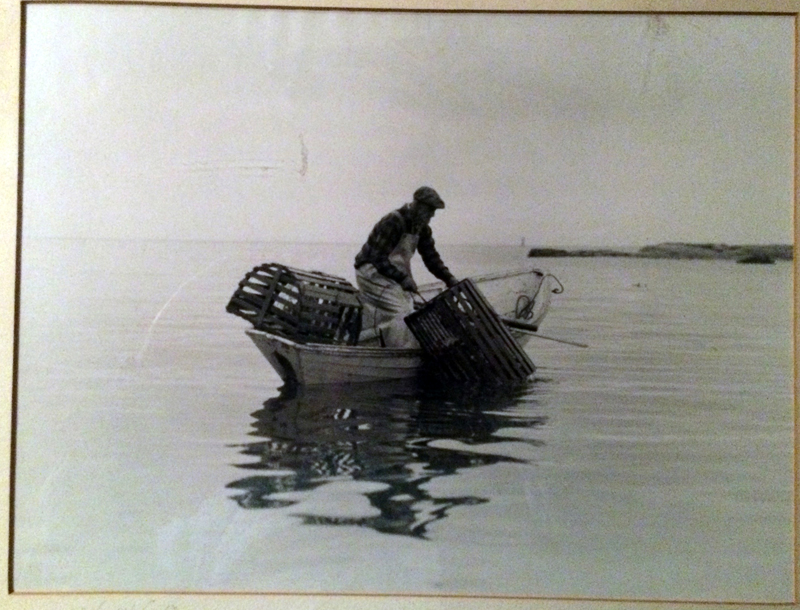 This photo, titled The Old Timer, was donated to the collection of the Old Bristol Historical Society by John Jicha, of Bremen. It was created by photographer J. Warren Crozier, probably in the 1950s, according to Chuck Rand, co-president and chair of the society’s collections committee. The fisherman is identified as Fred Brackett.

Major additions to its digital archive have been received by the Old Bristol Historical Society. The society has been loaned, for digital scanning, photos and historical materials about the Pemaquid Point community by Patricia M. Porter, who with her husband, John Porter, edited the newsletter of the Pemaquid Point Association for 10 years.

The major item loaned for scanning is a binder describing individual homes at Pemaquid Point, including photographs, histories, and reminiscences provided by the homeowners, compiled by the late Edith Hary, a former historian of the Pemaquid Point Association.

A collection of 117 postcards owned by Brenda and Frank Savaro, also from Pemaquid Point, has also been loaned to the society for scanning.

In addition, recently donated to the Old Bristol Historical Society by John Jicha, of Bremen, were two large framed photographs of lobstermen at work, created by photographer J. Warren Crozier, probably in the 1950s, according to Chuck Rand, co-president of the historical society and chair of its collections committee.

One of the photos, titled “The Old Timer,” depicts a fisherman identified as Fred Brackett hauling a lobster trap by hand. Rand thinks this Fred Brackett was born Aug. 20, 1884, the son of William T. and Esther Elizabeth “Lizzie” (Palmer) Brackett. Fred Brackett married Annie M. Tibbetts in Bristol on Dec. 24, 1909, and died on Sept. 24, 1972 in Whitefield.

The second photo, titled “Down East Fog,” pictures a fisherman identified as “Cowboy” Geyer. Rand has so far been unable to determine Geyer’s given name and invites help from readers. He can be reached at 553-0034.

Old Bristol Historical Society this month purchased PastPerfect software, which will facilitate access to the documents, images, and artifacts in the society’s collections, Rand said. According to PastPerfect, it is the world’s leading collections-management software, used by more than 10,000 museums and historical societies. Rand will begin the long-term project of creating records for each item in the society’s collection.

The society solicits additions to its collection both on a short-term loan basis for scanning or as a permanent donation. It seeks photos and documents that illustrate Bristol’s social and cultural history, according to Rand. The digital archive also includes historic portraits of Bristol residents identified by name so that those researching their ancestors can put a face to the corresponding name. Due to limited storage space, proposed permanent donations must be evaluated and approved by vote of the collections committee.

Images from the OBHS archives are regularly shared with the public on the society’s Facebook page, and as part of the society’s schedule of presentations.