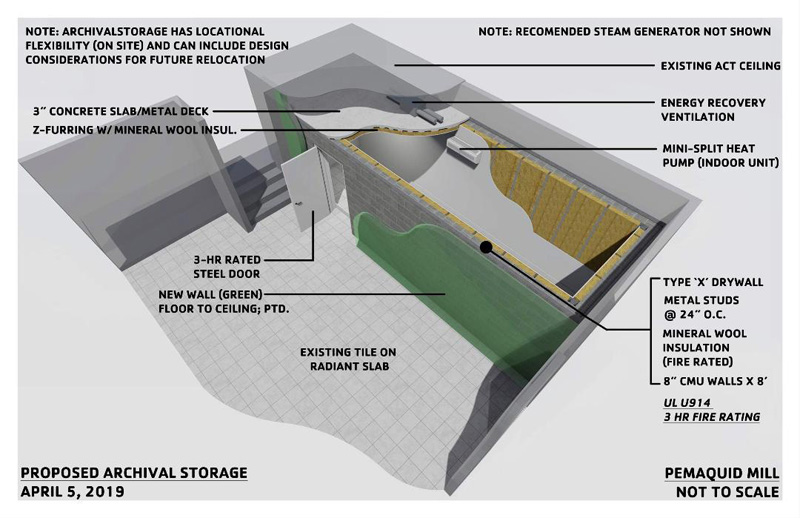 This drawing of the planned vault for the Old Bristol Historical Society archives and town records was prepared by architect Randy Smith, who donated his professional services. He is the son-in-law of board member Phil Averill.

The Old Bristol Historical Society expects to take over legal responsibility later this summer for the former Poole Brothers/Hammond Lumber retail store as well as the old Pemaquid Mill located at the Pemaquid Falls Preserve of Coastal Rivers Conservation Trust (formerly the Damariscotta River Association and the Pemaquid Watershed Association).

The society hopes to relocate its headquarters to the former retail store, and to build a climate-controlled, fire-resistant vault there to store the society’s archives and town records.

Society Co-President Robert Ives says the retail store represents the adaptive reuse of buildings, which occurred frequently in Bristol history. According to Ives, the house originally stood on Fir Hollow Road in Bristol. Poole Brothers owner Carl Poole Sr. purchased it and had it moved by oxen to its present site. Carl Poole Jr. and wife, Emmy, raised their family on the second floor above the store until the early 1970s, when they had a home built on Old County Road and then used the upstairs for business purposes as well.

The society estimates the cost of a needed new roof and furnace, plus minimal interior remodeling, at around $25,000.

The 27-by-10-foot temperature- and humidity-controlled vault is planned for the area of the store where small bins of hardware items were located across from the counter. It would store historical documents, town records, old photographs, records from various town organizations, and historical artifacts in the society’s collection. At present, many of these items are stored in the unheated McKinley School, in the attic of town hall, or in the homes of board members. The society expects completion of the archival vault will encourage community members to consider the facility as a repository for their historically significant images and artifacts.

Around $12,000 has already been raised for the vault project, including a $9,500 grant from the town approved by voters at the town meeting earlier this year. About $20,000 more will be needed for the vault. Adding the needed work on the building, the total amount still needed is around $45,000.

The Old Bristol Historical Society has electronically scanned more than 3,400 images for its digital archive and is continuing that project. The society believes it is also important to preserve original documents for future historical research. As technology evolves, digital images must be transferred to newly developed storage media so they remain accessible. The storage media themselves are subject to deterioration and should be stored under climate-controlled conditions for extended life.

The Old Bristol Historical Society invites the community’s help to build the vault and turn the retail store into a history center and office space. Contributions may be sent to OBHS, P.O. Box 87, Bristol, ME 04539, with “history center” on the memo line of the check. Those who wish to designate a contribution to just the vault or just the building renovation should so indicate on the memo line.