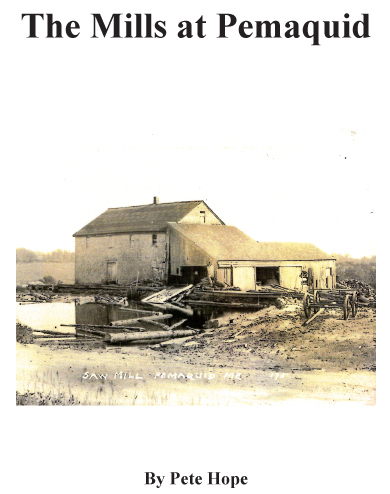 The cover for “The Mills at Pemaquid” by local history writer Pete Hope.

A 20-page booklet, “The Mills at Pemaquid,” by local history writer Pete Hope has been published by the Old Bristol Historical Society.

Hope, who was founding president from 2003 to 2011, donated the manuscript to the society as a fundraising project. He is the author of five books: three cover the histories of New Harbor, Round Pond and Louds Island, and the Pemaquid area, plus “The Diaries of Arthur Cox: Round Pond Jack of All Trades” and “Bristol’s Greatest Generation in World War Two.”

The new booklet is available for $10, including shipping, handling and tax, by mailing a check to Old Bristol Historical Society, P.O. Box 87, Bristol, ME 04539. It includes 16 maps and photos. All proceeds benefit the society’s current projects, including structural work to straighten and strengthen the mill, building a walk-in archival vault at the Bristol History Center, and initial work to develop Pemaquid Falls Park.

In his introduction, Hope writes that the project was particularly rewarding because it was mostly based on research into original sources, such as town meeting and tax records, deeds and wills. In contrast, Hope’s earlier books include material based on numerous oral history interviews with elderly residents.

Hope’s latest work starts with the successful community campaign in 2018 to purchase the mill property when Hammond Lumber closed its Pemaquid Falls location. After briefly hypothesizing about possible colonial era mills at the location, Hope concentrates on the two families, including in-laws, who owned and operated a mill near the outlet of the river for nearly 200 years.

The book includes a reproduction of a survey sketch done in 1763 of an adjoining property, which shows an existing mill on property at the falls owned by Robert Given.

A mill on that property was owned in turn by Given’s widow Jane, his son-in-law Capt. Thomas Miller, Miller’s sons William and Gustavus; their brother-in-law Oakman Ford, and Ford’s son William Ford in partnership with his brother-in law William Boyd. William Ford sold the mill out of the family in 1911, after Boyd’s death in 1910.

Based on construction techniques used, Hope writes that the present mill building probably dates to the early 19th century, perhaps to the period of Capt. Thomas Miller’s ownership. The historical society intends to turn it into a museum demonstrating how the mill worked, with other exhibits about early Bristol industries.

The Poole family began its long ownership of the business when Chester Poole bought the mill with a partner in 1923. In 1927, William Poole joined Chester Poole to form Poole Brothers Lumber. Two more generations of the Poole family owned the lumber yard: Carl Poole Sr. beginning in 1940 and Carl Poole Jr. beginning in 1981, until merging with Lavalley Lumber in 2005. Hammond Lumber purchased the three former Poole Brothers locations in 2011.