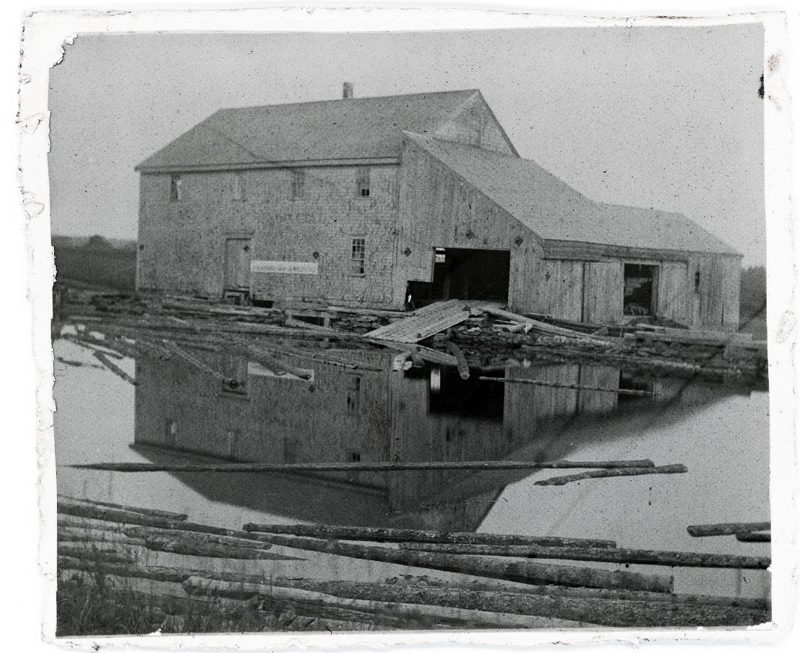 An 1896 photo of the Mill at Pemaquid Falls shows a nine-over-six window next to the ramp which was used to pull logs through the open door. (Photo courtesy Chuck Rand)

The Old Bristol Historical Society has obtained a photo of the old Mill at Pemaquid Falls which is approximately 14 years older than the earliest photo of the building previously held in the society’s collection, dating to 1896.

The society’s Mill Committee is restoring the front of the building to its historical appearance. The newly-found photo shows a major discovery: the presence of a nine-over-six window on the first floor, near the lean-to roofed addition which contained the saw rig.

An historically accurate nine-over-six window has been ordered and the society plans to install it as early as this week. Earlier this year the society refurbished and installed old windows on the second floor and changed the arrangement of doors to match the historic photos.

The earlier photo was discovered in time for the reproduction window to be installed before the exterior wall of the main second story section of the mill is re-shingled later this month. The old wooden shingles are in poor shape, with some falling off the wall. During working sessions last month, 14 volunteers dipped the cedar shingles into wood preservative to extend their lifespan.

Previously, the oldest known photo of the mill was dated from between 1910 and 1913, which was so determined because the old Bristol High School, built in 1910, was visible in the background without its addition that was built in 1913. Mill Committee chair Phil Averill says the ground floor window was also present in the circa-1910 photo, but much of it was hidden behind a pile of lumber.

The 1896 photo was acquired at a yard sale in Tiverton, R.I., with which Bristol has historic links through the pogy fishing and pogy oil processing industry.

It was part of an album of hand-dated and labelled card photos which included views of the Pemaquid Point Lighthouse, the “Neptune’s Head” rock formation at Pemaquid Point, the big beach at Pemaquid Beach, flooding at Head Tide, and cadets from Bath marching at the Topsham Fair. The album was found when Frank Staskiewicz, of Tiverton, forced open the lock of the old trunk he had purchased. He resold the album in an eBay auction won by a member of the historical society.