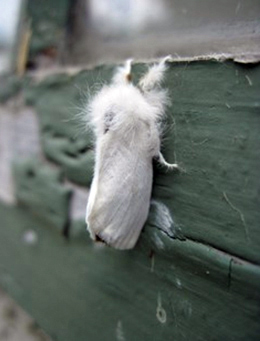 The fat, fuzzy white moths with brown bodies around people’s lights over the past three weeks may be browntail moths. The Maine Forest Service and the Maine Department of Agriculture, Forestry and Conservation would like the public’s help in tracking the moth’s flight. Go to surveymonkey.com/r/mebrowntail to fill out a survey on where and how many moths were seen.

The caterpillar stage of this insect feeds on the foliage of many hardwood trees and shrubs in May and June. They particularly like oak and apple trees. Caterpillar feeding causes reduction of growth and occasional mortality of valued trees and shrubs.

While feeding damage may cause some concern, the primary human impact from the browntail moth is the result of contact with poisonous hairs found on the caterpillars. Contact of these hairs with human skin causes a rash similar to poison ivy that can be severe on some individuals. People can also experience respiratory distress from inhaling the microscopic hairs that blow around in the air.

Over the past three decades, the browntail moth has been a problem along the Midcoast and on the islands of Maine. The population is now spreading further inland and Downeast to communities such as Poland, Belgrade, Burnham, Eddington, and Deer Isle. Many people in these recently colonized areas are unaware of the impact that browntail moths can have on them or their trees. Knowing where moths have been seen in large numbers can help give people a heads-up as to what they may have to deal with next spring.

Controlling the moths is not practical. If people are seeing large numbers of white moths, they should learn about what they can do if the caterpillars end up in their yard.