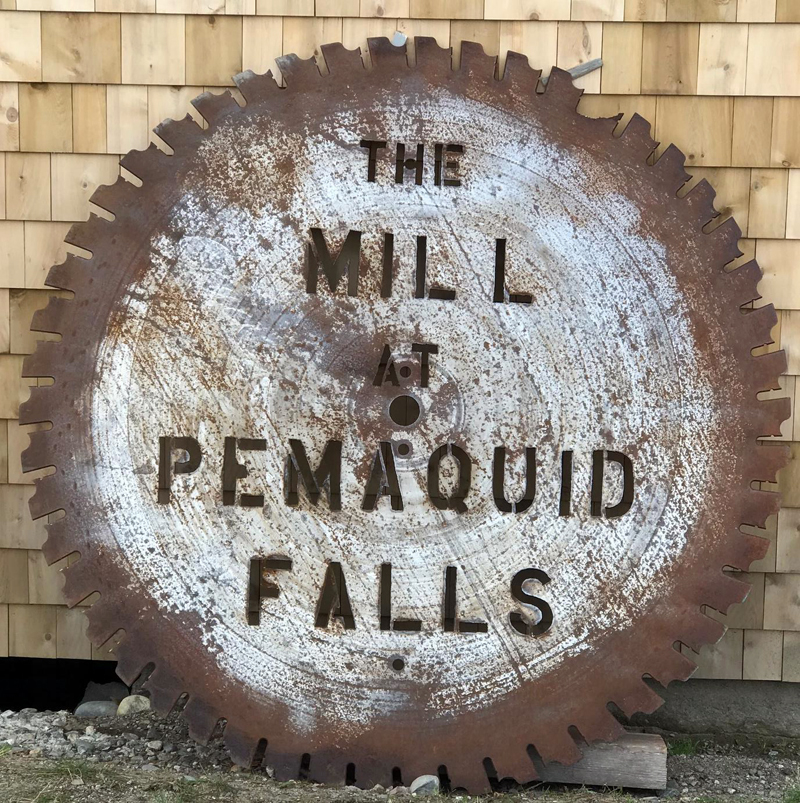 A massive 66-inch-diameter saw-blade sign rests against the Mill at Pemaquid Falls. A movable stand will soon be constructed. (Photo courtesy Mark Ziarnik)

A new sign has arrived at the Mill at Pemaquid Falls, fashioned from a 66-inch-diameter saw blade.

The sign was made by Elmer’s Barn in Coopers Mills, which sells antiques and vintage items, and is known for its saw-blade art. The lettering was cut out of the steel blade by laser.

Old Bristol Historical Society Mill Committee Chair Phil Averill plans to build a temporary stand to support the blade in an upright position. It will need to be both movable, because a permanent sign might be in the way of contractor access during planned restoration work in the next six months, and sturdy, because Averill estimates that the massive blade weighs more than 150 pounds.

Averill, a regular visitor to Elmer’s, was looking for historically accurate windows for use in the mill when he spotted the store’s big pile of sawmill blades and got the idea for the sign. Old Bristol Historical Society board member Kay Hannah drew the design, which the board approved, and volunteer Ericka O’Rourke drew the fabrication drawing for the artist who cut the lettering. The sign is Averill’s donation to the mill.

Averill plans to consult with The Carpenter’s Boat Shop on design and construction of the movable stand. He expects the sign will be installed in a permanent location next summer. Between now and then the society plans to do major structural work to straighten and strengthen the building, as well as to replace deteriorated roofing and siding, if sufficient money can be raised. Contributions may be mailed to the Old Bristol Historical Society at P.O. Box 87, Bristol, ME 04539.

The effort to save and restore the mill as a museum began 2 1/2 years ago, but Averill said that people still ask him where the mill they have read about is located. The sign should help, he thinks.

He said the mill’s early business came primarily from grinding grain and combing wool fibers. Lumber production did not become its main business until after the Civil War.