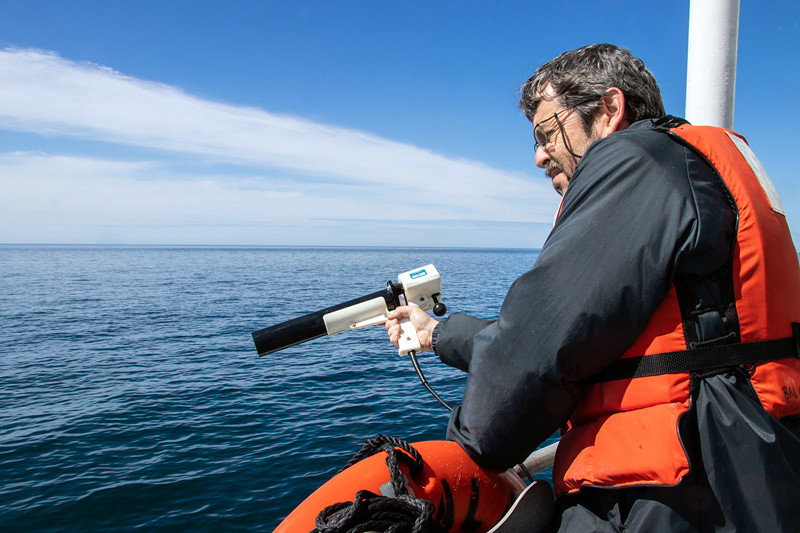 Researchers have advanced a new way to see into the ocean’s depths, establishing an approach to detect algae and measure key properties using light. A paper published in the scientific journal “Applied Optics” reports using a laser-based tool, “lidar,” to collect these measurements far deeper than has been typically possible using satellites.

“Traditional satellite remote sensing approaches can collect a wide range of information about the upper ocean, but satellites typically can’t ‘see’ deeper than the top five or ten meters of the sea,” said Barney Balch, a senior research scientist at Bigelow Laboratory for Ocean Sciences and an author of the paper. “Harnessing a tool that lets us look so much deeper into the ocean is like having a new set of eyes.”

The lidar system uses light emitted by lasers to gain information about particles in seawater, much as animals like bats and dolphins use sound to echolocate targets. By sending out pulses of light and timing how long it takes the beams to hit something and bounce back, lidar senses reflective particles like algae in the water.

Lead study author Brian Collister used a shipboard lidar system to detect algae and learn about conditions deeper in the ocean than satellites can measure. The research team on this 2018 cruise was composed of scientists from Old Dominion University and Bigelow Laboratory for Ocean Sciences.

“The lidar approach has the potential to fill some important gaps in our ability to measure ocean biology from space,” said Collister, a Ph.D. student at Old Dominion University. “This technique will shed new light on the distribution of biology in the upper oceans, and allow us to better understand their role in Earth’s climate.”

In the Gulf of Maine, the team used lidar to detect and measure particles of the mineral calcium carbonate, gathering information about a bloom of coccolithophores. These algae surround themselves with calcium carbonate plates, which are white in color and highly reflective. The plates scatter light in a unique way, fundamentally changing how the light waves are oriented — and creating an identifiable signature that the lidar system can recognize.

Balch’s research team has studied the Gulf of Maine for over two decades through the “Gulf of Maine North Atlantic Time Series.” Their experience in finding and identifying algae in this ecosystem provided key background information for testing the lidar system in what turned out to be the largest coccolithophore bloom observed in the region in 30 years.

“This cruise allowed us an ideal opportunity to try the lidar system out with the ability to sample the water and know exactly what species were in it,” Balch said. “Lidar has been used in the ocean for decades, but few, if any, studies have been done inside a confirmed coccolithophore bloom, which profoundly changes how light behaves in the environment.”

Coccolithophores thrive around the global ocean and exert a huge level of control on the biogeochemical cycles that shape the planet. Studying them is key to understanding global ocean dynamics, but field research is always costly. The team established that using lidar could potentially allow researchers to remotely estimate coccolithophore populations without stopping the ship to collect water samples — increasing their ability to collect valuable data, thus also conserving precious ship-time funds.

This work was supported by the National Aeronautics and Space Administration, the National Science Foundation, and the Virginia SpaceGrant Consortium.