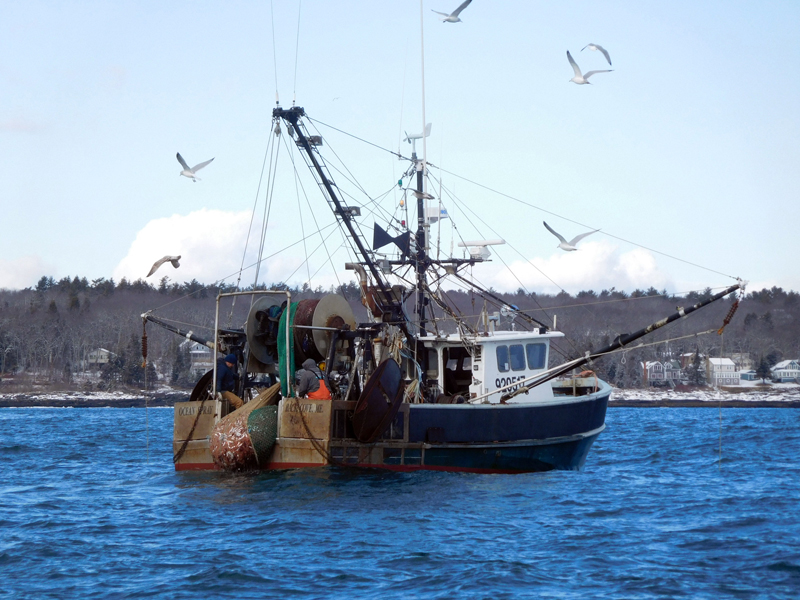 The Ocean Spray, of Back Cove, hauls in a net full of shrimp Thursday, Feb. 2. (Photo courtesy Nancy Hanna)

Shrimp trawlers Troy Benner, David Osier, and Arthur Poland Jr. were spotted in Muscongus Bay. Details on fishermen chosen to participate in the sampling program can be found at goo.gl/Tam8TH.

Maggie Hunter, of the Maine Department of Marine Resources, said there are two purposes for the sampling program. The first is to continue to collect samples of northern shrimp. Samples have been submitted every year on shrimp and DMR wants to continue to collect that data. The data collected includes the timing of the egg hatch and the size, gender, and developmental stage of the shrimp.

The trawlers and trappers participating in the program are limited in the amount of shrimp they can catch. Trawlers can land 1,200 pounds of shrimp per week and trappers can land 500 pounds of shrimp per week. They are required to turn in samples and data sheets to DMR on a weekly basis and prior to their next trip. The compensation for the fishermen participating in the sampling program is the ability to sell their catch. They are not compensated financially by DMR for participation in the program. Hunter said all the fishermen caught their limit in the first week.

DMR is watching for the relation of the hatching and survival of young shrimp to the first plankton bloom of the spring, which brings the food the newly hatched shrimp need. The shrimp carry their eggs from October to February and in March the eggs hatch. The eggs hatch early in warm water. Hunter said the shrimp hatched late last year. The concern is that if the shrimp hatch early due to warm water but the plankton hasn’t bloomed yet, there would be no food for the hatchlings.

Shrimp is available to be purchased, but it sells quickly. Docks selling shrimp include Osier’s Wharf in South Bristol, Port Clyde Fresh Catch, and Portland Fish Exchange. Osier’s Wharf sold its shrimp within an hour of being landed, so they seem to sell fast. To purchase shrimp, contact one of these docks or any local dock for information. They seem to be selling for $8-$10 per pound.