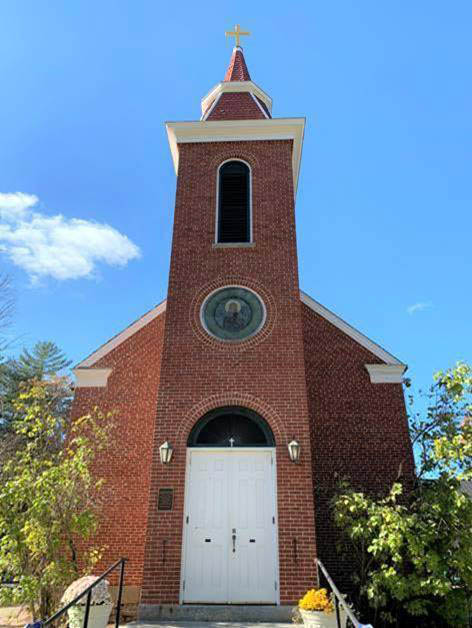 The historic Saint Patricks Catholic Church, at 380 Academy Hill Road in Newcastle, celebrates the completion of a nine-year restoration effort, and the 214th anniversary of the church’s dedication Sunday, July 17, at 1:15 p.m. (Photo courtesy Roman Catholic Diocese of Portland)

All are welcome to gather for a special celebration of the new restorations completed at the historic St. Patrick’s Catholic Church on 380 Academy Hill Road in Newcastle. A restoration presentation and reception is set for Sunday, July 17, at 1:15 p.m. inside the old church.

July 17 is the 214th anniversary of the church’s dedication. A Mass of Thanksgiving will precede the event at 11 a.m. in the new church located on the same property.

Dedicated in 1808, St. Patrick’s Church is the oldest, active church in New England and home to significant artifacts like the altar of Bishop Cheverus and a bell cast by Paul Revere & Sons. The restoration project began in September of 2021 with brickwork and masonry repairs, but the root of the restoration can be traced to 2013.

“Nine years ago, it was brought to the attention of the St. Patrick’s History Group by member Chet Hopkins that our little church was showing signs of deterioration. This was specifically evident in the roof and brickwork,” said Carrie Watson, the historian at St. Patrick’s. “How blessed we were to have a parishioner, Tom Kronenberger, who co-owned a restoration company in Connecticut before retiring to Maine.”

Kronenberger and Sons met with the parish and gave an estimate of approximately $300,000.

“The project would encompass a new roof, repointing of bricks including mortar repair, trim around the windows, and additional exterior renovation,” said Watson. “Additional funds were needed for the stained glass windows.”

The existing shingled roof was removed and replaced as the attached wood shingles were stripped off the sheathing below. Testing was done to the existing bricks and mortar from various locations to provide a recipe for the correct mortar and brick hardness. Bricks and mortar were ordered based upon quantity, size, color, and hardness. All 10 stained glass windows, including their plexiglass protection, were removed. 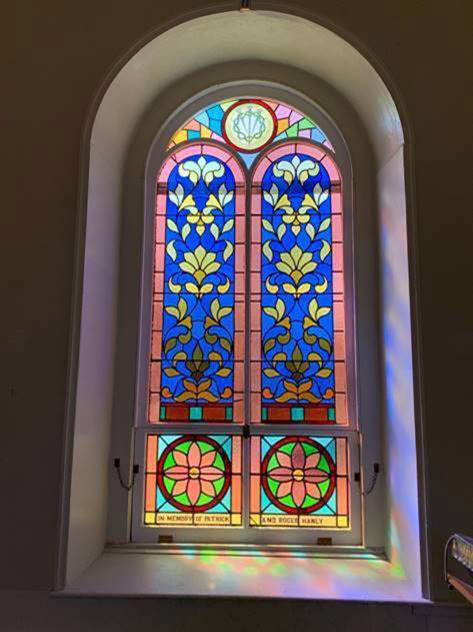 Ten stained glass windows in St. Patrick’s Church were removed and sent to Rohlfs Stained and Leaded Glass in New York to be restored. The plexiglass installed to protect the historic windows did not allow for proper air circulation which contributed to heat damage. (Photo courtesy Roman Catholic Diocese of Portland)

“The protection was part of the problem as it did not provide for proper air circulation and created what is known as an oven effect, causing the lead to melt which in turn began to cause the windows to sag,” said Watson.

The windows were sent to Rohlf’s Stained and Leaded Glass in New York were they were worked upon from September 2021, until March of this year.

The $320,000 price tag was met thanks to the generosity of parishioners and community donors; the St. Patrick’s Permanent Lay Trust Fund, formed over 60 years ago by parishioners specifically for the preservation of the historic church; and the late Rev. Thomas Murphy, the pastor of All Saints when the project began in earnest. Rev. Murphy passed away just a week after the work began.

“Father Murphy was a special person who was a constant source of inspiration,” said Watson. “His tremendous support helped us through many tough times.”

St. Patrick’s Church was designed by Irish architect Nicolas Codd and built on land donated by James Kavanagh and Matthew Cottrill, who had emigrated from County Wexford, Ireland, to Boston. The Kavanaghs, Cottrills, and others arrived in Newcastle in the 1790s. Fr. Jean-Louis Lefebvre de Cheverus, who had celebrated Masses in the area for many years, dedicated St. Patrick’s Church on July 17, 1808, having been appointed the first Bishop of Boston in April of that year. The altar used during the dedication Mass is still located in the church.

St. Patrick’s Church has long been a member of the National Historic Registry due to its historic significance.

The gathering on July 17 provides the opportunity to celebrate, reflect, and give thanks for its continued existence.

“Almost 220 years ago, pioneers came from France and Ireland and built this beautiful little jewel. We give thanks to them and remember them always. We reap the fruits of their work, and hope that they are happy with what we have done,” said Watson. “It is a sense of history that makes St. Patrick’s a special spiritual place, one for the faith of future generations.”