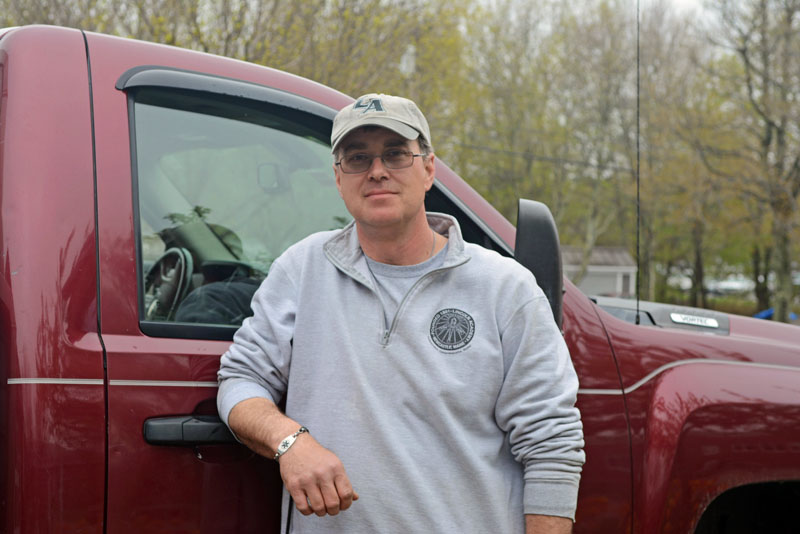 When Steve MacMaster, of Pittston, drove himself to the emergency room on Feb. 6, 2018, he thought the pain in his shoulder was a rotator cuff injury. He smoked three cigarettes between leaving his maintenance job at Lincoln Academy in Newcastle and arriving at Maine General in Augusta.

Those were the last three cigarettes he ever smoked.

MacMaster, then 43, soon found out that he was having a massive heart attack, the kind doctors call a widowmaker, when there is 100 percent blockage to the left ascending artery, which supplies blood to most of the body. “It’s the biggest heart attack you can have and survive,” said MacMaster.

After transport to Maine Medical Center in Portland, emergency surgery to place stents in his heart, and a couple of days in intensive care, MacMaster did survive. But his life changed dramatically.

For starters, he quit smoking cold turkey. “The doctor in Portland said about 80 percent of the cause was because I was a smoker.”

MacMaster also changed his diet and started exercising regularly, including doing weight training four to five times a week. “I am active at work and have a tree farm at home, so I thought I was getting enough exercise, but it’s not true. Your normal routines aren’t enough. You have to really keep your blood moving,” he said.

MacMaster started feeling better almost immediately after the surgery opened the arteries in his heart. “Right away, I could actually feel the blood flowing through my veins, and I realized it hadn’t been flowing right for years. I had no idea,” he said.

After months of regular exercise and healthy eating, his health continues to improve. “My energy is better, I feel better, I feel the difference of not smoking,” said MacMaster.

But even as his physical symptoms improved, MacMaster’s mental health suffered after his heart attack. “The worst part was I had PTSD — bad. In my mind, I thought my heart failed me, which it did.” He worried that every twinge of a sore muscle — to be expected with his new exercise regimen — was another heart attack. It took months of counseling and regular doctor visits to help him feel calm again.

As MacMaster’s health stabilized and his new routines became habit, he signed on to become a patient advocate for the American Heart Association. During the training, he learned about how to speak on camera, how to stay on message, and how to talk about heart disease in a way that helps people listen. Since November 2018, he has been speaking and volunteering at Heart Walks and other heart association events around Maine.

“My main message is to teach kids the dangers of smoking and vaping. I was a sophomore at Gardiner High School when I started smoking, and I wish I had never started,” MacMaster said.

These days, teens face a new temptation: e-cigarette use among teens is growing at an alarming rate.

“Vaping is actually worse than smoking. One Juul pod (a common brand of e-cigarette) contains the same nicotine as an entire pack of cigarettes. Nicotine builds plaque in the arteries and heart — that’s what happened to me,” said MacMaster. “Juuls are aimed at kids. Their colors and flavors are geared to young people. When I was a teenager, it was the Marlboro Man or Joe Camel. Now they have these candy-flavored Juuls.”

MacMaster hopes that his advocacy with the American Heart Association will help people learn the facts about heart disease. “Heart disease is something that many people don’t want to talk about. People who have had a heart attack don’t want to remember everything because of the trauma,” he said. But he hopes that by talking about his experience, by being open about the causes and the possibility of prevention, he can make a difference.

“Steve’s passion for keeping kids away from tobacco is at the heart of his work with us. Whether it’s sharing his story or being a ‘You’re the Cure’ advocate and contacting his legislators, he is committed to spreading the word about the dangers of smoking and vaping,” said Brenda Vitali, the association’s communications director for Maine. “We rely on advocates like Steve to further our mission of being a relentless force for a world of longer, stronger lives. More than 700 Maine advocates work every day to make sure that people in our state have the opportunity to be heart healthy. A big part of that mission is to keep young people from ever using tobacco products. We are so lucky to have heart disease survivors like Steve willing to use their experiences to put a face on heart disease.”

As for MacMaster, he is humble but determined to make a difference. “I am just a regular person. I have a Maine accent. I am not a doctor or anything. But if I had somebody I could talk to who has gone through the same things, I would have been better off. Maybe I can do that for someone else someday,” he said.