Over Easter week this year, 10 Mainers will travel to an old communist youth camp deep within what was once called Czechoslovakia. Their mission is to teach conversational English in an area called Moravia, which is part of the Czech Republic. The team members live in Waldoboro, Warren, Bremen, Union, and Auburn and are being supported by families and friends and by several local Maine churches.

Jeff Norton and his wife Rebecca Norton have been supportive of Christian ministry in Eastern and Central Europe ever since Jeff retired from the U.S. Army in 1999. During the summers of 2000 and 2001, their daughter Laura served in this same camp while she was a student at Coastal Christian School in Waldoboro. Two years later, Laura married Radek Kolarik who was one of the Czech counselors at the camp. They are now parents of five children and Radek pastors at a local Protestant church and leads English and sports camps over Easter and during the summer. The camp is filled with students eager to meet Americans and practice conversational English while enjoying sporting activities, mingling, and eating delicious Czech food.

Along with teaching at camp, the Maine team will also visit a number of elementary and high schools in the local villages and towns. Czech public school teachers are very welcoming in having native English speakers come to their classrooms where they learn interactive games as well as interesting Maine trivia, all used to introduce their students to American culture. The atmosphere is relaxed and the Americans are always surprised to learn how much English the students already know, as well as their knowledge of American history and culture. 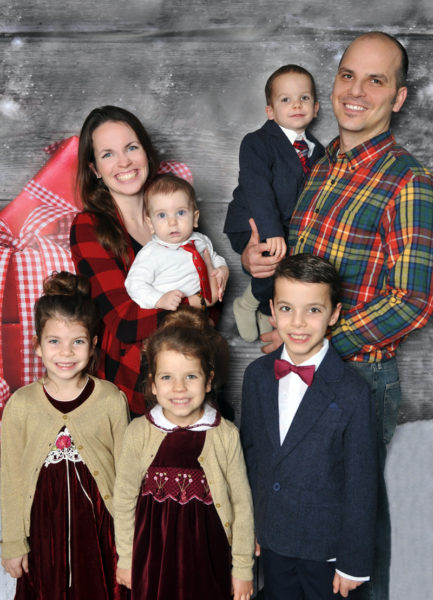 The team will travel by plane, bus, tram, and train to the small town of Kurim. When they are not living at camp, team members will stay with local Czech families in the surrounding villages. Easter Sunday brings many new faces to the Kurim church as students and teachers maximize their time together. A lunch follows the Easter service and then both Czechs and Americans take a train trip to Brno, population 500,000, where the students introduce the Americans to their city.

Easter Monday in the Czech Republic is a holiday traditionally reserved for young men to visit neighborhood girls who get hit on the leg with a woven switch decorated with ribbons. This is supposed to give the girls good luck for a family someday. The girls give the boys a treat and they leave to go to the next house. While these activities are going on in the villages, the Czechs and Americans take a lengthy hike through the countryside where friendships are further developed and English is practiced once again.

Teaching teams this year consist of five levels ranging from beginner to advanced. Phil Nicewonger, the present youth pastor at First Baptist Church of Waldoboro, and soon to be pastor of Twin Villages Church in Damariscotta, will teach the advanced class with his wife, Faith. Ethan Foss, a building contractor from Auburn, will help lead music at the camp and teach the lower advanced class with his wife, Laura. Their daughter Elodie, age two, will be the social butterfly at camp, helping build relationships like only young children can.

Rebecca Norton and Coastal Christian School senior Matt Nicewonger and his younger brother, Elijah, will teach intermediate English. Matt will also play guitar with Ethan. Jeff Norton, the team leader, will teach lower intermediate with Barry Libby, a Bath Iron Works employee and deacon at First Baptist Church Waldoboro. Ronnie Frazier, an elementary school teacher, will engage the beginner class with a Czech translator’s help. This is the ninth consecutive year that Jeff Norton has brought teams from Lincoln County to the former Czechoslovakia to teach English at camps and schools.