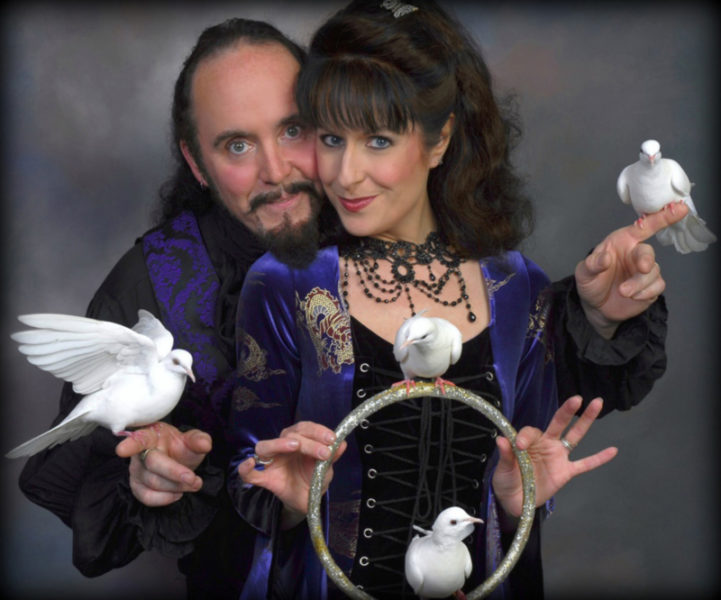 Markus and Angelique Steelgrave have brought wonder and excitement to millions of people throughout New England and beyond. The Steelgraves will make a rare Maine public appearance at 2 p.m., Saturday, March 4 in the gymnasium at Lincoln Academy in Newcastle as a benefit for Jefferson Village School’s Blessings in a Backpack program. The Steelgraves’ show will feature adorable animals, unique and amazing illusions, a sprinkling of good-natured audience participation, and just the right amount of hilarity. The Steelgraves are honored to have been invited to perform for this very special fundraising event.

Markus Steelgrave was inspired to be a magician as a child, after reading a book about Harry Houdini and finding instructions in the back of the book on how to do a magic trick. At age 13, he literally ran away with the circus, and he joined the U.S. Navy after high school. After his time on the high seas, Markus worked as a magician, a juggler, and a fire-eater. He has been a consultant for theater companies and TV commercials, and he is also a skilled balloon-twisting artist.

Angelique Steelgrave earned a bachelor’s degree in theater at the University of Southern Maine and co-founded and performed with her own children’s theater, Krackerjack Theatre Company, from 1988-2002. (Krackerjack Theatre Company performed many times for Jefferson Village School!) She saw her first magic show as an adult, when encouraged to do so by a theater director who was also a magician and needed a new assistant. Angelique was selected for the role, and magic has been part of her life ever since.

Markus and Angelique Steelgrave partnered in 2002 and were married in 2006. Magic continues to be their full-time profession, and The Steelgraves, as they are known professionally, give hundreds of performances each year, mainly out of state. They have won several awards for both stage and close-up magic, and have been headliners at magic conventions around the U.S. For the past 11 years, The Steelgraves have been the featured family entertainers for the Red Jacket Resorts on Cape Cod, where they perform for most of the summer. In Maine, TV appearances include “The Nite Show with Danny Cashman” and “Good Day Maine.”

In addition to performing, The Steelgraves are the founders and producers of Oceanside Magic International, a convention for amateur and professional magicians that takes place on Cape Cod each April (see oceansidemagic.com for more information). They are also members of the Society of American Magicians and the International Brotherhood of Magicians.

Markus and Angelique Steelgrave live in East Waterboro with their large menagerie of animals — but they have no children, so it all evens out. For more information, go to steelgravemagic.com.

Tickets will also be on sale on Saturday and Sunday, Feb. 25 and 26 at Yellowfront Grocery on Upper Main Street in Damariscotta.