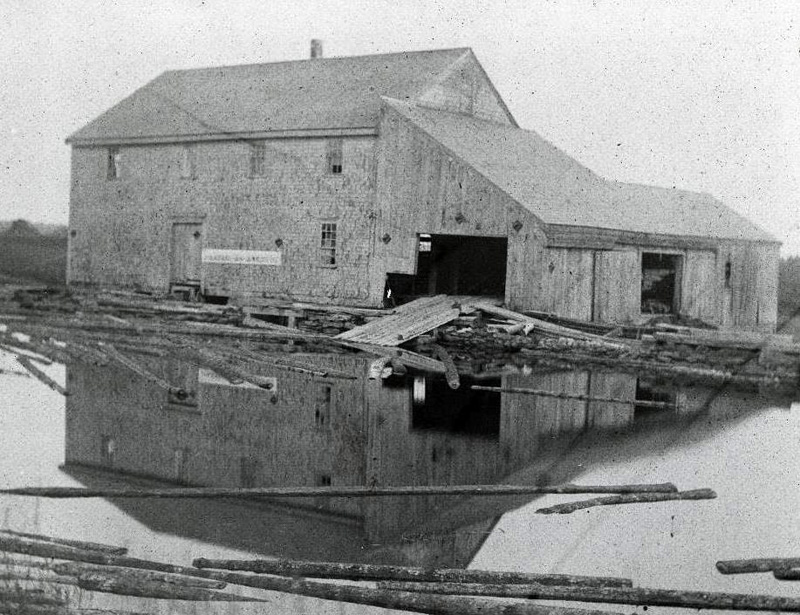 In the 1800s, when mobility was limited by the range of the horse-drawn carriage, it was more common than today for a trade or occupation to be passed along within the same family. A typical example is found in the history of mill owners at Pemaquid Falls.

From the mid-1700s to 1912, the same family (including in-laws) operated a mill at the falls. Then, from 1923-2011, the family of Chester Poole operated the mill and the succeeding retail lumber business, which retained the old mill building for lumber storage.

The location was closed in 2018 by Hammond Lumber Co. When the community raised funds to purchase the property and preserve Bristol’s last remaining mill building as a museum, it became a priority for the Old Bristol Historical Society to fill in the gaps in the building’s history.

The society is preparing an application to list the mill on the National Register of Historic Places. Principal researchers are Peter Hope, author of several books on Bristol history and founding president of the society; Paul Aldrich, an early member of the society; mill committee Chair Phil Averill; mill history team member Bill Kelley; and past Co-president Chuck Rand. The application is being prepared by Averill and mill committee members Elizabeth Thompson and Larry Hayter.

The earliest documented evidence of a mill at the falls is a 1763 survey of Henry Fossett’s property on both sides of what is now Harrington Road (the house is now owned by Bob Howell). The rough sketch, not to scale, shows the adjoining property of Robert Given, Given’s house, a mill, and the Pemaquid River.

Given, who was also a farmer and a selectman, was said to be the richest man in town when he died in 1796. Born in Newcastle, he married Jane Nickels, daughter of a commander of Fort Frederick at the Colonial Pemaquid settlement in Pemaquid Beach, and helped organize the local militia during the Revolutionary War.

Hannah Given, the youngest of their six children, was married in 1794 to retired sea captain and farmer Thomas Miller, who was born at Clark’s Cove in Walpole. Given’s two sons were lost at sea, so his widow, Jane, owned all of the Given property and the mill water privilege, but was in debt at the time of her death in 1819. Her son-in-law Thomas Miller purchased that land and water privilege at auction in 1823.

Local history author Hope suggests it was probably Miller who had the main two-story section of the present mill building built, based on architectural evidence dating the construction techniques used to the period of Miller’s operation of the mill.

Miller, in 1829, received a license from the town to sell liquor, according to Hope, and was often the high bidder for the right to harvest alewives. He died in 1831, leaving the mill and a carding machine, used to comb wool fibers, to his sons William and Gustavus.

The life of the next owner, Oakman Ford, was researched by history team member Kelley. Oakman was born to a mill-owning family in Duxbury, Mass. in 1794. He moved to Maine as a young man, purchasing a water privilege and land in Sullivan, Hancock County, in 1818 and marrying his first wife, Tabitha Beane, in 1821.

He moved to Bristol Mills and purchased a lot, water privilege, an existing fulling mill (which used mallets to clean fabric), a dye house, and carding machines in 1828, in partnership with his brother Benjamin Ford. 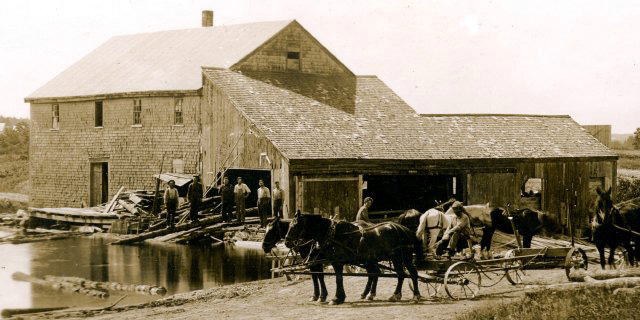 Oakman’s first wife died in 1836. Six months later, he married Sarah Miller, sister of Pemaquid mill owners William and Gustavus Miller. At about the same time, Oakman had a falling out with his brother and partner in the mills at Bristol Mills, according to Hope’s 20-page booklet, “The Mills at Pemaquid.” In 1838, Oakman sold his interest in the mills and mill privileges in Bristol Mills to his brother Benjamin, and in two transactions in 1838 and 1839, Oakman bought the Pemaquid Falls mill, water privilege, and farm property from his Miller brothers-in-law, William and Gustavus.

On the 1857 map of Lincoln County by G.M. Hopkins, Oakman’s mill is listed as a grist and carding mill. An original, roll-down schoolhouse version of that map was given by Aldrich to the historical society, and is displayed on a wall in the Bristol town hall.

Oakman Ford had a house and large barn built (the house is now owned by Jeanne Rottner) and had the original Given family house moved across the road and attached to the new house as an ell, using it for a store and post office. After his death in 1865, his son William P. Ford carried on the mill, store, post office, and farm.

The mill is listed in most annual issues of the Maine Register from 1865-1911 as a “lumber, grist and carding mill.” William Ford took in his brother-in-law William Boyd as a partner in 1873. The heading of a printed ledger sheet describes Ford & Boyd as “manufacturers and dealers in long and short lumber, shingles, laths, etc…wool collected, carded and delivered.”

The Pemaquid Falls mill is not listed in the 1850 or 1860 census of Products of Industry in Bristol.

Researcher Kelley speculates either that Oakman’s mill did not attain the minimum $500 annual production value required for listing, or that Oakman may have worked on a barter basis, exchanging his services for a portion of the finished product.

William Boyd died in 1910 and William Ford retired in 1911, ending the Given-Miller-Ford family’s run at the mill. It was sold to George Orbeton, from Rockport, and his partner, Niven Crawford, from Warren. They had been operating a portable saw rig on woodlots in Bristol for several years.

The second long family ownership period of the mill at Pemaquid Falls began when Pemaquid Falls store owner and postmaster Chester Poole purchased the mill in 1923, in a brief partnership with Elmer Elliott, a Pemaquid Falls undertaker and owner of the store and community hall that later became Riverview Market. In the 1926 Maine Register, their business was listed as a “lumber dealer” rather than a “lumber manufacturer.” Also in 1926, Chester brought in his brother William Jr. to form Poole Bros.

The mill was increasingly used for custom sawing — customers provided logs from their own woodlots — and it was becoming more efficient to bring a portable sawmill into the woods than to transport logs to the mill. In 1927, Poole Bros. was operating both the Pemaquid mill and a portable sawmill near Round Pond, and was also bringing in lumber cut by other mills, according to The Lincoln County News.

Severe flooding from a March 1936 storm at one point threatened to collapse the mill, but the building survived.

In 1949 the mill was electrified. Custom sawing continued until at least 1955, but most of the lumber sold was produced in other regions and shipped in. Custom machine planing was done on occasion through the 1960s. The mill pond was filled in and paved for parking around 1970.

Carl Sr. died in 1987. Carl Jr. bought his sister Nancy’s share and ran the lumber business until 2011, continuing to manage the three former Poole Bros. locations after merging with LaValley Lumber/New England Building Materials in 2005. Hammond Lumber bought that company in 2011 and ran the Pemaquid Falls location until closing it in 2018.

The Friends of Pemaquid Mill was formed and enlisted the Damariscotta River Association, the Old Bristol Historical Society, and the Pemaquid Watershed Association as co-sponsors of a campaign that raised $415,000 from nearly 400 donors to preserve the falls and mill, and start on restoration. DRA closed on the property near the end of 2018 and transferred it to the Old Bristol Historical Society last spring.

The Old Bristol Historical Society’s current fundraising campaign seeks contributions for extensive structural repairs to straighten and strengthen the mill, to complete construction of a walk-in archival vault in the former retail store now known as the Bristol History Center, and to begin creating Pemaquid Falls Park. Donations may be sent to the Old Bristol Historical Society, P.O. Box 87, Bristol, ME 04539, or made online via PayPal at oldbristolhistoricalsociety.org.