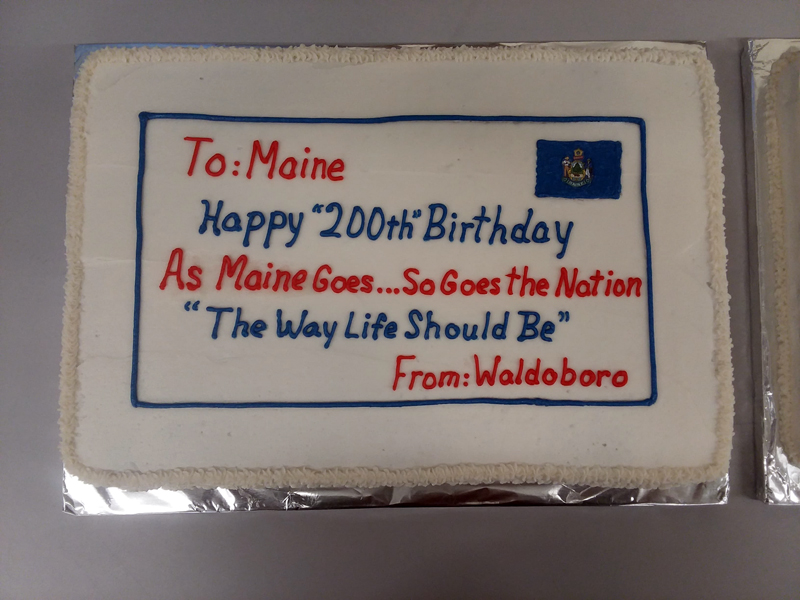 The cake from the supper celebration in Waldoboro. (Photo courtesy Bill Maxwell)

The trustees of the Waldoborough Historical Society are pleased to announce they have been designated to receive funding from the Maine 200 Bicentennial Commission for a sign to commemorate the 1820 State Seal Visual gift of Bertha Smouse.

The society will oversee the creation of the sign and its erection on the Reed Mansion site. Mr. and Mrs. Jim Derby, owners of the mansion site, have kindly given permission for the sign to be placed at the foot of the stairs facing Jefferson Street. Plans are to dedicate it on Waldoboro Day.

The grant application was written by Jean Lawrence with assistance from Waldoboro Town Planner Max Johnstone. The memorial sign is funded in part by a grant from the Maine Arts Commission, an independent state agency supported by the National Endowment for the Arts.

Smouse was 17 years old and living in the Reed Mansion when she created the needlework visual from the list of suggestions brought to her by her stepfather Col. Isaac Reed, a member of the Constitutional Committee on the creation of a seal for the new state. The seal has been used on state documents for 200 years, and while at the time Smouse received little or no credit for her work, it has stood the test of time and has been on the Maine flag for 109 years.

The society would like to thank the Waldoboro Public Library, Friends of the Library, and staff for hosting the Bertha Smouse program on Saturday, March 14. The society also appreciates the cooperation of the Soule Shuman VFW Post members and their leader John Blodgett for the efforts they gave to make the Bicentennial supper a success.

It is expected that the program given in the library will be shown on LCTV this week, so check the schedule in The Lincoln County News. Also, those on Facebook may check the Waldoborough Historical Society page.