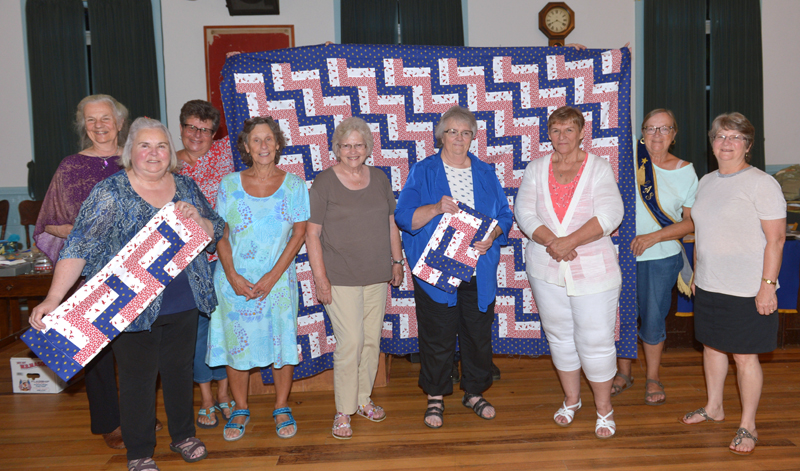 Willow Grange in Jefferson presents Lincoln County Quilters with a Spirit of America Award for their Quilts of Gratitude project. Willow Grange presented Lincoln County Quilters with a quilt top for their project. Seven members of the quilting group were on hand to receive the award. Also pictured (holding the quilt top) are Grange members Karen McCarrick and Linda Cunningham. (Paula Roberts photo)

The Lincoln County Quilters were honored on Thursday, July 25 at Willow Grange No. 366 in Jefferson. Seven members of the quilting group were presented with the 2019 Spirit of America Award for their Quilts of Gratitude project.

Lincoln County Quilters have made over 200 quilts and presented  them to veterans in the past nine years. In their first year, they presented quilts to Jefferson veterans at the North Nobleboro Community Center. They were overwhelmed by the support and the turnout of that first event and moved their presentation ceremony to the Wells-Hussey Post No. 42 in Damariscotta to accommodate more people.

They now present quilts twice a year, in the fall at Post No. 42 in Damariscotta and in the spring at the much-larger Post No. 1 in Rockland.

Lincoln County Quilters meet at the Jefferson Fire Station, which has graciously offered the space for free.

The quilts are made from material that is donated or purchased from money raised from raffles. All the work and quilting is done by volunteers.

A pie auction and lecturer’s march were held, with all proceeds going to the Lincoln County Quilters. With a donation from the grange, $200 was presented to the quilting group to be used to purchase material and supplies to make more quilts for veterans.

The program for the evening was all about quilting, with poems, skits, jokes, songs, and a quilting-themed rendition of the popular “Hee Haw” show song “We’re Not Ones to Go Around Spreading Rumors.” 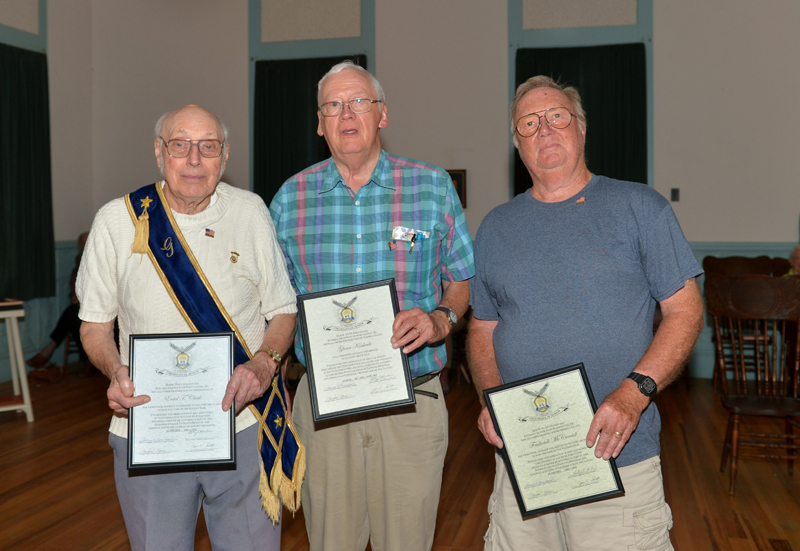 Master Sharon Morton and Secretary Laurie McBurnie presented awards to veterans Errol T. Clark (Korean War), Glenn Kinkade (U.S. Army) and Skip McCarrick (Vietnam War) from the Maine State Grange and Potomac Grange No. 1 of Washington, D.C. The certificates were presented for patriotism, courage, and service to country above self.

The certificates read: “The bravery and dedication of men and women who defend the United States, its values and interests, is not to be forgotten and shall forever be honored in part by this national Grange Patriots Program and through activities of Granges across the nation.”

One veteran said, after the ceremony, that this was the first time he had ever been thanked for his service. 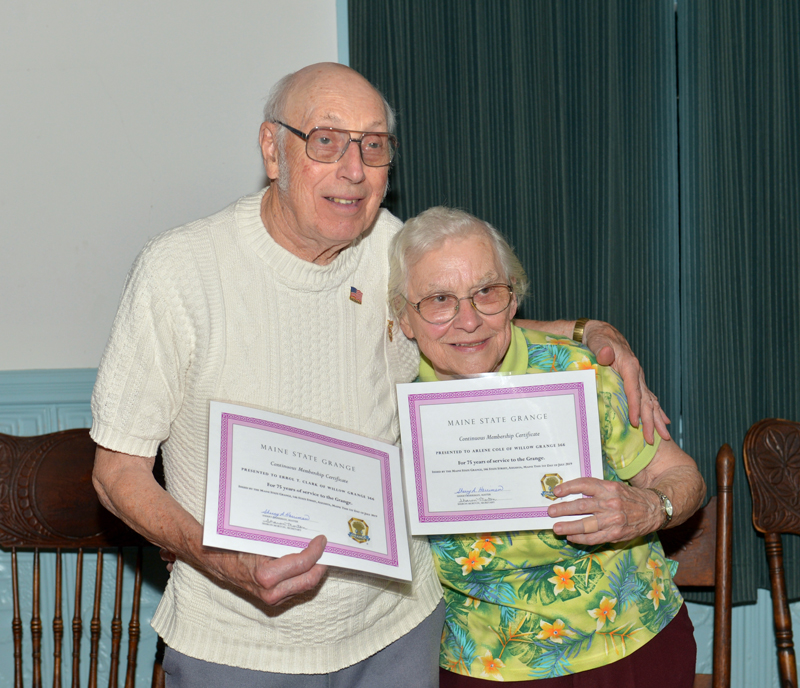 Clark has belonged to three granges. He joined West Bath while working as a laborer on a farm there. When he moved to South Jefferson, he joined Jefferson Grange, and later Willow Grange.

Forty-year certificates were presented to Errol A. Clark (2018) and Paula and Chris Roberts (2019). Katherine Hutchins earned her 60-year and Bobby Perry his 55-year certificate, but they were not present to receive them.