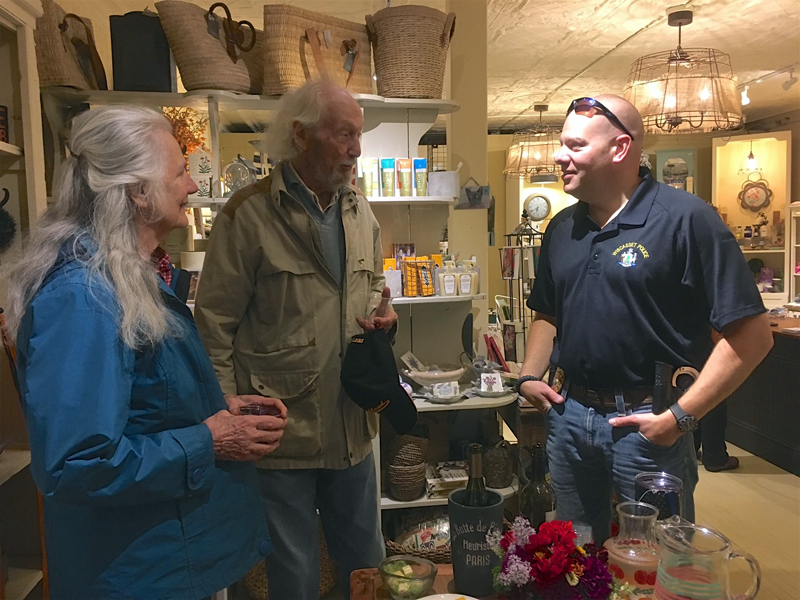 Wiscasset Police Chief Jeffrey Lange (right) talks with local residents Marie and John Reinhardt during his Chief Chat at Septembers Wiscasset Art Walk. According to Lange, community events give people an opportunity to have direct access to him, which he sees as a critical part of effective community policing.

If one spends any time in Wiscasset, one is likely to run into Wiscasset Police Chief Jeffrey Lange. While being on the job for only 17 months, he knows many of the locals by first name and it’s mostly not for unsavory reasons. During the September Wiscasset Art Walk, Lange was hosting a Chief Chat event  in Moulinette, one of the popular village shops.

“We knew the crowds would be decent” during the Wiscasset Art Walk, Lange said, “and it allows the most people to have access to ask questions throughout the evening.” He thinks local residents want to know why their local police department works in a certain way, and by giving residents access to him he is also giving them a voice in department procedures. “Having a Chief Chat allows anyone to have direct contact with the chief and ask the tougher questions,” Lange said.

In a small town, the citizens want to communicate with the police chief, said Lange. Since he’s not always available, a community event becomes an efficient way to meet and talk with residents in a comfortable setting.

Lange’s approach to interacting informally but publicly with the community is part of a nationwide initiative. The second National Community Policing week in early October, proclaimed in 2016 by then President Obama and the U.S. Department of Justice, promotes the same concept — that community policing is a public-safety philosophy based on partnership and cooperation between law enforcement and their communities.

“Police departments are not measured by enforcement alone,” said Lange. “There is a balance and being a part of the community and interacting with the citizens of that community is equally important as enforcing the law.” Working in a small community, he said, “and having the trust between the citizens and police is one of the most important aspects of community policing.” Lange expects to continue having Chief Chats and other community policing events for as long as he serves in Wiscasset.