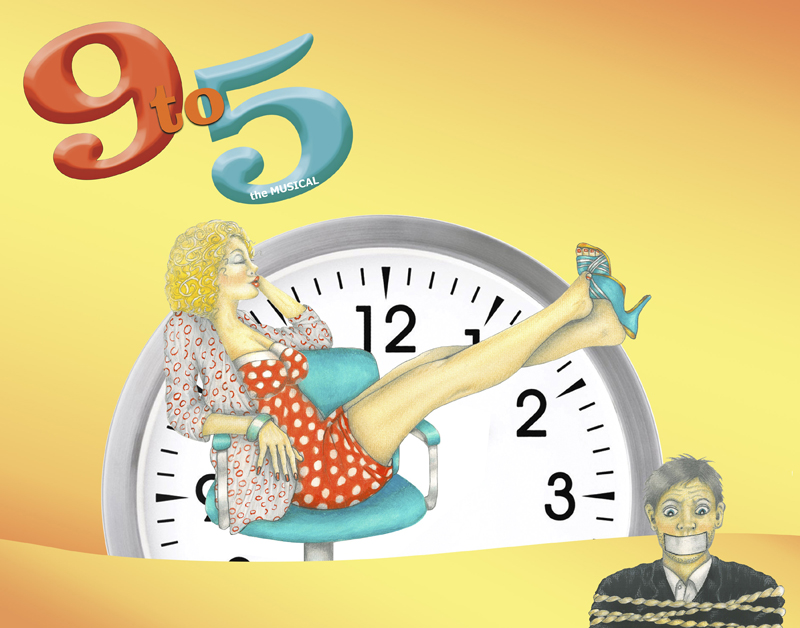 The original Lincoln County Community Theater production poster for “9 to 5: The Musical” with illustration by Lynda Riess Lathrop.

Lincoln County Community Theater, the resident theater company of Damariscotta’s Lincoln Theater, is knee-deep in preparation for this year’s winter musical. This time, the company will present Dolly Parton’s “9 to 5: The Musical,” which will open on Friday, April 6 at 7:30 p.m. for a four-performance weekend.

“9 to 5: The Musical” is based on the hit movie about three office workers who plan to get even with their egotistical, lying, and hypocritical boss. When their plan spins wildly out of control, the situation becomes hilarious and the laughter is nonstop. The show features the blockbuster title song plus a jubilant score by multiple Grammy Award winner Dolly Parton that mixes Broadway and pop with Parton’s irresistible style.

This sharp, witty musical adventure is perfect for anyone who ever wanted to string up their boss!

“9 to 5: The Musical” is adapted from the hit 1980 film, which stars Parton, Jane Fonda, and Lily Tomlin. It is the 20th highest-grossing comedy film of all time and has been named to the American Film Institute’s list of 100 Funniest Movies. Parton’s title song, “9 to 5,” received two Grammy Awards and an Academy Award nomination, and was certified platinum by the Recording Industry Artists of America. The musical opened on Broadway in 2009 and was nominated for four Tony Awards, including Best Score, and a record-breaking 15 Drama Desk Awards.

The book is written by the film’s original screenwriter, Patricia Resnick, with music and lyrics by Parton. The original Broadway cast recording received a Grammy nomination. Since its Broadway run, “9 to 5: The Musical” has toured internationally. It now comes to the Lincoln Theater stage.