“The Tempest” storms and thunders, bewitches and bewilders, and ultimately touches the heart. Heartwood Regional Theater Company once again lives up to its wonderful name. A heart can be made of stronger stuff than the soft image we promote. The heart, after all, is the muscle that must be the toughest or we would not survive.

Heartwood’s “The Tempest” shows the fierce will to survive of a father, and his determination to give his child a better life. It is not what most think of when they read Shakespeare’s last masterpiece, but perhaps they should. William Shakespeare’s “The Tempest” opens this Friday, July 15 at the Parker Poe Theater at Lincoln Academy, 81 Academy Hill Road, Newcastle.

There are times when a reviewer gets special access and Heartwood extends this courtesy willingly. On Saturday evening, July 9, the cast and crew assembled for a full-dress run-through after a grueling cue-to-cue rehearsal that afternoon and a brief break between.

For all of that, and tiny costume malfunctions aside, one would have thought it was opening night for a full house, not an audience of three, plus techies taking notes.

The enchantment at work here — and enchantment there is — is of a gentle order. As conjured by director Griff Braley, and a crack technical team of sorcerers, this “Tempest” is always lovely to behold, a curious tale of revenge and reconciliation.

“The Tempest” in these gifted hands is a living, breathing thing. The back projections bring the rolling sea to life, offer up a storm that is a true tempest, and provide the setting for Shakespeare’s unnamed magical island.

The story is simple. Prospero (played by Steven Shema), the duke of Milan and a powerful magician, was banished from Italy and cast to sea by his usurping brother, Antonio, and Alonso, the king of Naples. 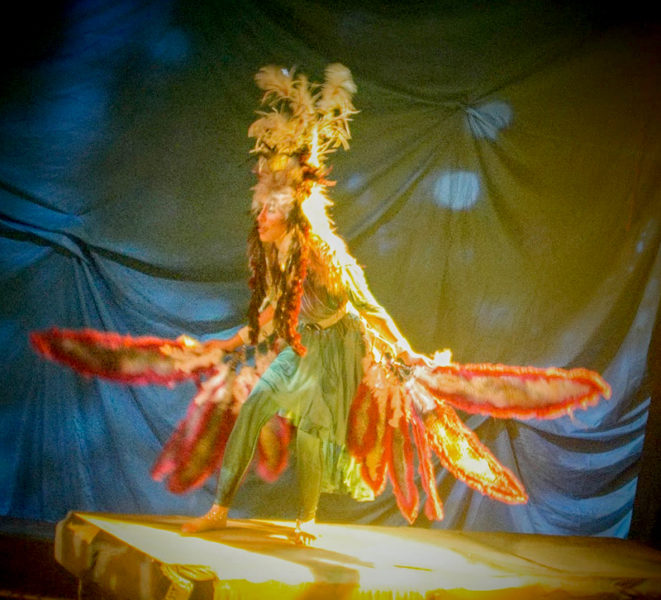 As the play begins, Antonio and Alonso come under Prospero’s magic power as they sail past his island. Prospero seems to seek to use his magic to make these lords repent and restore him to his rightful place.

Prospero’s motive may be far simpler and much kinder than it appears. Prospero is only concerned about his daughter’s future. Revenge might still be lurking in the dim recesses of his mind, but it has nothing to do with his motivations in the play.

Shema’s Prospero is tormented, brilliant, and entirely human as he seeks to return his beloved daughter Miranda (Deirdre Manning) to Italy and out of reach of wildman and slave Caliban (Patrick Sylvester). Shema’s performance demonstrates the contradiction of a man whose power resides in his ability to charm others — and his simultaneous dependence on their willingness to do his bidding. His interactions with Ariel (Helena Farhi) show this dynamic, with Prospero’s genuine and deep love for his sprite butting against his reliance on the spirit’s obedience. 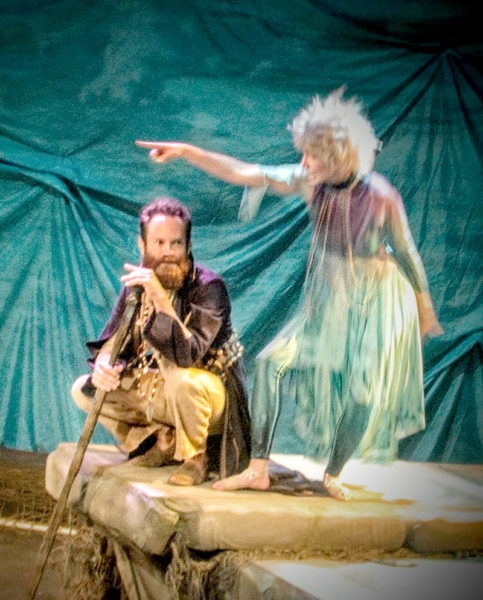 A pivotal performance comes from Farhi as Ariel, nimble and delicate, moving among the wayward mortals with delighted curiosity. It is Ariel’s tenderness that finally propels Prospero to elevate mercy above revenge.

Farhi’s sprite is an ethereal presence on the stage – slight, yet deeply physical. The stage is hers, regardless of who else is on it. She binds and bewitches the shipwrecked sailors with song, with speech, and with barely-there touch — all while

keenly aware that her physical form is the prison in which Prospero keeps her locked. Both airy Ariel and earthly Caliban provide physical interpretations that are elemental.

By contrast, Sylvester as Caliban is aboriginal, emerging from his lair as a creation of the island itself. Relentless and present, Sylvester’s performance channels the rage of the disinherited and the powerless. He is as in thrall to Prospero’s magnetic voice as is Ariel or Miranda.

Caliban the monster is present less than Caliban the truly subjugated and denied. The physicality and raw strength in Sylvester’s acrobatic performance make clear that Caliban could indeed be a threat to Miranda. He seeks to be liberated from Prospero’s yoke by means of Stefano (Jahmeel Powers) and Trinculo (Jason Osorio), who form a comic duo. By turns buffoonish and wry, earnest and knowing, their performance falls over the edge of absurdity, as it should.

The lovers, Ferdinand (Jay Pastucha) and Miranda, are as sweetly charmed and delightful as they must be — in Prospero’s power, while still conveying the impression of a love at first sight. 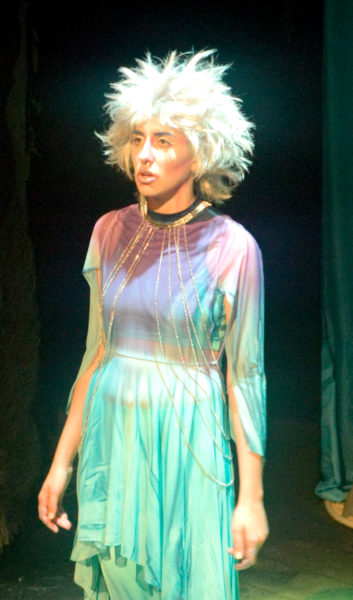 Ariel (Helena Farhi) listens to her master as he promises her freedom once she has helped him with an act of revenge. Farhi is exquisite as Ariel, moving like a breeze through Heartwood Regional Theater Company’s production of “The Tempest.” (Eleanor Cade Busby photo)

The King of Naples, Alonso (Vincent Hannam); Gonzala, Alonso’s counselor (Diana Jurand); Sebastian, brother to Alonso (Sebastian LaPointe); and Antonio, Prospero’s brother (Steven Czajkowski) round out the cast as the shipwrecked, teased, and tormented souls on whom Prospero might take revenge.

Freedom is a core issue raised by “The Tempest.” Freedom is the very breath of life to Ariel, the spirit of the air. She is grateful to Prospero for having freed her from torment in the cloven pine tree where the wicked witch Sycorax had confined her. She pines for eternal liberty and keeps reminding Prospero of his promise.

The key to the play, in the gentle hands where it has landed, lies in seeing an act of angry retribution turn into an occasion for reconciliation through the heart of Prospero and the ministrations of Ariel.

The play’s music is haunting and beautiful, written and performed by Mehuman Jonson-Ernst (guitar cello, voice, and percussion), Max McFarland (bass and percussion), and Steve Shema (accordion). Additionally, the technical aspects of the show are exquisite without being intrusive.

This version of “The Tempest” is suitable for all ages, and its relative brevity makes it possible to hold the attention of a six-year-old. The production comes in at about 100 minutes, which is magic in itself. The edits made to accomplish this final touch of sleight-of-hand are barely noticeable.