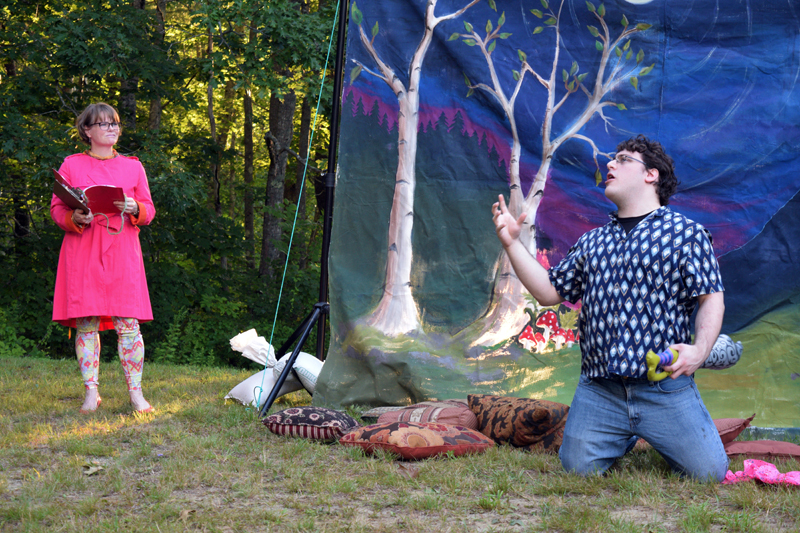 River Company will stage an outdoor production of “A Midsummer Night’s Dream,” opening Aug. 5, at Edgecomb Community Church, United Church of Christ’s Labyrinth in the Field. 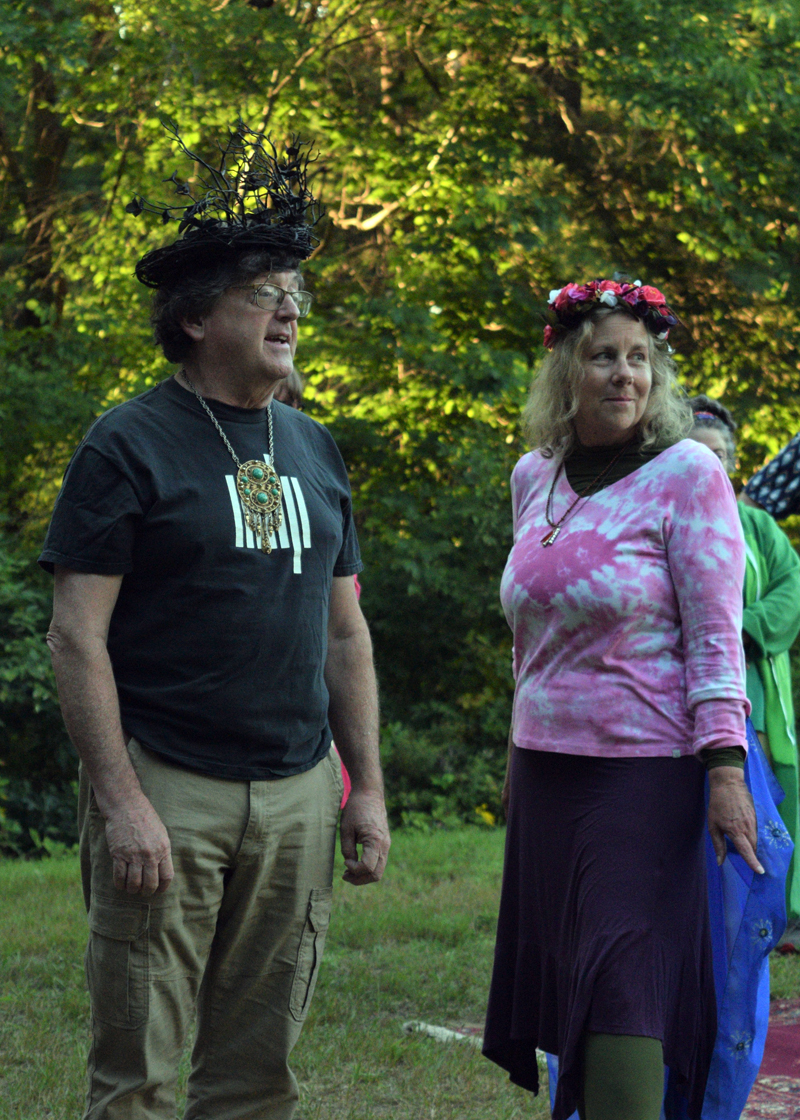 Stephen Wallace and Missie Liu perform the roles of Oberon and Titania at the end of Act 5 of “A Midsummer Night’s Dream” during a rehearsal on Aug. 2. (Nate Poole photo)

This is the Damariscotta-based theater group’s first in-person show since December 2019.

The Labyrinth in the Field is a thematically appropriate stage for a story like Shakespeare’s “A Midsummer Night’s Dream,” in which fairies armed with love potions make mischief for four lovers who get lost in the woods on a midsummer night. Behind the church, tall trees create a cool shelter within the low-lying field. The winding circuits of mossy stones imbue the grounds with a mystical aesthetic.

The idea to use the labyrinth was first proposed by Judy McQuillen, a member of the River Company’s board, as well as the church’s Labyrinth and Garden Guild.

Pastor Kate Pinkham, who inspired the creation of the labyrinth, said  McQuillen’s idea was unexpected, but she is excited to see what the company does with the space.

“It’s a community labyrinth and it’s a community space. I never suspected that someone would want to use it for a play,” Pinkham said on July 20. “I’m very excited. I’m curious to see how it’s going to be.”

Allison Eddyblouin, co-president of River Company, said she is excited to finally have a summertime show where audiences and performers can interact in person.

“Rehearsals with the live actors is just very rewarding and then having an audience is going to add so much more to that,” Eddyblouin said. “I don’t think we’d appreciate it so much without having been in lock down for this long.”

The energy was frenetic at the first dress rehearsal on Aug. 2, as actors agonized over set assembly, practiced stage falls, and whispered lines to themselves as they paced.

Director Thalia Eddy guided the actors through a series of increasingly ebullient warm-ups, reminding them that time was of the essence. “The theme of the day is speed,” she said repeatedly.

In some ways, the theme of this show’s production is speed, too, as River Company managed to put it together in just four weeks.

Eddy said the actors really enjoyed the opportunity to rehearse outside, unrestricted by the limitations of Zoom boxes or being indoors.

“It’s such a dynamic play and so moving around and being in the space has been really fun,” Eddy said.

The show is Eddy’s first foray into directing after acting with River Company for a number of years.

A theater, literature, and psychology student at Bennington College in Vermont, Eddy said she believes Shakespeare is meant to be changed and improved upon. She took a number of liberties with the script.

Inspired by the National Theater’s production of “A Midsummer Night’s Dream,” Eddy switched the roles of the fairy queen, Titania, and the fairy king, Oberon. 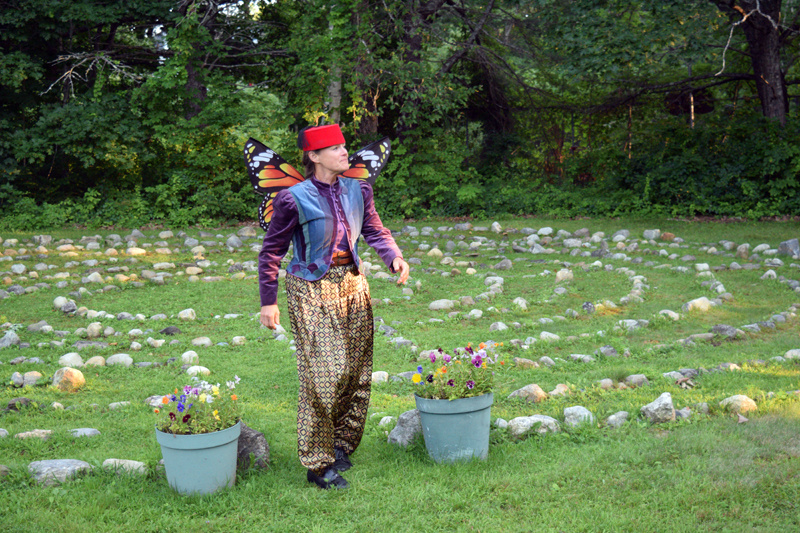 Laurie Brown as Puck approaches the stage through the entrance of the Edgecomb Community Church’s Labyrinth in the Woods, during the Aug. 2 dress rehearsal of “A Midsummer Night’s Dream.” (Nate Poole photo)

“The reason for all the kerfuffle between Oberon and Titania is because Titania is keeping her friend’s child and raising him and Oberon wants the child, and I didn’t like that Oberon gets the child in the end. So I switched it,” Eddy said.

She is excited for audiences to witness community theater veterans Stephen Wallace and Missie Liu interpret the relationship between the feuding fairy royalty.

Eddy also made some cheeky changes to the play, replacing a lion in the play-within-the-play with an alligator.

The production features folk song singalongs interspersed throughout the performance, with acoustic guitar accompaniment by Eddyblouin, who in addition to producing the show, is also and Eddy’s mom.

The set is relatively spare, featuring pillows and rugs thrown about the “stage,” with a lone backdrop painted by local artists, including Erica Qualey, Sophie Erickson, and Melissa Glendinning. Instead of complex set pieces, River Company is taking advantage of its wooded theater.

Christine Anderson, a member of the River Company’s board, performed with the company for over 10 years and was recruited late in the production to play Peter Quince, one of the play’s “rude mechanicals” that perform an impressively short play for the royalty of Athens. 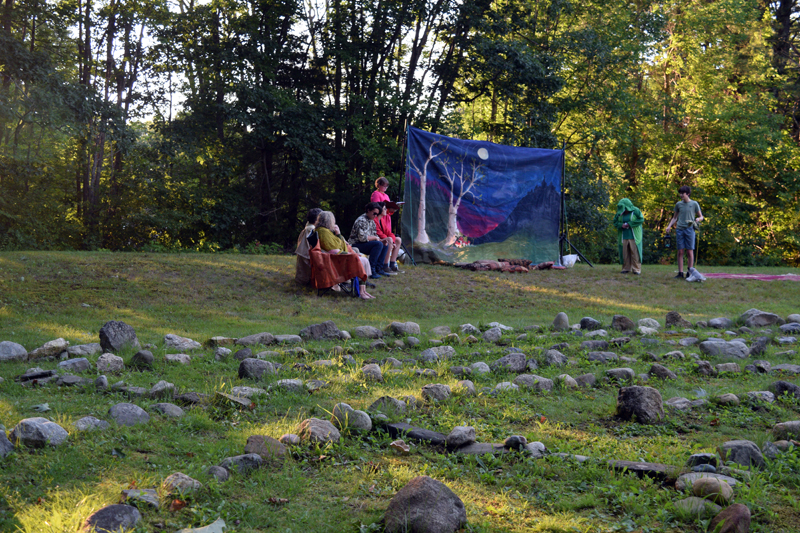 The cast of River Company’s production of “A Midsummer Night’s Dream” rehearse Act 5 outside the Labyrinth in the Woods at Edgecomb Community Church. Attendees are encouraged to bring their own food and seating. (Nate Poole photo)

Andersen said that while she’s had to work hard to learn her lines, she enjoyed growing familiar with the material and the other actors.

“It feels good. I’ve missed it because there’s an energy you get from the audience that you can’t really replace in Zoom theater,” she said.

Eddyblouin said that with the uncertainty of COVID-19 variants on the horizon, River Company will be returning to Zoom productions in the fall and winter. October will feature a production of “Dr. Evil and the Pigeons with Lasers.” Winter will bring the talent show “Santa’s Workshop’s Got Talent.”

Guests are encouraged to bring their own picnic, chairs or blankets to sit on, and umbrellas in case of light rain.

Shows start at 6 p.m. Aug. 5 through 7; and at 3 p.m. Aug. 8, at Edgecomb Community Church, UCC, 15 Cross Point Road in Edgecomb. Tickets are $10 for adults and $5 for students, available online at rivercompany.org and at the door.